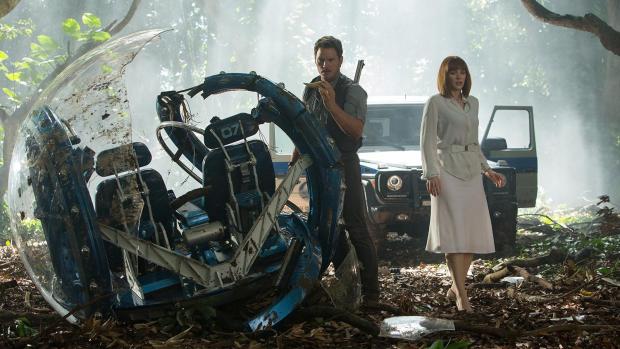 Jurassic World is the fourth movie based on Michael Crichton’s novel Jurassic Park, about a theme park where the main attractions are cloned dinosaurs. The novel was in turn based on the 1973 science fiction film Westworld, which Crichton wrote and directed, in which the main attractions at a theme park were androids used to recreate the wild west, ancient Rome, and “Medieval World.” I’d like to believe the title of the latest dinosaur excursion is a reference to the late author’s previous work, but that might be giving Hollywood too much credit.

Steven Spielberg, who directed the first two Jurassic films, serves as an executive producer on this one. It was directed by Colin Treverrow, in his first stab at a big special effects movie after the modest indie hit Safety Not Guaranteed.  He does a good job of updating Spielberg’s style and recapturing the original film’s sense of wonder. This is the most satisfying of the sequels, but you don’t need to have seen any of the previous films to enjoy it; in fact, the less you remember of the past chaos and loss of human life, the easier it will be to accept the existence of this new and improved park.

Those willing to suspend their disbelief will find a well-designed Hollywood blockbuster filled with first-rate computer imagery and the type of Spielbergian thrills that resulted in the creation of the PG-13 rating. A clever title sequence reminds us that dinosaurs probably evolved into birds, and then we’re off to the island theme park, where Chris Pratt is the engaging hero and dinosaur wrangler. Numerous sly jabs at cynical merchandising provide chuckles, with the hypocrisy of the satire part of the joke: the film is even preceded by an ad for the new Jurassic World video game. I particularly enjoyed the self-reflexive commentary on the film’s central monster, a genetic hybrid created to satisfy a jaded audience no longer amazed by mere dinosaurs. The inevitable rampage delivers plenty of mayhem, and the target audience will be sufficiently wowed to ensure a fifth film. Unlike last year’s dreary Godzilla, there is plenty of giant reptile action.

When it comes to females of the human variety, Jurassic World sets onscreen feminism back a decade or two. In the original film, Laura Dern’s scientist was every bit as capable as her male colleagues, and one of the two children terrorized by the dinosaurs was a resourceful girl who had more chutzpah than her brother. This time, the only significant female is the park director, played by Bryce Dallas Howard, a character written as an uptight career woman with no time for romance or family, lacking in any semblance of maternal instincts. Naturally, she is charged with protecting two nephews who resemble afternoon snacks to the island’s numerous species. As soon as we meet her we know that 1) the crisis will transform her into a fantastic surrogate parent; and 2) Pratt, whose job leaves him plenty of time for tequila, will thaw her frosty heart. It’s the stone age all over.