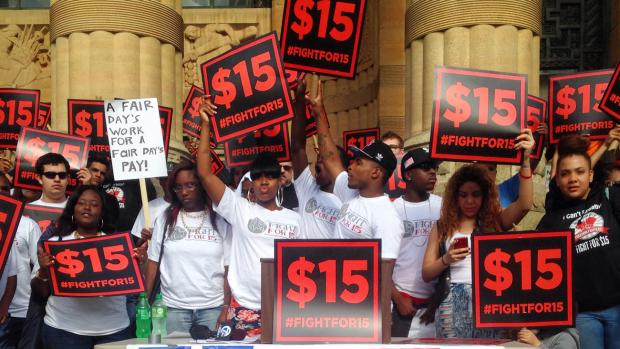 Economists, fast-food workers, union leaders, and community activists all gave compelling testimony in favor of a $15 minimum wage to the New York State Wage Board at a packed Buffalo Common Council hearing last Friday. Governor Cuomo, who favors the increase, exercised his authority to empanel the commission under very specific New York law that allows the State Department of Labor to take action for specific industries—in this case, the fast-food industry, which is an easy political target because it is dominated not by mom-and-pop local franchisees but by multinational corporations that pay their CEOs multiple millions and their shareholders multiple billions even while paying higher wages to their workers in Europe and Canada than they do here.

Same-day media coverage of the event focused on the anguished presentations of fast-food workers, many of whom work multiple part-time jobs with big burdens of chronic illnesses, dependent family members, student loan debt, and other stresses at home. Fast-food industry flacks did not present testimony, instead obtaining direct media access by corralling reporters outside the confines of Council chambers.

And though both the powerful statewide Service Employees International Union and the public-sector unions organized effectively at the event, telling Cuomo’s appointees what they already knew they’d hear, an increase in the minimum wage is not a done political deal—because it will be blocked by the Republican majority in the New York State Senate.

The problem for Republicans, though, is real and it’s present: In suburban and rural communities where Republicans customarily win Congressional and legislative seats and big majorities for Republican presidential nominees, the economic distress long associated with urban households is reaching new heights. The populist resentments that gave rise to the Tea Party are not just confined to racism and a sense of grievance about cultural elites—it’s the new experience, as the post-Crash recovery continues to sputter along, that something fundamental has shifted in our economy for the majority of households, and not just for visible minorities.

Politically, the numbers that really matter are these: The head-count of suburban Caucasians who actually admit to experiencing economic dislocation is growing. In the Buffalo area, this means Millennials and their families—people who are angry at having amassed student debt in order to obtain college degrees, people who are now working for $8 to $10 an hour, many of them living at home or in housing that is more typical of undergraduates than of adults, who confront an economy that offers plenty of low-wage work options but very few appealing prospects for escaping the minimum-wage treadmill.

Trouble by the numbers

There are indeed more jobs in Western New York today than there were during the Great Recession. But as a recent report from the Fiscal Policy Institute showed, most of the new jobs are in low-paid service occupations—and the greatest number came from an upsurge in the hospitality industry.

Around Buffalo, there were 47,200 jobs in food-service, bars, restaurants, hotels, and such in April 2007, the year the subprime-mortgage crisis started bubbling, the year economists usually cite as the last year before the Great Recession took hold. In April 2015, there were 56,400 jobs in that sector. (In April 2007 there were 59,900 jobs in manufacturing here; in April 2015, there were only 52,800.) So as long as Boomers with paid-off mortgages and extra disposable income keep going out for $8 microbrews and revival rock-and-roll concerts, there will be jobs for Millennials.

But as Buffalo State College economist Fred Floss calculated in the testimony we co-wrote, the most recent available data show that there are more than 174,000 people in our area—almost exactly one-third of all working people here—who work in job categories that have an average wage of less than $11 an hour. This means that a big share of the region’s employed people is working in jobs that don’t pay enough to help them attain economic self-sufficiency without substantial, taxpayer-funded public assistance.

Economists at the Massachusetts Institute of Technology took a look at what it takes to pay for a $600-a-month apartment, $100 in utilities, enough money to pay for food, healthcare, a used car, and other basics (not including savings, student loan payments, or $8-a-pint IPAs). Two adults living together with no kids can get by in the Buffalo area on today’s $8 minimum wage if they both work full-time.

But add a child to the mix, or two children, or take away one minimum-wage worker, or switch from two full-time workers to two part-time workers, and it gets ugly fast.

The minimum wage would have to be more than $30 an hour to keep a single-parent, two-child household solvent. A two-parent, one-earner household with two kids would need for the working parent to be bringing in $21.67 an hour. The largest categories of expenses that children bring: childcare and healthcare. At today’s $8 minimum wage, these expenses literally impoverish.

A $15-an-hour minimum wage would get a two-parent, two-earner household with two kids close to being able to make ends meet—but MIT calculates that the numbers would still be short unless each of the parents were actually bringing in $16.49 an hour.

But that’s not how the numbers work today.

In the testimony, Floss’s calculations of federal Labor Department data show that half of employed persons in the Buffalo area work in occupations that have an average wage of less than $15 an hour.

And the data from our analysis of tax returns (although they’re a couple of years old) also bear this out: Actual tax returns submitted to the Internal Revenue Service from the Buffalo area show that almost half of all reported incomes here were below $25,000. The poverty threshold for a family of four is $26,000. Below that number, people with families are literally the working poor.

Could increasing the minimum wage from $8 per hour to $15 per hour, as has already happened in Seattle and San Francisco, be a driver for economic development?

The modeling hasn’t been done in the positive—yet. But consider: With low housing costs, low barriers to entry to enterprise-formation, a more broadly available social safety net (including healthcare) than in years past, and a positive, pro-urban, pro-youth political messaging regime, the business community’s sadly conventional wisdom on the effects of a higher minimum wage may be 180 degrees wrong.

We know what the alternative to an increasing minimum wage will be: more economic stress for more families, and greater dependency on income-support measures funded by taxpayers. Economists at the University of California have calculated that New Yorkers spend between $6,800 to $15,000 per low-wage worker, depending on the presence or absence of children, just to keep the low-wage worker from falling into malnutrition, substandard housing, ill-health, and all the other aspects of poverty.

And politically, there is a cost to low-wage work that seems about to get costlier—in the form of growing populist anger that will cross the longstanding divides between city, suburbs, and rural areas. Historically, great rebellions have come about from a combination of highly visible excess for the few with the defeat of expectations for the many. Today in Buffalo, expectations of economic rebound are meeting the stubborn trend toward fewer high-paying jobs but greater numbers of low-paying jobs. If trends persist through the 2016 elections, as they most probably will, candidates for public office may well face some of the anger that was present at last week’s hearings.

Defeating the movement for a higher minimum wage may look like victory to suburban Republicans, who can be expected to oppose whatever positive recommendation the Cuomo-appointed Wage Board releases. But politically, the suburbanization of the trend toward lower wages means that working people in every age cohort are now experiencing what urban minorities have long experienced—a downward pressure on household incomes because the combination of outsourcing, part-time or “contingent” work with no job security or benefits, and rapid technological change keep all the bargaining power in the hands of employers.

The $15 minimum wage makes easy economic sense in wealthy, growing metros like Seattle and San Francisco, where the cost of everything is quite high compared to the rest of the US. Were Buffalo and the other Upstate metros to get the $15 minimum wage, chances are great that the rising tide of resentment of elites might be blunted—but also that the promise of economic renaissance, which is today otherwise hollow for Millennials, may edge closer to reality. As of now, the IRS numbers are clear: $15 an hour would give a raise to at least half of the 440,000 individuals who signed income-tax returns in 2012.