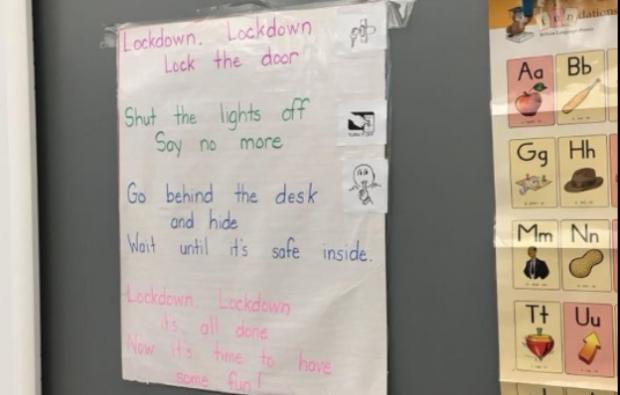 Despite the best efforts of the federal government, America is still a first-world country. Just barely.

America is unique among her peers in the modern industrialized world in that access to firearms is practically unfettered. It doesn’t take much effort for any American to amass a veritable arsenal. The gun manufacturers’ lobby — the NRA — advocates for this very thing based on a fundamental and intentional misrepresentation of the 2nd Amendment. Instead of looking at the ease with which people can arm themselves, gun activists point to issues surrounding mental health. That’s a fair point until one realizes that many of these same people spent a decade agitating universal health care for every American, including mental health services.

NEW: MSD security guard discusses how Parkland murderer had a swastika on his school bag, was a known violent threat, and that the school intervened and prevented him from having a criminal record that would have barred firearm purchase. UNREAL. https://t.co/Y2um4TLhDX

Oh, yes, by all means let’s engage Ms. Loesch in her fantastical charade. Right now, the NRA is literally on the record supporting the sale of, e.g., AR-15s to 16-year-olds who beat their girlfriends. The NRA opposes restrictions on the sale of firearms to people on terrorist no-fly list. Does she really think we believe that her organization would go along with the government preventing the Parkland shooter from obtaining a firearm because of some pesky criminal record?

When Britain had a mass school shooting, its society and government took decisive action, and that is not an event that has recurred.

When Australia had a mass school shooting, its society and government took decisive action, and that is not an event that has recurred.

Some point to knife attacks and other isolated acts of violence in Australia or Britain. Sure, restrictions on gun ownership don’t get rid of every crime, nor is that a promised result. But the difference is quantitative in terms of potential harm done. An AR-15 does more damage more efficiently than a knife or a Ford Transit on a sidewalk.

I’ll give you two reasons why that might be: 1. No other first-world country offers its citizens what amounts to unfettered access to firearms; and, 2. every other first-world country offers all of its citizens some form of universal health care, including mental health care. It’s as simple as that. This is a uniquely American problem facing a uniquely American refusal to deal with it. (Not inability — refusal).

Instead, we keep on watching innocent kids die in school. Politicians keep offering empty thoughts and trite prayers. People tiptoe around the one issue that separates the American experience from that of other free, rich nations: guns. The people who refuse to consider that guns make the difference want to arm teachers — as if gunfights in school are a good idea. Some want to turn schools into prisons — I don’t think the pods in Oz’s Em City would have made for a good learning environment. They will literally exercise door control before gun control.

And when kids speak up about it, the gun lobby and its useful protectors brand these kids as traitors; as un-American; as bought & paid for by some sort of liberal group. It rises to the level of attempted murder by SWATting.

I don’t really think our kids or yours did anything to deserve living in a country that tolerates this song, sung to the tune of “Twinkle, Twinkle” or the Alphabet song:

This should not be hanging in my soon-to-be-kindergartener’s classroom. pic.twitter.com/mWiJVdddpH

But so long as this new reality goes unaddressed by our government and our society, we might as well give the NRA a publishing credit.

There’s an element of exhaustion and hopelessness in all of this, isn’t there? Columbine, Sandy Hook — ancient history. But if the mass murder of twenty 1st graders didn’t provoke this country into doing something meaningful about average citizens’ access to military arsenals, literally nothing will. The body count will grow. Your kids, whose grandparents had to “duck and cover” from Communist H-bombs now have to undergo lockdown drills lest a disgruntled and well-armed alum bursts through the door with an AR-15 and twenty-two 30-round magazines. For what? Not all speech is protected, so how can the Constitution guarantee a person’s right to amass this sort of military arsenal? So modern-day minutemen can arm themselves against the tyranny of a group of 1st graders? The Constitution isn’t so permissive.

All of this is a broken issue in a broken, bloodthirsty country. The gun lobby and the politicians it has on the payroll will never allow our country to confront this sickness. The only thing we can do is vote those politicians out.

If you or someone you know is having suicidal thoughts, please contact the Erie County Suicide Prevention Hotline at 716-834-3131. If outside Erie County, call 1-800-273-TALK.