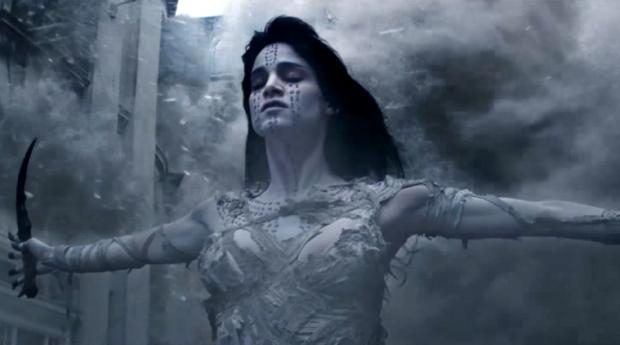 Seeking to milk several lagging franchises, Universal Studios arguably created the first “shared universe” with Frankenstein Meets the Wolf Man (1943), House of Frankenstein (1944), House of Dracula (1945) and several comedies in which Abbott and Costello met classic monsters. Nearly a century later, Universal launches a new “Dark Universe” with The Mummy, starring Tom Cruise. This time the goal is to copy the successful Marvel Cinematic Universe formula. It is no longer enough to build a tent pole franchise around a single fantastic character; a studio must create a world in which several franchises intersect and support each other.

Ostensibly created in Dracula author Bram Stoker’s The Jewel of the Seven Stars and realized onscreen by Boris Karloff and Lon Chaney Jr. for Universal, and by Christopher Lee for Hammer Studios, the mummy is typically a revived Egyptian priest who always manages to stumble upon a new reincarnation of a beloved queen. Unlike Universal’s most recent mummy films starring Brendan Fraser as a 1920s adventurer, the new film is contemporary. This time around the mummy is female and Tom Cruise (too old for the military grunt he plays) is chosen to serve as the host for an angry god. This gender swap is the smartest move in an overly busy concoction.

The spectacular first third of the film, containing the requisite Egyptian flashback and several action sequences with Cruise in Iraq, is its best. Things get silly fast when the action shifts to London, especially in a subplot featuring Russell Crowe as Dr. Henry Jekyll and his alter ego the Incredible Hulk. There’s an army of zombies, a character appropriated from An American Werewolf in London, and scenes reminiscent of Cruise’s Mission: Impossible and Tobe Hooper’s 80s opus Lifeforce. Sofia Boutella is an effective mummy, but her character takes a backseat to an origin for yet another superhero. The only thing missing is an end credits scene featuring Thor.