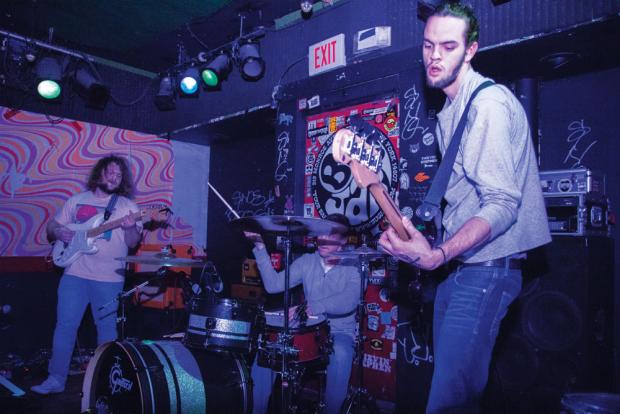 When you hear the words “underground” and “venue,” the first thing that pops into your mind is a loud, crowded, punk rock show taking place in a small, dark, seedy-looking basement. But when I arrived to the secret venue Little Baltimore, the bands there performed in the merged living and dining room of a small apartment in Allentown. So far, the warm and welcoming venue has been used by bands across the Northeast, including Whiner, Humble Braggers, Coral Colapse, and Lazlo Hollyfield. What draws local music lovers to Little Baltimore is its heart—an inviting atmosphere that radiates nothing but positive energy, with the allure of a secret society.

As far as where this atmosphere comes from, the band that runs the venue, Buffalo’s own Tomoreaux, have had a singular influence.

I’m reminded of a sunny Thursday afternoon: June 25, 2015. The headliners at the free Thursdays at Canalside concert series were Toronto’s July Talk and indie rock icons Spoon. To many at Canalside, it probably just seemed like another free summer concert; for the opening act, the concert marked their biggest breakthrough to date. It was the first show for a local post-rock/shoegaze band who would soon call themselves Tomoreaux.

“That was a big show,” says guitarist, keyboardist, and vocalist Jesse Kaufman. “It was that moment when we realized that maybe we could actually do something with this band instead of just jamming in our garage.”

Tomoreaux consists of two core members, Kaufman and percussionist and drummer Kevin Stuitje, both 20 years old. The two friends have played in bands since middle school, but teamed up only a year ago. Since forming Tomoreaux, both Kaufman and Stuitje have dropped out of Daemen College to pursue their music full-time. With their melodic thrashing and little emphasis on vocals, Tomoreaux takes much of their musical influence from bands like Slowdive and Velvet Underground. Another great inspiration on their first LP is their Buffalonian roots. According to Kaufman, “I guess it is kind of ‘cold-sounding’ music, if that makes sense. A lot of it was written during last winter, so I’m sure that had an effect.”

This geographical influence comes through majestically in the band’s debut album, At Peace, Overlook. The instrumental work guidies you through the landscapes described by both the album’s cover art, a towering mountain range and a valley full of fog, and the places used in the song titles, such as “Vagus,” “Bennington,” and “Zion.” The album sounds like a mix between bands like Mogwai and Maybeshewill, in that while the songs are simply made, the presence and atmosphere of each song is almost orchestral in power, with the rare vocals in between melting in with the melodies to make the album a rich and almost epic-sounding experience that any lover of post rock or alternative would enjoy.

Their performance at Canalside got their name out to many new fans, but the band still has a long way to go.

“It was kind of just its own isolated event. There wasn’t too much after that, but everything kind of happening at once is good too,” says Kaufman.

Since Canalside, Tomoreaux have ventured out on their first tour, hitting cities like Philadelphia, Brooklyn, and Montreal— and their van broke down only once. Not bad for a shoegaze duo from Buffalo.

With the tour in full swing and the recent release of their first LP, the future is brighter than ever. Says Kaufman, “We don’t plan on stopping anytime soon.”

Check out At Peace, Overlook on iTunes and Spotify and check their tour dates on the band’s social media pages on Facebook and Bandcamp. They play night one of BuffaBLOG’s Herd Fest, Thursday, June 16, with Lesionread, Shana Falana, and Aaron and the Burrs.