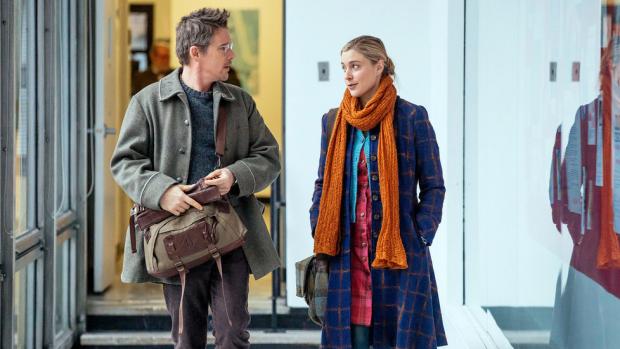 Since making the move from mumblecore into indie movies (with a barely noticed stop in Hollywood playing opposite Russell Brand in the remake of Arthur), Greta Gerwig has invented her own subgenre. Working with directors like Noah Baumbach and Whit Stillman who are attuned to smart but unruddered young characters, she has starred in a handful of features—Frances Ha, Lola Versus, Damsels in Distress, Mistress America—in which she plays women desperate for control but with no idea what she would do with it if she had it.

Another way of saying that might be that she plays pretty much the same character in every movie. (She’s co-written a few of them.) Even if that’s the case, it’s a character I’m not tired of seeing yet. Directed by another brainy auteur, Rebecca Miller, Maggie’s Plan doesn’t stray far from that template.

Maggie is a young Manhattanite who, as the film begins, has just ended her latest romance. Pushing 30 and in a reasonably secure quasi-academic career, she decides to go the solo route to motherhood and starts the search for a physically suitable sperm donor.

But despite finding a suitable candidate in a Brooklyn pickle entrepreneur (shades of Crossing Delancey, Joan Micklin Silver’s portrait of a similar woman in the Manhattan of three decades ago), the plan of the title turns out to involve something else entirely. She has a chance meeting with a New School teacher named John (Ethan Hawke), referred to by a colleague as “the bad boy of the ficto-critical anthropology department.” Sparks fly, even though he’s married to an older, more prestigious academic, Georgette, played by Julianne Moore with a topknot and a vaguely Teutonic accent that we later learn is Danish.

If you’ve seen the trailer for the film, you already know where this is heading, and what the titular plan is. If you haven’t you’re in luck, because why would you want to go into a movie knowing almost the entire plot? (A lesson too few trailer cutters seem to have been taught.) Suffice to say that modern love does the equivalent of a square dance before settling down in a place that, while not remotely unexpected, is reasonably happy.

Maggie’s Plan (the title brings to mind John Lennon’s line that “Life is what happens to you while you’re busy making other plans”) is a movie that exists to present some screwed-up but essentially likeable characters and give them witty things to say. (John points out that “‘Like’ is a language condom.” And would you argue with the author of a bestselling book titled Rituals of Commodity Fetishism at the Tail End of the Empire?) Bill Hader and May Rudolph appear to prove that the real importance of Saturday Night Live in the last few decades has been to provide dependably quirky supporting players for movies, the kind Hollywood had dozens of in the 1930s. It’s a movie that you probably won’t remember much of in a year, but that you will happily re-watch on cable. Opening Friday at the Eastern Hills and North Park theaters.

The British documentary Dark Horse is the story of Dream Alliance, the thoroughbred that won 2009 Welsh National after experimental stem cell treatment saved him from a tendon injury that, in many cases, would have led to euthanization. But the real drama in his story has to do with his birth and upbringing. His conception, upbringing and training were through the efforts of Janet Vokes and Howard Davies, a barmaid and an accountant who lived in a hardscrabble mining town in Wales—in every way as far as you can get from the traditional path for a race horse in the UK’s most upper-crust sport.

It’s an interesting story, but one that might better have been told in a fictional film that allowed the creation of scenes fleshing out the class-struggle part. With a climax that comes well ahead of the film’s ending, it’s a story that just isn’t rousing enough to justify the length of a feature film. Though that may depend on how much of a horse lover you are. It opens Friday at the Amherst.