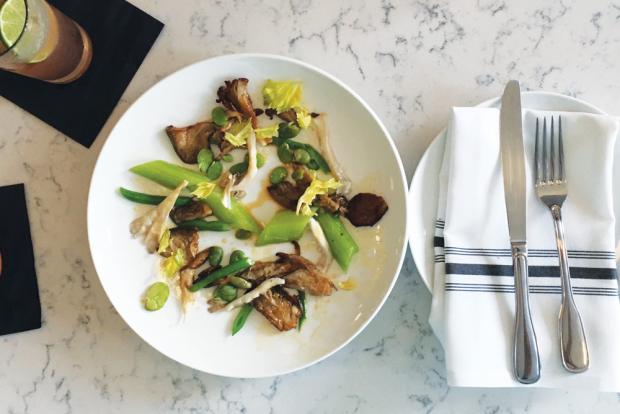 Inside Flat #12 Mushrooms, the air is thick and moist. I’m led past at least 10 motorcycles in various stages of repair to a fort of plastic bags filled with moldy straw. It’s here that Robbie Gianadda talks about cycles.

“The substrate—shredded straw and cotton-seed hulls—is soaked in a crushed limestone mixture to raise the pH. We also pasteurize, hydrate, and drain millet that has been inoculated with oyster mushroom mycelium. All of that is mixed together with the substrate and put in bags. From there they go in the incubation room for about three weeks and then to the fruiting chamber.”

Truth be told, the incubation room isn’t particularly exciting. Like so much in our lives, it is about the process. Sticking to the process is never glamorous. The glamorous part is when it all comes together, and that’s what happens in the fruiting chamber. Having conditions that are ideal (and never changing) yields oyster mushrooms with caps that are much larger than what you normally see, some peaking just past six inches in diameter.

It all started a little over a year ago in the basement of Gianadda’s Cleveland Avenue home in an 800-square-foot grow room. “It looked like a Dexter kill room, complete with plastic wrap and a zipper door.” Back then, there wasn’t talk of cycles; Gianadda was simply trying to solve a problem. His daughter was really sick and no one knew why.

“Our daughter [their first of two] developed a very serious gluten allergy. This was eight years ago; no one was allergic to gluten. It was undiagnosed. No one knew what was wrong, and we started looking for solutions, and diet was one of the things that we could control and experiment with. We started eating better and really looking at where our food came from.”

In addition to controlling their diets at home, Gianadda’s family began to choose restaurants that welcome questions about where food is sourced. “We started gravitating to places like [Bistro] Europa and Kaydara—the Rue [Franklin] also. The reason it worked out that way is that these were restaurants you could go to and ask them, ‘Is there was any wheat?’ and you wouldn’t get the stink-eye: ‘Just eat the bread and suffer!’ We had started getting in on CSAs and it went from just being responsible parents—being first-time parents you’re terrified of everything—to changing how we ate as a family.”

Slowly his daughter’s distended stomach began to shrink and her wrists, which were in severe pain, became loose and fluid.

“I think the very first time I harvested mushrooms I was at the bar at Europa the very next day and it just came up. At the end of the night, Steve [Gedra] came out and I told him I grew mushrooms and he suggested we go trip balls and I was like, ‘No, gourmet mushrooms,’ and he became very serious and made me go get them. He tried them and said, ‘Give me them! I’ll take them all.’ Buffalo Proper is currently our biggest purchaser. They go through about 40 pounds a week, which is insane. I can’t even think about what he does with them all.”

That’s the business cycle, but there is another cycle that excites Gianadda even more. “This is where it gets really hippy-dippy and feel good, but I’ve always thought of this as a complete cycle: taking agricultural waste out of the fields, making a nutritious and delicious product, to these bags [old, used substrate], which are now going back in to the ground.”

Mycelium is amazing, like most fungi. It is an underground network that serves as a distribution highway for minerals; holds down and strengthens soil from erosion, making it easier for single-root-system plants to stay in place; and breaks down pollutants. Very positive results have come from the Gulf, post-BP oil spill, and on the West Coast mycelium has proven effective dealing with Fukushima-related pollutants carried to the US across the Pacific Ocean.

We needn’t travel to distant coasts to see practical uses for the used substratum. “It’s scuzzy as shit over here [on the Niagara River]. There’s been particulates draining this way for over a century. The DEC has had to go through all sorts of spots for remediation, but they only go up to 90 percent remediation and then leave that last 10 percent because…well, who knows why. We are trying to bridge that last 10 percent using mycelium. It breaks things down on a molecular level.”

Currently Gianadda is working with a few local organizations. Vision Niagara, for one, which has some green space in a couple of lots on Niagara Street, recognizes the importance of cleaning up the pollution of the past while also maintaining green space in what has become a development-rich area. Flat #12 Mushrooms is also working with Erie Community College’s Learning Garden. The substrate is placed inside the raised beds and serves as a barrier between the heavy metals that are in the soil and what is grown on top while also breaking down any pollutants in the soil. “It’s an actual remediation tool, not just a barrier,” Gianadda remarked.

“For heavy metals and things that can’t be broken down any further, they get absorbed into the fruiting bodies and the fruiting bodies are the carrier for that which can’t be broken down. You harvest those and destroy them.” At this point, Gianadda becomes animated and his eyes dart back and forth. “That’s basically the really exciting part of this thing. We’ve been working with PUSH too, and they bring them down to Silo City where they have huge swaths of compost, and they add it. What that does, it raises temperatures and adds a great source of nitrogen to the compost, and it speeds up composting time by 50 percent. It’s taking advantage of what the mycelium is doing already and harnessing it. It’s finishing the cycle.”

He has a sense of accomplishment telling me this. And I believe him. I want to start adding used substratum to everything, but I know that it would probably be just another false beginning. Gianadda seems to understand this intuitively: “In my life there’s lots of things that are unfinished, or abandoned—all the half-built bullshit in my backyard—but here I can honestly say we’ve finished the cycle.”