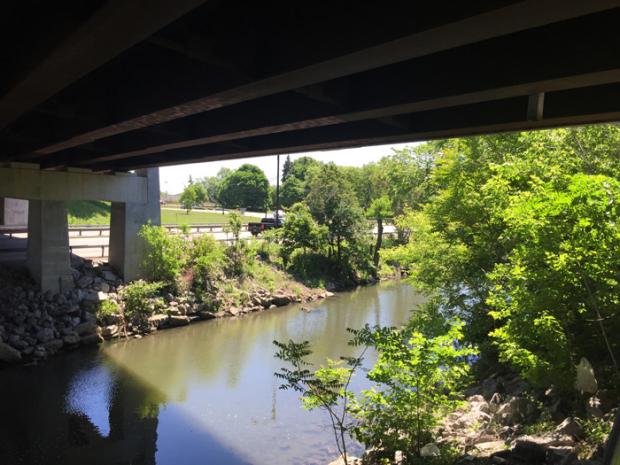 There’s been something new on the Scajaquada Expressway. Bicycles.

There have been images of bicyclists riding on the erstwhile-yet-still Scajaquada Expressway floating around the internet, enjoying the strange window of lowered speed limits instituted since last weekend’s tragic death. The expressway, no doubt, was built with some automobile idealism in mind, when—as Jack Topht raps—“driving 60 miles an hour, right through the friggin’ park” was blood brothers with personal liberty and individual expression. We’ve come full circle, as the bikes suggest, to a place where cars have become just another burden—an expensive and dangerous one at that—to bear while ekeing out something in the range of a middle-class existence. Now, no one wants a fast road.

Not even a fast road lined with parks, riparian stands of trees, and a range of architecture from Tonawanda Street’s Trico plant, the Blessed Sacrament Church on Amherst, the museums, and of course, Buff State’s monolithic Moore complex, virtually unchanged from its 1970s curb appeal.

The Scajaquada, for years, has been the most scenic stretch of graded road to open up on in Western New York. There are no shoulders and few places to pull over, so the expressway’s speed limit is rarely, if ever, enforced. Instead, the Scajaquada relies on its twists, turns, and hazardous off and on ramps to naturally check a driver’s speed. Many of which are insufficiently designed to handle 60 miles per hour traffic. It took me years to figure out that the safest way to enter the road heading east from the David statue was to gun the engine up the hill and merge at close to full speed.

The expressway should have never been, but how could they resist building it? American cities have survived the period of rampant automobile-infused speculation which witnessed every waterway and river’s edge being cut up, diverted, buried, and built over. It became a logical thing to do, 3.7 miles of the Scajaquada Creek had already been buried under Buffalo’s East Side during the 1920s, officially turning Olmsted’s “Gala Waters” into a sewer. Why not build a highway along the Niagara River and build an arterial right up its tributary?

In the wake of the tragedy, it’s been easy for an elected official to rail against the road. Dead children make a great political cause célèbre, just ask Tim Kennedy. The truth is that in all the years that fast traffic has zoomed within feet of park road, this has never happened. And we could likely go another 50 years before it happens again. The political will exists currently to get something done, but the price tag will temper anyone’s resolve.

Fixing the road means fixing the creek, and that means reversing 100 years of blindly destructive civil engineering, and hundreds of millions of dollars. For the foreseeable future, were stuck with an expressway with a speed limit completely out of proportion to its design and a waterway that is little better than an open sewer.

Everytime it rains, every time the snow melts, the sewers that serve 94,000 people from Depew to Black Rock overflow right into the creek.

From Dan Telvock’s 2014 report on the Scajaquada Creek:

The overflows into the creek occur often—283 times in Cheektowaga alone over 12 months ending this past May. That’s more than any other municipality in the state with a similar sewer system, according to data collected under the Sewer Pollution Right to Know law.  In 2013, the town reported to the DEC overflows totalling more than 300 million gallons of raw sewage mixed with dirty stormwater into the creek.

As a result, the water in some spots of the creek has fecal bacteria readings 20 times higher than what’s considered safe for recreational use.

In addition, five feet of sewage sludge blankets sections of the creek’s bed—a breeding ground for the avian botulism toxin, according to DEC records.

And the price tag and timeline is geologic in scale, in comparison with other public works projects:

While the Buffalo Sewer Authority and the Environmental Protection Agency have agreed on a $380 million dollar plan to significantly reduce sewage overflows throughout the city, the work is spread over two decades. It could take up to 16 years before all of the work benefiting the Scajaquada is completed. Even with the improvements, the agreement will allow for the continued dumping of up to 52 million gallons a year of sewage and runoff.

That’s $380 million and 16 years just to reduce the sewage by 80 percent. How much more will it cost to remove the expressway to create a new parkway and then dredge and clean up the creek that people can enjoy being near, let alone fish in? It’s one thing to save a child, but saving a river is a much harder sell.