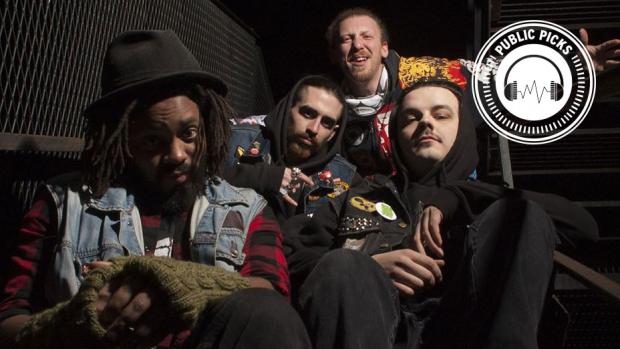 Hip hop punk crossover act Rap and Destroy have released a new music video for their song “Act Like UGAF.” The gritty, distorted video features rappers OLMEC, Tr38cho, Ideal and sparKmatiK hijacking your TV screen with bizarre imagery, goofy graphics, and ruthless rap flows. Since its release in early may, the video has garnered over 100k views on Facebook.

The in-your-face single comes from the group’s upcoming album, their second full length release titled R.A.D. AdVice, which also features the Buffalo-based rapper Vice Versa. They group will celebrate the release of their new record this Friday, at the Gypsy Parlor. They’ll be joined by Slow Cooker, The Serftones, Dads Home, and Glued.

Below Ground is an experimental electronic music album by Sadler, released at the end of May. The record is a compendium of ambient sounds and experimental noise tracks created with tape loops and effects pedals by artist Joseph Randolph. Highlights from the five-song EP include the soaring 9 minute long ambient epic “Ascent Blackout,” and the more intense and heady, “Descent,” both of which stick to the deep sea diving theme of the album.