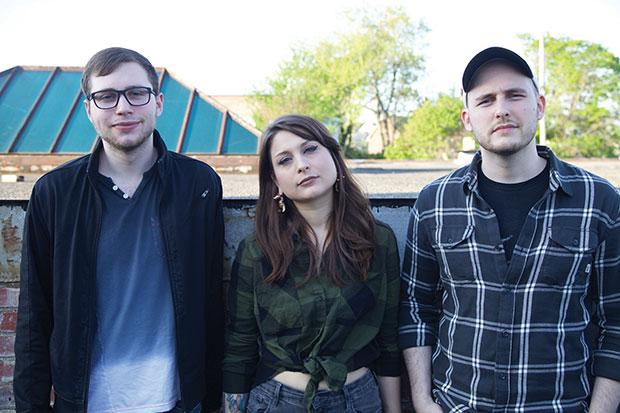 Cooler is a rising Buffalo indie band whose self-proclaimed genre is “2002 Redux/Phantom Phuzz.” The first part gives a pretty solid picture of the kinds of pop-punk and emo heartstring tugging you can expect from their songs, while the second part allows for some mystery: it might be the spectral shimmer added by the fuzz-pedal distortion they favor, or a playful statement of emancipation from any pre-defined genre, or both, or something harder to name. Regardless, they liked Phantom Phuzz enough to make it the title of their latest release, a 2016 EP on Admirable Traits.

Shaking out my umbrella, sitting down for coffee with Alley Yates and and Nick Sessanna of Cooler in a Greek diner on Elmwood, my mind is on the struggle of committing to a creative project while making enough money to live. Maybe it’s a trick of the rain, but the landscape looks bleak lately, with the cost of living continuing to soar in major U.S. creative hubs like L.A., Oakland, Chicago, and Brooklyn (where I lived until recently). What are the options for young artists now? Barring nefarious revenue streams or trust funds, how are they making the space and time to develop their practice without going broke? For Cooler, the question has had real-life implications in at least one major way recently: at the start of this year, what was once a four-piece shrunk back down to the founding three, with the departing member citing non-music-career priorities as a factor.

Sessanna plays guitar and sings in the now-trio (though he started off as the drummer). When I ask what non-human thing he would want to be reborn as, he first chooses a tree, then changes his mind—a bird of prey. Trees can’t move. Regarding the recent downsizing, he diplomatically explains: “Life gets in the way.” As he elaborates he hints at more complicated dynamics at play. But the point he wants to emphasize—which all three of them drive home—is that they’re ready to move on, and to make the best of their current shape.

Besides Sessanna, 27, and Yates, 26, who also plays guitar (and doesn’t miss a beat before answering “cat” to the reincarnation question), there’s Adam Cwynar, 22, (“hyena”) on bass; they all sing, too. Adam couldn’t be here in person but he’s Skyped in on Nick’s phone, propped up between salt and pepper shakers, and intermittently audible. All three have had plenty of experience making the most of change in their music careers, whether it’s a shakeup in a group’s roster, a breakup or a new start. Each of them describes an emphasis on developing their personal musical practice that underpins their work as a group, which is otherwise motivated by a deep respect for the power of collaboration.

Yates is having a Bloody Mary (it’s her day off) and wearing these remarkable, brass teddy-bear earrings the size of oyster shells. Her start as a singer-songwriter came early: not long after receiving her first guitar as a gift at age 10, she started playing talent shows. A few years later she was already finding an enthusiastic audience: “I left home really young. So my senior year I was on my own, and I remember going into a bar in my hometown, and being…just so young. I started playing open mics, and a couple weeks in, somebody was like, ’Hey, how old are you?’ [But] I got grandfathered in because everybody loved me…” She went on to play in a series of bands locally and continued writing and performing solo (including a stint in L.A.) until meeting Sessanna, who’s now her boyfriend, and with whom she started Cooler shortly thereafter.

A sweet tendency to finish each other’s sentences aside, I want to know if they see any challenges to being in a relationship and a band together at the same time. “What happens at band practice stays at band practice!” they laugh in unison. But it turns out there’s a little more to it. The song “Metal Moths,” for example, the obvious single off last year’s Phantom Phuzz, is about regretting the barbs you throw in an argument with a partner. Yates explains, “We’ve tried so hard to keep our relationship separate, but you can’t deny it if your relationship inspires a truth that so many people experience, you know?” They both say the process of writing songs that articulate the unsayable has helped them work through disagreements in the past. But on the whole, they harmonize naturally in a classic case of opposites attract. As Sessanna explains, “I think that’s why things work out for us, is I am the stability and she’s the free spirit.” Yates adds, “Yeah. I’m like, ’Hey, let’s do this crazy thing!’ And he’s like, ’Yeah, and let’s also do this really smart thing at the same time!’”

Sessanna’s entry point into music was a love for the pop-punk and emo bands of the early 2000s—but it wasn’t that sound alone that inspired him, it was the idea of being in a band, of several musicians working together on a shared project. Since he started playing and writing songs at 14, he says, that passion “…has navigated every decision I’ve ever made in my life.” Cwynar, too, began at 14, on drums, and from there picked up bass and guitar.

Their versatility as instrumentalists helps foster a spirit of collaborative authorship among all three band members. Short a drummer, Sessanna and Cwynar alternate filling in, at least when they’re writing. (For performances, they borrow friends from other bands.) In the past, individual members wrote songs alone and that was that. Now they intend to operate as a collective. “It’s been interesting to see where everybody can put their touch,” says Yates. “And it’s always been really shocking to me, when I thought something would turn out one way—something [I thought] I couldn’t give up—I gave it up and it turned out 100 times better.” No word yet on whether the new configuration will change the sound. “We’re ready to explore what happens next,” Sessanna says, “and we’re not really putting any boundaries on that.”

Cooler’s artistic agenda seems simple: they want to write catchy songs. That doesn’t mean pop, necessarily. But it does have a lot to do with tapping popular emotions, especially nostalgia. They’re not shy about putting the theme out there: their first EP was called 1993, and there’s even a song on Phantom Phuzz named “Nostalgia.” It’s right there in their sound, too, in a certain channeling of bygone angsty standbys like Brand New, Blink-182, Smashing Pumpkins and Motion City Soundtrack—which has a double-down effect now on a millennial audience that idealizes the music of that time as the soundtrack of their teens.

But this is no basic throwback project. It’s more about carrying on what was timeless about 1990s grunge and pop-punk and 2000s emo, in a new way—Sessanna again: “…it was just this emotional—I don’t know what to call it—a weight. Between the lyrics, and the quiet-loud…they delivered those one-liners and it was like, ‘Oh I relate to this so hard, this is exactly how I’m feeling.’ And I think we’re trying to take that, with Cooler songs, and we’re trying to simplify it, so it’s real catchy, it’s something people want to listen to.” And they’re in good company. Sessanna (who also writes for buffaBLOG and supports their sister company, Yace Booking, with event management) and Yates agree indie emo has been enjoying a moment lately, especially in Buffalo, but nationwide too, in acts like Mansions, Tigers Jaw, Pity Sex—a mutual admiration for whom Cwynar, Sessanna, and Yates first bonded over.

On Cooler’s horizon this summer is the goal of expanding their sphere of influence to include out-of-town bookings across the Northeast, a healthy schedule of local shows—including a gig at Nietzsche’s on Friday, June 16 as part of BuffaBLOG’s Herdfest, and at the first time local music festival Cobblestone Live!, which also features the popular indie rock band Real Estate—and a new EP forthcoming later this year.

But to return to my earlier question about making a life in music while juggling all the other obligations of adulthood, Cooler is cool about it. What comes through loud and clear is their nose-to-the-grindstone dedication. “At the end of a long day of work, it’s so easy to sit down and not want to be creative,” Sessanna says. “Being creative is work, it’s like leaving your job to go to another job…I don’t blame anyone who decides to forego playing music or making art for a different life. Being an artist is always going to be a labor of love.”