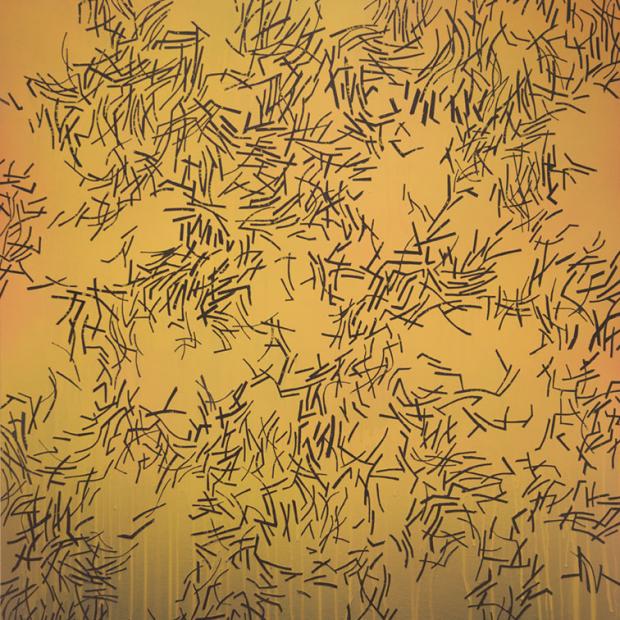 The emphasis on brushstrokes led to the preference for line and to the attention given to linear rhythm. Line is the primary means of expressing movement. Line in relation to space creates rhythm in the composition and also represents the inner rhythm and harmony of the yang line on the yin paper, of yang expression across yin space…It has often been remarked that the brush dances and the ink sings. Calligraphy at its finest and most expressive is indeed the dance of the brush and ink at its highest point of achievement, when movement, vitality, rhythm, and harmony are uppermost and the intellectual content of the written characters purposely is abandoned in the swift rendering of them by the perfectly disciplined and therefore completely free brush. Absolutely natural and spontaneous brushwork is like the flight of a bird. And works of calligraphy of this caliber might truly be described as the prime examples of abstract art.

Artist Kyle Butler doesn’t use brushes or ink in his latest series of works on show at the Nina Freudenheim Gallery, but the results and effects are much like those of classic Chinese painting. Butler’s works are abstract and hard to characterize—like so many flurries of paper shredder product blown or strewn across a panel as canvas—but comparisons to lines dancing across a page, or the flight of flocks of birds, or Chinese calligraphy—not as verbal language but in visual terms, what the written characters look like on a page—come readily to mind.

As to technique, instead of brushes and ink, Butler first coats a base panel with a layer of graphite, then applies narrow-width short segments of tape—the size and shape of shredder output—to the coated panel, then spray-paints—usually a single color, but with subtle gradations—over panel and tape, and then carefully removes the tapes, leaving the tape application little black lines—straight or curved or bent or broken, in clusters or patterns or more or less homogenous scatter arrays—against the spray-paint color. (Which is foreground and which is background—the black lines or the color field—is an interesting but esoteric question in the context. It doesn’t seem to be a main issue.)

An alternative technique in several cases consists of simple drawing in pencil on unprepared panel, resulting in works of similar general character to the graphite and paint and tape works, but usually of somewhat more intricate and elaborate design in these cases of black lines on white.

All works are insistently non-representational, but as often with abstract artworks, representational hints and suggestions creep in. Like dance of lines across a panel in a piece entitled Stale chips. Or flocks of birds in flight in a piece called Murmur. Individual titles don’t seem to mean much, except in a few cases where they might. Such as this case. Flocks of European starlings—famous for their shape-shifting dense to tenuous cloud formations against winter skies—Dante mentions this awesome sight—are properly called murmurations. Or Chinese calligraphy—albeit in fragments, whereby semantic content is purposely abandoned—in a piece called Parsing spilled contents. Another Asian art reference for this same piece—Japanese this time—might be Hokusai’s fractal fragmentation great wave.

Chance but at the same time and in equal measure necessity seem to be design principles for this work. Amid apparent random organization and arrangement of visual subject matter, a sense of ultimate disposition of the line segments and clusters by laws of physics force fields. Conspicuously in a piece called Lean into it.

As regards chance, a title that might mean something is Rile. As a variant of the full exhibit title Roil, and evocative of the similar in sound and sense term “turmoil.” Which term readily describes the Rile piece. Paper shredder product caught up in a whirlwind.

As regards necessity, another title that might mean something is Muss. For a piece that rather calls to mind a haystack. Muss as mess, disorder. But possibly—possibly—also this word in the Beethoven usage. Es muss (sein).