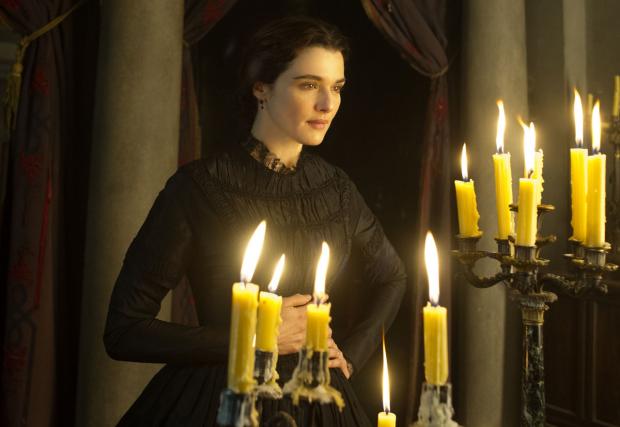 The movie dominating multiplex screens this week is a reboot of The Mummy, the 1999 version of which I remember fondly for one reason: Rachel Weisz. Even at that early stage in her career, it was evident that she was too talented to be wasting her time in that kind of folderol, yet she threw herself into it anyway. (That the new version asks us to gaze instead on the beauty of Tom Cruise won’t get me into the theater for it.)

Weisz did indeed move on to better roles, along the way picking up an Oscar for The Constant Gardener (though if you ask me she deserved one for Terence Davies’s adaptation of The Deep Blue Sea). This week finds her starring in another remake of a 1950s potboiler, in the role that Olivia de Haviland once played against Richard Burton.

My Cousin Rachel is set primarily on an English country estate in the first half of the 1800s. It may at first seem like Thomas Hardy territory, but the excellent photography of the dangerous cliffs overlooking that craggy shoreline lets us know that we’re in Cornwall, on the southwestern tip of the island.

Our hero is Philip (Sam Claflin), who was raised by his cousin Ambrose after he was orphaned as a child. Ambrose never marries, despite advice that Philip needs a mother’s influence. While the boy is off in London getting an education, he takes ill and is sent to Italy to recuperate.

Those of you weaned on film adaptations of E. M. Forster novels know that Italy is where stodgy Brits go to get their groove back, and Ambrose falls in love with Rachel, a widowed cousin he meets there. His letters home to Philip, back from school and determined never to set foot off the farm again, are filled with happiness at this new turn in his life. Except the last one, where he raves that his new wife is trying to kill him.

When news of Ambrose’s death comes to Cornwall, Philip understandably blames the woman he has never met. He plots his revenge, as the audience wonders whether all this gay subtext is intentional or not. (Asked previously if he wasn’t happy to hear that Ambrose had found a wife, he replies, “Why? He has me.”)

But when Rachel shows up in Cornwall to meet Ambroses’s other heir, it’s a different story. Philip, who seems never to have met any other woman in his life save the local girl Louise (Holliday Grainger) to whom his guardian is clearly hoping to marry him off, is soon smitten with this woman who says things like, “I hadn’t realized how very much you looked like Ambrose.”

Based on a novel by Daphne du Maurier, to whose Rebecca you can spend time playing compare and contrast, My Cousin Rachel is an incessantly shifting story of “Did she or didn’t she?” Literary types like to call this ambiguity, but director Roger Michell, who also wrote the screenplay, doesn’t quite have a handle on that device. Instead of keeping us off guard about Rachel’s true history and nature, he provides us with sufficient evidence to support whichever interpretation you want to argue on the drive home from the theater.

It Comes at Night opens with an older man, clearly ill with some undefined disease, being tended to by two people who call him Dad, and who tearfully wheel him out to the backyard, shoot him in the head, and burn his corpse. Clearly we are not in rom-com territory.

Where we are, though, is less clear. With its action confined mostly to an isolated house in the woods, Trey Edward Shults’s debut feature initially appears to be a horror movie. Joel Edgerton is the father who hopes to keep his wife and teenaged son safe from a plague that appears to be ravaging the area, if not the entire world. He takes a chance by letting another nuclear family—younger man, wife, toddler son—share their safe zone. But can he fully trust them?

It Comes at Night is a handsome low-budget effort in which cinematographer Drew Daniels turns his liabilities into assets, squeezing all the atmosphere he can from the dim interior of the lantern-lit boarded-up house. But persistent close-ups on teenaged Kelvin Harrison Jr. seem to be asking questions that the film never gets around to dealing with. All it leaves us with by the time its over is something we already knew, that life is something from which no one emerges alive.