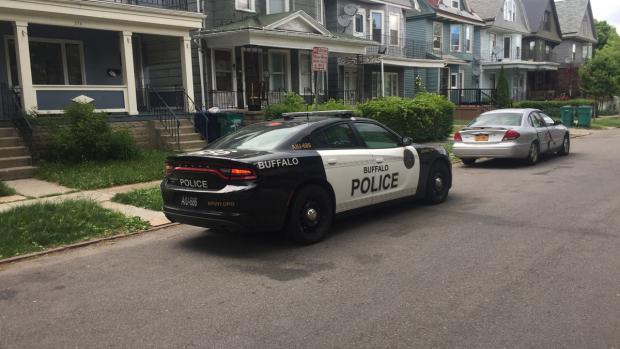 A Buffalo Police Department Accident Investigation Unit patrol car. State investigators, who have faulted BPD investigation practices in recent reports, are looking into the fatality of a pedestrian hit by a BPD car in March.
by
Aaron Lowinger
/ Jun. 6, 2018 9am EST

Three times since late March, Buffalo Police have been involved with pedestrian collisions causing serious injury and death, and each of these accidents have been investigated by the  Buffalo Police Department’s Accident Investigation. But according to a report issued by the Office of the Attorney General (OAG) of New York and ongoing concerns regarding the lack of training protocols within the BPD, the AIU’s ability to properly investigate serious collisions may be compromised, and the BPD recently asked State Police investigators to handle the accident reconstruction of a North Buffalo woman struck and killed in a collision with a police vehicle.

On March 30, an officer, en route to service call without having activated the car’s lights or sirens, killed pedestrian Susan LoTempio on Hertel Avenue. On May 2, an off-duty detective on her way to work struck and critically wounded a 19-year-old SUNY at Buffalo student on Main Street near Custer Avenue. The next day, an officer collided with a fou-year-old on Oneida Street, resulting in head injuries.

The OAG’s report on the death of the unarmed Jose Hernandez Rossy, ruled a homicide by the medical examiner, faulted BPD the most on its “failure” to perform a proper accident reconstruction investigation so that investigators could determine what happened immediately preceding the chaotic final moments of Hernandez Rossy’s life, what the report called a  “calamitous confluence of events.”

“The BPD did not perform any accident reconstruction until being asked to do so by the OAG,” the report reads. “While not central to the determination of whether the shooting was legally justified, determining what transpired prior to the shooting would have been helpful to complete the full narrative of this incident. BPD’s failure to immediately commission reconstruction undermined that ability.”

“The collection of evidence was problematic,” the report’s conclusion reads. “For example, the BPD’s technicians failed to perceive the need to analyze Mr. Hernandez Rossy’s vehicle for forensic evidence and instead only processed the vehicle in order to search for the weapon Mr. Hernandez Rossy (supposedly) used to shoot PO Acquino. Similarly, BPD also failed to conduct (or even perceive the need for) any type of accident reconstruction. And, the evidence collection work that was performed immediately following the incident was captured on a hand sketched map that was never converted into a properly scaled map with any sort of measurements, hardly suitable for a homicide investigation.”

Nelson Torre, the attorney for the family, took issue with the BPD’s handling of evidence when the AG report was released. “What’s noteworthy is this diagram that was compiled by the BPD in September is different than the one that was made at the time, which shows the position of police car 164 after the fatal shooting took place,” he explained at a press conference in December. “As one can note, the police car has been moved. The AG’s office confirmed it was moved after the fatal police shooting and that there was no reconstruction of this collision done to determine how the impact happened,” Torre said, pointing to printed out media pictures of Hernandez Rossy’s vehicle and the police vehicle in question.

“Another troubling aspect which is contained within the AG’s investigation is that over the course of an 8-month investigation the officer that moved the police car involved in the case after the fatal shooting has never stepped forward to say why he moved it and where he moved it from,” Torre said. “There is litigation pending, there will be a great deal further investigation in the case. All of this being done with a view towards arriving at the truth of what happened in a full and complete fashion.”

Susan LoTempio’s death is also being investigated by the OAG under the same law that triggered investigations for Davis and Hernandez Rossy. Buffalo Police, however, enlisted the help of State Police to assist with their accident reconstruction for the LoTempio accident, shutting down Hertel Avenue for most of the morning.

Buffalo Police has not responded to our requests for clarification on the matter.

In the OAG report on Hernandez Rossy, a section titled “Policy Recommendations” includes a lengthy admonition—as did a previous OAG report on the death of another unarmed civilian, Wardel Davis, who died in a police beating and choking incident—that the BPD become accredited.

The Buffalo Police Department has been faulted by advocates and by the state Attorney General’s office for lacking state accreditation, a process that better ensures that best practices and trainings are up to date and standardized across departments. According to online resources that advertise accident reconstruction for law enforcement, accident reconstructions are specialized investigations that demand specialized training. The BPD has claimed it has started taking steps toward becoming accredited.