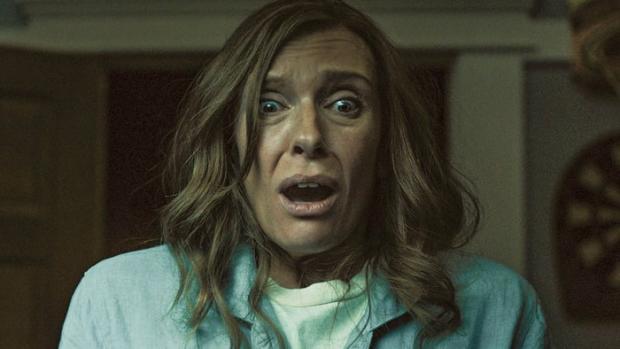 Three new films whose endings force you to reconsider everything that came before them mean a tougher than usual challenge for me to avoid spoilers. I will do my best.

A hit at Sundance, Hereditary is a horror film about a family having trouble dealing with grief. Toni Collete gives what may be the best performance of her career as Annie, wife of Steve (Gabriel Byrne) and mother of teens Peter (Alex Wolff) and Charlie (Milly Shapiro, who starred in Matilda on Broadway). The movie opens with the funeral of Annie’s mother, whom she damns with faint praise in a eulogy to more people than she expected to show up for the event. To say that she had problems with her mother is an understatement. But you’re not supposed to speak ill of the dead, so Annie represses her feelings and puts her energies into helping her children cope.

A more direct grief takes hold as the result of a horrifying accident, one that brings out all kinds of ugly cracks in the family’s façade.

Hereditary is the first feature from writer-director Ari Aster, clearly a fan of the domestic horror films of the late 1960s and early 70s: there are echoes (though seldom direct references) to movies like Rosemary’s Baby, Don’t Look Now, The Omen, and The Exorcist, as well as The Wicker Man. The film is long, a bit over two hours, but never drags: even its slowest scenes maintain a steadily ratcheting of tension.

The problem, at least for me, is that Aster is a better director than he is a writer. Most of what seemed to be ambiguous and mysterious about the movie is revealed to be misdirection in a finale that is not only unpleasant (okay, it is a horror movie) but also unsatisfying and at least a bit ludicrous. Like A Quiet Place, Hereditary is undeniably scary and unusually well-crafted, but eventually less than the sum of its parts.

One wonders if it was a consideration of the staggering amounts of sexual information available on the internet these days any child who wants it that led Ian McEwan to write his 2007 novella On Chesil Beach, about a young British couple who marry in 1962 with little knowledge about sex. Worse, the oh-so-British repression of their upbringings means that they have no way to communicate about it: Both virgins, they can barely even formulate their feelings to themselves, much less each other.

McEwan, most of whose work has been adapted to film, wrote the screenplay for the new movie of On Chesil Beach, which stars Saoirse Ronan and Billy Howle as Florence and Edward. She is a budding classical musician, he is a student who wants to write about history. They are of different classes, but that’s a hurdle they are able to overcome. The bulk of the film, which opens on their wedding day, consists of flashbacks tracing their relationship, which is sweetly appealing.

That this likeable young couple won’t be able to get past their problem will not come as a surprise to fans of McEwan, though the way that he and director Dominic Cooke present it evokes our empathy. What comes close to ruining the film are two postscripts presented years after their wedding. What was rueful in McEwan’s book becomes unnecessarily, even cruelly sad. My advice: see the film, but head for the doors the moment “1975” flashes on the screen.

Adrift is an adaptation of the memoir by Tami Oldham, who in 1983 set sail with her fiancé Richard Sharp on a luxury yacht they had been hired to take from Tahiti to San Diego. Nice work if you can get it, as long as the weather is nice. No such luck: They ran afoul of an unexpected category-four hurricane that ruined the boat’s engines and threw it hundreds of miles off course.

The story was adapted as a vehicle for Shailene Woodley, star of the Divergent films, which is to say targeted to young women. Under the questionable assumption that said audience won’t buy tickets for anything that isn’t slathered in romance, the scripters tweaked Oldham’s story to play up the role of Sharp (played by the suitably hunky Sam Claflin). That was a bad decision because it has the effect of minimizing Oldham’s accomplishment in her own survival. The way the story plays out is not inaccurate, but it is (as eventually becomes clear) misleading, and hampers the effect you would think a story like this would most want to provide.