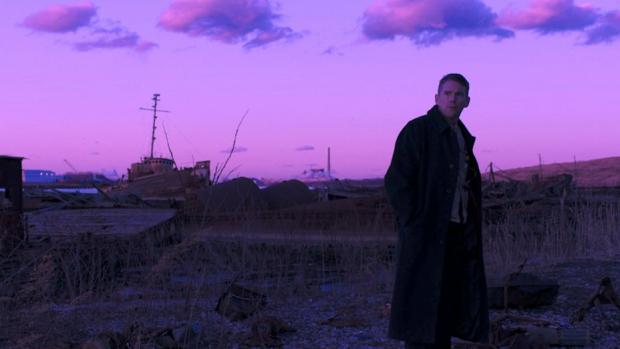 It may seem inappropriate to call a movie as bleakly and deeply serious as Paul Schrader’s First Reformed silly, but before it’s over the temptation to do that can intensify. At least, it did for me. Schrader’s picture seems very personal, carefully and even painfully achieved for much of its length. Yet, at about the two-thirds point, First Reformed begins to go off its rails before it flames out in radical, summary excess.

The title refers to the Dutch Reformed church in Sturbridge, New York, near Albany, where Reverend Toller (Ethan Hawke) serves the few remaining souls in his dwindled congregation. The church was founded in 1767, and it’s become little more than what Pastor Jeffers (Cedric Kyles, aka Cedric the Entertainer) calls “a museum church.” Indeed, Toller conducts and dignifiedly tries to hawk souvenirs to a very few visiting tourists.

Jeffers presides over a nearby suburban, 5000-member megachurch and is apparently Toller’s employer, as well as a kind of mentor, the large-scale church having somehow acquired ownership of Toller’s. (Schrader’s script is a little vague about such formalities.) Jeffers has become concerned about the younger man’s mental and physical state. Toller appears thin and strained; he has become reclusive, and is suspected of being a secret drinker, a valid surmise. He’s also secretly in periodic pain. We are clued into Toller’s troubled, tortured mindset via Hawke’s narration from a journal Toller has begun to keep.

If any of this strikes you as reminiscent of Robert Bresson’s Diary of a Country Priest (1950), that’s because Bresson is a known influence on Schrader and the similarities are scarcely coincidental. First Reformed is about severely challenged faith, conscience, and practical engagement with a dangerous world. It’s in this last idea that Schrader has departed from Bresson.

When Mary (Amanda Seyfried), a pregnant member of his small congregation, asks Toller to speak to her vexed husband, Michael (Phillip Ettinger), Toller begins to consider increasingly drastic, frightening ideas. Michael has despaired over the country’s rapidly degrading ecological and political condition, and doesn’t want to bring a child into the world. Toller responds with a sophisticated but sympathetic combination of reason, belief, and inspiration, quoting one of Thomas Merton’s Christian-existential precepts. This scene is impressively written, even though it’s hardly cinematic.

Toller will fail, however, and soon enough, the movie begins to be overwrought and off-kilter. (In one scene, Schrader subjects us to a spectacle of absurd, phantasmagoric ecological ecstasy.) Eventually he provides a last-ditch resolution that’s at once melodramatic, sentimental and grotesque.

Before these untoward events, the director arguably indulges in too much severe stylization. His color schemes often tend to beige and dun coloring and Toller’s apartment resembles a monk’s cell in its stark bareness, as the clergyman’s footsteps echo in bleak loneliness. But his movie really goes off badly and Schrader loses it near the close.

First Reformed is unmistakably a personal and deeply felt project. But Schrader must have hit a dead end, or become snarled in his own feelings and questions.