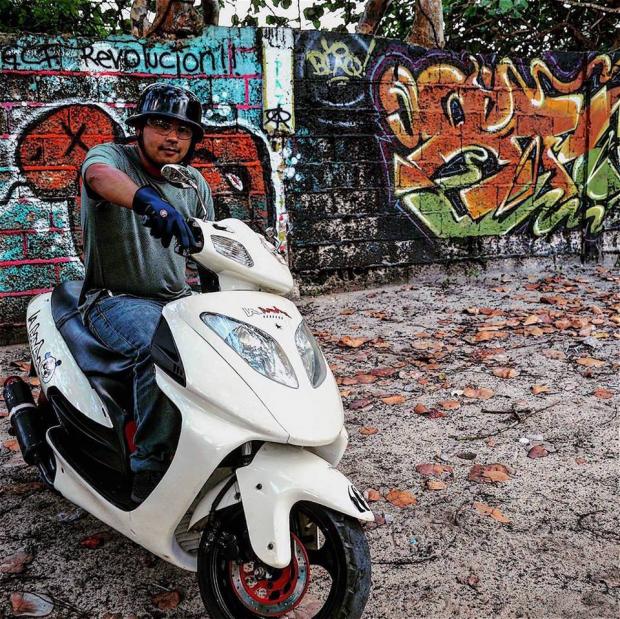 Among the more impressive teachers’ works, Ellie Byrne’s acrylics on canvas paean to paint, in vivid colors in open buckets, called The Process. And Kayla Leach’s bold metaphor self-portrait as a chrysanthemum, in myriad hues from the red end of the spectrum. And Rona Goldberger-Hecker’s watercolors and pastels weave construction of sliced strips of multiple previous paintings—of various organic subject matters—trees, foliage, sky, edible and inedible vegetation, a face of fish—as a much fragmented but yet still legible portrait of a kind of earth goddess. Demeter, perhaps. Somewhat in the manner of Renaissance Italian artist Giuseppe Arcimboldo, who made human-like portraits composed of fruits and vegetables and flowers, but more artistically interesting—the Goldberger-Hecker piece—inasmuch as less bizarre, and more artful in the amalgam technique. How the fragmented image elements are juxtaposed and fitted and blended together.

Art and travel come together also in two photos by Michele Agosto. Character studies in both cases, one called El Guardián—who may or may not be on guard, but probably best presume so—the other called Revolución—of a young man who may or may not be a revolutionary, on a white motorbike and posed before a brick wall heavily spray paint graffitied with a revolutionary message. The locale in both cases—for a guess—might be Cuba.

Laura Minor has several understated environmental pieces, called Bodies of Water in NYS with Toxic Algae Blooms in 2017. What at first look like random nondescript shapes—in colors and color patterns that could probably best be described as oil slick—that after some looking, you decide must be configurations of actual New York State lakes, choked with algae.

And Eric Evinczik two daub impressionism paintings featuring dinosaurs, gremlins—or maybe those are trolls, with Spock ears—and what would have been very early humanoids. One called The Wild Ride—humanoids and one of the gremlins, or trolls, on the back of an obliging Tyrannosaurus Rex—and one called Trolls’ Parliament—a kind of remote prehistoric town meeting.

One wall of the Jump Start exhibit is devoted to work related to a project by adult artist Mark Snyder and a score or so of Jump Start students tasked to create an outdoor artwork for the NFTA’s Black Rock/Riverside transit hub. A three-sided sculpture incorporating steel etching versions of photos the students took of architecture and other subject matter in the course of photographic expeditions through the historic northwest Buffalo area. A dozen or so of the original photos are on display, and an example of a photo-etched stainless steel plate as produced for the project.

Other students’ works range in genre from selfie drawings to figure studies of live models, and in artistic proficiency from neophyte artist first beginnings to accomplished visuals and ceramics by program participants such as Naomi Hata—some lovely abstract mixed media works, and an inchoate portrait group in inky black and gray on cloth—and Joshua Flores—a comical drawing/painting about the evolution of voice communication technology, from tin can on a string to cell phone, and in another section of the exhibit, some superb small ceramic items.

Among Jump Start alumni/alumnae works, a compilation of brief but excellent animation videos by Molly Lonigan, Rachel Struble, and Buyinza Buchanan. All three young artists apparently well on their way to promising careers in the animation field.