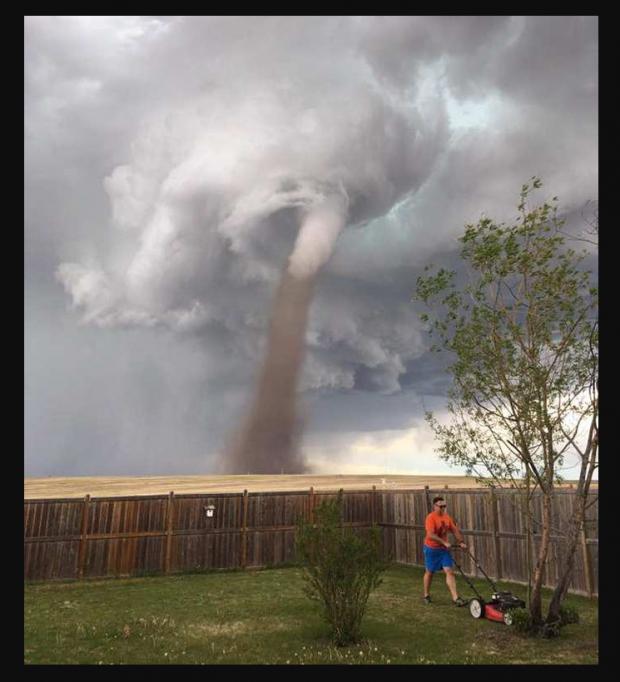 Ever get that feeling that everything is normal? It is not. Photo by Cecillia Wessels of her husband Theunis Wessels -last week in Three Hills, Alberta, Canada. (Now known as "Two Hills")

We are probably right to be concerned about the Trumps mental health.  And, he is surrounded by a sinister bunch  that may have aspirations way beyond the destabilization of western democracy, democratic economies, and the rights of people and the planet. There is nothing normal about any of this.

But we digress.  The future of America is still there, in the future. The fights of July and August are still to come. Climate change is now. It will not become yesterdays news and only the problem of future generations. It is in our hands now.  We cannot rely on the whims of insomniac illusionists and the hidden hands of the dissembling message makers. We must open our eyes or the eyes of our children will close forever.

-The science of climate change is conclusive, not speculative.

-The impact of fossil fuels on the climate and on the economy is disastrous.

-These greenhouse gasses released by the burning of coal, oil, and natural gas include both -carbon and methane.

-The changes to the atmosphere are destabilizing life on the planet including yours and mine.

We wont spend any time here today making the argument but here are a few links if you need to upgrade your survival skills.

NASA Climate Change: How do we Know? https://climate.nasa.gov/evidence/

It is hard to know if there really will be any good jobs for anyone in what is shaping up as our future because of things like automation and changing economic development models that champion hedge-funds, real-estate scams, and insider trading deals that create a minimal worker class of servants but-

Cimate change deniers Trump and his Trumpaholic sympathizers including US Secretary of Commerce and comic book character Wilber Ross, are pontificating that generations of coal miners and their families long for the good old days of toiling in deep, dangerous, unregulated mines. We are pretty sure this is a trumped up vision that will not make America great again.

Wilbur Ross mouths a lot of dystopian claims of lost jobs, transfer of wealth to China, and how pulling out of the Paris agreement will help the American economy.  What in hell is the BERA Group Ross references in this interview?  Cannot find any references to this anywhere? Can you?

Many argue that manufacturing related to clean energy production will create a net gain of hundreds of thousands of good new jobs in that sector and will vastly improve the economy.

Elon Musk who has staked at least a part of his empire in Western New York, Solar City, and clean energy marketing and manufacturing apparently does not agree with Wilbur Ross and the empire. He has as of this week, quit two Trump appointed business advisory council’s.

The bottom line is if you live in Trumps Appalachia, you might not want your children and grandchildren to face a future of continued poverty, black lung disease, and an unregulated mining industry that does not value your life as much as you do.

And, there may be other profound economic strategies for the Appalachian region, and for the USA. In the face of the Republican parties headlong rush to destroy America, some of these may be worth looking at.  For instance, some are looking at the future of Appalachia as more of a high tech corridor. Good jobs of a Silicon Valley nature.

A Silicon valley Lawmaker’s Plan to Save Trump Country/Wired

Remembering the Big Branch Mine Disaster

In 2010 the Massey Energy owned Big Branch Mine in Raleigh County West Virginia was the site of an explosion and collapse which resulted in the deaths of 29 miners.

Massey Energy and its CEO Don Blankenship were found guilty of conspiring to willfully violate safety standards. Blankenship, a long time Republican Party investor and strong advocate against safety regulations was released on May 10 from an Arizona Halfway House after serving a prison term at the private Taft Correctional Facility (TCI) in California.

Full Report on the Big Branch Mine Disaster

In Memory of The Men of the Big Branch Mine

If you have ever read GreenWatch you know that we have had a laser focus on the context and costs of “externalities”.  Our economic system in itself is a pact with death, genocide and intended obsolescence. Externalities are costs that are not measured as a part of the profit taking in the private sector. Externalities are paid for by you and I with our tax dollars, our health, and our quality of life. Externalities include pollution, and very often social instability.

This is a link to a Union of Concerned Scientists overview of external costs born by all of us that are associated with fossil fuels.

Here is our favorite short video about externalities, which links the concept of externalities and conventional economics  to planetary brain damage wholly created by anthropogenic economic strategies.

New York State Assemblyman Sean Ryan  has this week introduced legislation designed to “prevent and combat lead exposure and poisoning”. Buffalo, Erie County, and other parts of New York State have disastrous levels of lead exposure which damages brains and development of people, especially children. Ryan spoke at a West Side News Conference on Thursday and was joined by Erie County Executive Poloncarz.

Ryans legislation would Ryan said at the news conference “A recent investigation by Reuters identified four zip codes in the city of Buffalo where 40 percent of children have been exposed to lead. this is eight times higher than the rate found in Flint, Michigan during the recent water crisis.”