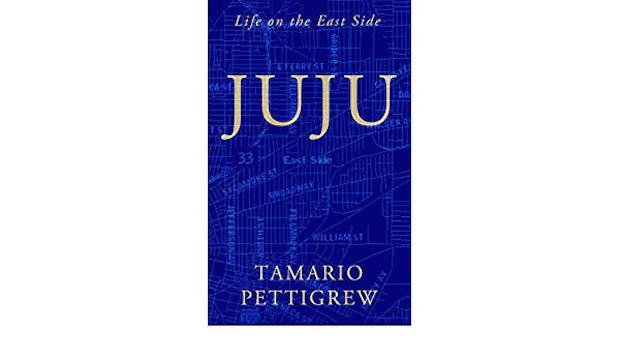 The considerable action of Juju, a first novel by author Tamario Pettigrew, unfolds in a section of the City of Buffalo most Buffalonians know little about. By choice. The East Side territory just west of Fillmore Avenue—toward downtown—particularly between Broadway and Sycamore. Juju, the protagonist, calls it “the ghetto.”

Including a near total absence of positive role models. No actual father figure in the picture, but rather a series of nominal stepfathers whose interactions with the protagonist range from something like malign neglect to physical violence. The nuclear family—excluding the nominal stepfathers—comprises a mother working multiple low-paying jobs to keep food on the table—not always successfully—for Juju and several younger sisters, only one of whom, Boo, we get much sense of. A semi-invalid, afflicted with sickle cell disease, but a reader, who encourages Juju to read. Catcher in the Rye, To Kill a Mockingbird. And write.

Two older brothers aren’t much around, between bouts of incarceration and preoccupation elsewhere in a variety of criminal activities, selling and in the crack period making and selling drugs.

Juju doesn’t want to be a criminal—he wants to be a writer—you can’t help getting a sense of thinly disguised autobiography throughout—but criminal is the most likely profession the ghetto environment holds out for him, from an early age apprenticing him into petty criminal activities.

It’s complicated. The first rule in the ghetto is to survive. First rule anywhere, but the ghetto underscores it. You have to work extra hard at survival. And in a group, because there’s strength in numbers. But friends who will have your back, as you will have theirs.

But admission to the group—or gang if you like—requires demonstration of certain qualities. Like personal toughness, and bravery—even reckless bravery—and adherence and commitment to group values. That tend to be outlaw values. So demonstrated via outlaw group activities. Like—initially—stealing penny candy—in quantity, it sounds like—from stands at the Broadway market. Later there’s an incident of stealing bikes left by their owners for the moment outside a pizza parlor, and ensuing breakneck ride through the ghetto backstreets to avoid being spotted by cops. He gets his bike home, but his mother knows it’s not really his and won’t let him keep it, and he and his companion thieves end up unloading their stolen bikes at a junkyard for a few bucks each.

All of which could get you—from early on—on the wrong side of the legal system. This eventually happens in Juju’s case. But the larger point is that it isn’t necessary to engage in criminality to get on the wrong side of the law. Not if you’re a black guy from the ghetto. There’s a predisposition on the part of authorities—cops and even schoolteachers—to see you and treat you as a thug.

Cops don’t fare well in the narrative. Whose basic mode of interaction with ghetto black kids is intimidation. As first-person narrator Juju explains:

Cops don’t understand they make you want to run, even if you innocent…They make you fear them…That how it is to be a black boy with the cops. They beat you up and then say, “I ain’t gon’ beat you up.” They beat you when you on the ground and holler, “Stop resisting” in their radio, so they’ll have a record to say they beat you because you was resisting, even if you wasn’t. They say, “Tell me the truth and I ain’t gon’ lock you up,” then they lock you up for telling the truth.

Then if white people looking, they treat you real nice and call you sir so white people can keep believing the cops some good people out to “protect and serve.” Well they not. When they enter the ghetto, they ain’t nice for shit.

In addition to the egregious criminality of the cops themselves, particularly in the crack period, when, as Juju relates:

the ghetto was on fire with dealers and smokers doing crazy shit for crack money. The ghetto ain’t the same no more…Every black boy I knew was a crack dealer now…

The cops profit from the crack epidemic as much as or more than the dealers and suppliers. The basic mode of interaction changes from intimidation to extortion. Horror stories about the cops. Like the time they rode Juju’s friend—and crack dealer—Ashley around in the trunk of a squad car for the better part of a day—hitting every pothole they could find—and then when that didn’t persuade him, put him in the back seat and played him as an informer on other crack dealers—which would have gotten him murdered pronto—before he agreed to hand over a shoebox full of cash illicit earnings, which was what they wanted from him in the first place. They don’t even arrest him.

But much the same with teachers (not in terms of criminality, but attitude). As he puts it:

Teachers in the ghetto schools are the same as police officers. They be acting like they supposed to corral you, like they supposed to keep you in yo place. Like you a wild animal when you ain’t…Then they get all nice when yo mama come to school. That’s what my teachers did to me. If they woulda just acted like I was alive and normal, I woulda probably been they best student. But I ain’t like them and they ain’t like me.

It’s a book not without flaws. Some overbroad generalizing and shallow analysis and dubious self-assessment, a little reminiscent of Holden Caulfield.

But far outweighing the flaws, it’s a powerful book, based on the palpable authenticity of the situations and incidents described. As well as a powerful story of survival. That Juju survives. Against all odds, as it were. Becomes a writer.