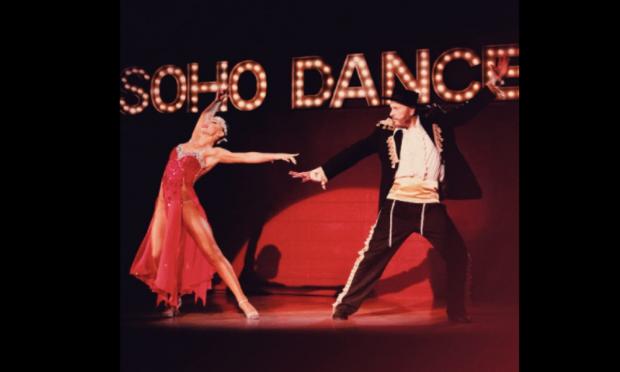 America’s long-cherished status as a cultural melting pot is at the center of Tango Shalom, a likeable comedy whose message about religious tolerance more than makes up for its occasional failings.

Jos Laniado stars as Moshe Yehuda, a Hasidic Rabbi in Crown Heights, Brooklyn. The school where he teaches is on the verge of closing unless he can come up with a big cash infusion.

After exhausting every possibility, Moshe regards it as a miracle when an opportunity to earn a lot of money falls in his lap, though it’s the kind of miracle that may tax him to his wits’ end: local dance instructor Viviana (Karina Smirnoff, a regular on Dancing with the Stars), has been preparing for a big tango competition, only to have her partner abandon her for another dancer. A chance meeting with Moshe shows that they have chemistry as dancers, enough that she feels they can enter the contest.

That Moshe is more accustomed to dancing the Hora is the least of his concerns. As a Hasidim, he is forbidden to touch any woman other than his wife—and the tango is a dance that involves a lot of touching.

How Moshe resolves this (and this isn’t the kind of movie where there is ever any doubt about the ending) is clever and inventive. The path he takes requires him not only to navigate the doubts of his own family and congregation, but to seek the advice of other religious leaders in his area, including a Catholic priest, a Muslim imam, and a Sikh holy man.

Tango Shalom is largely the product of two families who bring their own ethnic and religious histories to the project. It was written by star Jos Laniado and his brother Claudio, Egyptian-born Jews whose family emigrated to America by way of Argentina, where they developed their love for the tango. It was brought to the screen with the involvement of director Gabriel Bologna, who brought to the project his father the late character actor Joseph Bologna (who helped write the script and plays the priest Father Anthony), his mother Renee Taylor and family friend Lainie Kazan, who play feuding Jewish mothers, and his wife Zizi Bologna to compose to lively score. Too many cooks may not always spoil a broth, but they can overload it with ingredients. At 115 minutes, Tango Shalom is rather longer than it needs to be. Still, if the story drags it’s hard to complain about any given scene or characterization, most all of which are lovely enough that you can’t blame the editors for being unable to take their digital scissors to them. Fans of My Big Fat Greek Wedding will be the best audience for this, but save it for a leisurely night.