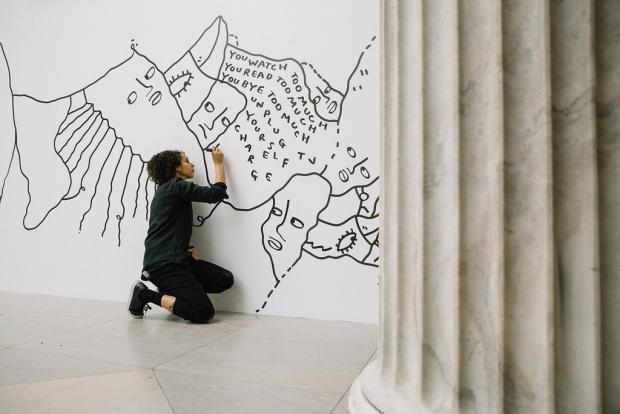 Shantell Martin, the London-born artist whose solo exhibition Someday We Can has been charming visitors to the Albright-Knox Art Gallery since it opened in February, returns to Buffalo to create a permanent mural at 537 East Delavan Avenue in Buffalo’s East Side. The public is encouraged to stop by and watch Martin work June 3-7 (weather permitting). This will be the culmination of her multi-part artist residency that was made possible through the collaboration of UB’s Creative Arts Initiative and the AK’s Public Arts Initiative.

Shantell Martin draws. Compulsively. Spontaneously. On everything: walls, found objects, napkins at dinner, her friend’s car, even her fans. Martin rejects categories such as “fine art” versus “commercial art” and refuses to be “put in a box.” She prefers to categorize projects as a good fit or not, and accepts or rejects commissions accordingly.

One reason a project would not be a good fit is if a description of what she will draw is required. Martin says that she never knows what she will draw before she starts. She just follows where her pen leads. Martin’s openness about her process is disarming. She says that anyone can draw and encourages others to allow themselves to do so. She insists that she can only draw stick figures. She will admit that she has “gotten pretty good at making a line look like me.”

Martin usually draws black lines on white surfaces, but occasionally she will reverse that. She also wears black and white almost exclusively. Her work is a fantasia of whimsical characters, landscapes, faces, and words.

Martin has been drawing since she was a girl growing up in a working-class public housing complex in London. In speaking to audiences at UB and the Albright Knox, Martin described a childhood that did not encourage artistic achievement. Martin says that her decision to apply to art school was in part a response to an art teacher who told her it would be a waste of time and she wouldn’t be accepted. Having proved her teacher wrong, Martin found that art schools do not teach young artists how to be business people. She has had to find her own way.

Martin honed her drawing skills though “liveography”—a process of drawing to sound, music, or other experiences and projecting the work for the audience in real time. She was in demand in Japan’s club scene, where digital artists often project work on screens to accompany the music. Martin’s technique was interactive, responding to the energy of the crowd in the moment. She still enjoys drawing live for an audience.

When Martin moved to New York she had to reinvent herself. She tried traditional approaches, but was caught in a situation familiar to everyone—you need experience to get a job and a job to get experience. So she decided to make her own opportunities. Martin got permission to draw on a friend’s car, and soon she had an audience. She has been making waves in the New York art scene since at least 2011, when French Glamour declared her New York’s “coolest it girl.”

Martin’s residency in Buffalo represents the first time an artist has been exhibited in the Albright-Knox Art Gallery while simultaneously creating work for the AK’s Public Art Initiative. This juxtaposition is intended to make a statement that art belongs in neighborhoods as well as in museums. The Public Art Initiative is an innovative partnership between the Albright-Knox and Erie County established in 2013. The City of Buffalo joined the partnership in 2014. The goal of the Initiative is to create spaces of dialogue where diverse communities have the ability to engage socially, actively respond, and cooperatively produce great public art that is capable of empowering individuals, creating stronger neighborhoods, and establishing Western New York as a critical cultural center.

Martin’s residency was made possible by funding from the University at Buffalo’s Creative Arts Initiative. Directed by David Felder (SUNY Distinguished Professor and Birge-Cary Professor in Music Composition) and Bruce Jackson (SUNY Distinguished Professor and James Agee Professor of American Culture) the Creative Arts Initiative is a university-wide initiative dedicated to the creation and production of new work upholding the highest artistic standards of excellence and fostering a complementary atmosphere of creative investigation and engagement among students, faculty, visiting artists, and the community.

The creation of the mural at 537 East Delavan Avenue is an opportunity to see Shantell Martin at work, to witness the creation of a piece that will enhance the neighborhood for years to come.

Martin’s exhibition, Someday We Can, will be at the Albright-Knox Art Gallery until June 25, 2017. Admission is FREE on June 2 as part of M&T First Fridays at the Gallery.