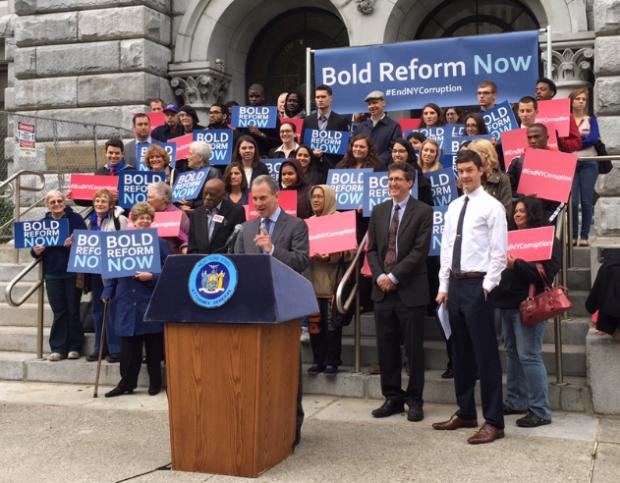 Last week, in my story about Attorney General Schneiderman’s push for an ethics reform bill in Albany, I alluded to local state Senator Mike Ranzenhofer’s involvement, but it bears its own post.

One of Schneiderman’s proposed reforms would close what’s called the “LLC loophole”. This legal quirk enables politicians to raise massive sums of campaign cash that is difficult, if not impossible, to trace. For donors, it’s an easy way to (a) donate cash without leaving easily identifiable fingerprints; and/or (b) completely bypass and ignore the mandatory maximum donation. It costs just $200 to file and create an LLC, and each LLC can donate as a separate individual. One New York City developer has used the LLC loophole to pour over $13 million into campaign coffers since 2000.

Fixing this loophole is simple—in fact, Brooklyn Democrat Dan Squadron proposed a bill to do just that, but it was upstate Republicans in the Senate who effectively killed the effort, including the chair of the Corporations Committee Mike Ranzenhofer (R-East Amherst).

On Monday, the Buffalo News’ Denise Jewell Gee wrote that there are only 17 days to call your legislators to get the LLC loophole closed, but she omitted the local connection.

Not only did Ranzenhofer shut down Squadron’s bill to close the LLC loophole, but Ranzenhofer got $94,000 from Glenwood, the company whose various and sundry LLCs, led by Leonard Litwin, have contributed $1,000,000 to Governor Cuomo using 19 individual LLCs. Litwin and Glenwood are linked to the Sheldon Silver criminal probe, as well. It was reported yesterday that the Cuomo Administration cited an ongoing federal probe into the state’s housing finance agency relating to loans made to Litwin’s company. It is as if all of Albany is under investigation, or cooperating with an ongoing one.

Rural and suburban Democrats, naturally, have a difficult time recruiting candidates to run against Ranzenhofer to begin with, but who would want to bother when Ranzenhofer can pull in that much money from just one allegedly corrupt company, and shuts down any effort to close the LLC loophole as part of his official duties? Why is Ranzenhofer getting a pass from local media on his connection to Litwin and Glenwood, and his blatant blocking of Squadron’s effort to eliminate the corrupt/ing LLC loophole? Here it is:

It becomes more and more obvious that public financing of elections is the only way to clean up this state.

Albany corruption is a bipartisan problem with easy solutions that are being blocked in an equally bipartisan manner. Ranzenhofer has been moistening legislative seats for 20+ years, accumulating state benefits and pensions without accomplishing much of anything. The fact that he’s actively blocking even the most basic and uncontroversial Albany reforms should lead to his removal from elected office. Reform or get out of the way.