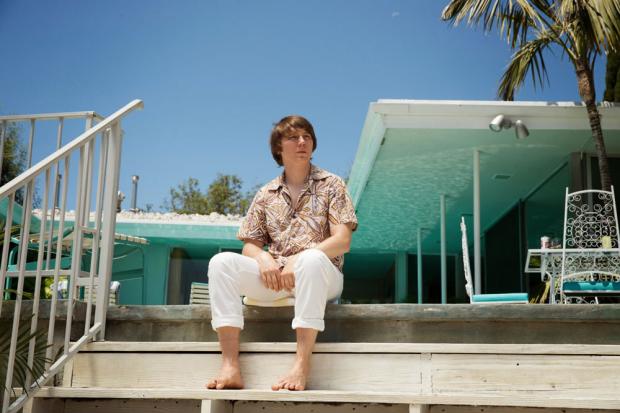 Two biographies of geniuses who flourished in the heady days of the 1960s, a musician and a fashion designer, make for fully satisfying films opening at local theaters this week.

Love & Mercy is the story of Brian Wilson, the composer of some of the most sublime music ever to come out of a transistor radio. “Composer” doesn’t quite capture his talents: Like his contemporaries the Beatles on the other side of the world, he found new uses for the recording studio in creating intricate pastries of sound.

As a young man, played by Paul Dano, we first see Wilson agonizing over incessant touring with the Beach Boys, the band he formed with his brothers and cousin. He begs off a tour of Japan so he can stay at home and take time to capture the intricate sounds he hears in his head. The musical world is agog over the Beatles’ Rubber Soul and its revolutionary recording advances. Wilson wants to go them one better.

A sizeable amount of the film is spent watching him at work, with the studio musicians who later came to be lionized as “the Wrecking Crew,” perfecting the precise sounds he wants, for the album Pet Sounds. I would happily have watched an entire movie of this recreation, seeing the details of how songs like “God Only Knows” and “Caroline No” were assembled. (It’s the same delight in process that made an entirely different music film, Hustle & Flow, so absorbing.)

These scenes are intercut with Wilson two decades later, an insecure middle-aged wreck played by John Cusack. Control of his life has been given over to Dr. Eugene Landy (Paul Giamatti), a celebrity-chasing psychotherapist who practices a 24-hour-a-day therapy, micromanaging the lives of his patients. That he brought Wilson out of a seemingly bottomless spiral in the 1970s was enough for the family to give him guardianship rights over the musician, who is too mentally fragile to protest. But after years of this treatment, involving substantial amounts of prescription drugs, it seems the cure is no better than the illness. It falls to Melinda Ledbetter (Elizabeth Banks), who will eventually become Wilson’s second wife, to pull him away from his manipulative savior.

The story of Wilson’s journey through mental illness, exacerbated at first by street drugs in the 1960s and 1970s and overmedication from Landy, is a long and complicated one, dealing with involved family and legal issues. It’s inevitable that a movie will have to simplify it somewhat. But Love & Mercy captures the battered soul of the man, wounded first by an abusive father and later by the father figure he puts in his place. The two performances are equally strong, though Dano benefits from looking more like the real Wilson than does Cusack, who barely resembles Wilson in any way other than height.

Mapping the rise and fall of an artist is standard structure for this kind of biopic, usually followed by an audience-pleasing revival. Saint Laurent follows a slower decline in the career of Yves Saint Laurent, the fashion designer who both revived international haute couture in the 1960s and elevated the business of ready-to-wear clothing.

Dispensing with the usual rise-to-fame stuff (as does Love & Mercy), we meet Saint Laurent (Gaspard Ulliel) in 1967, at the height of his early fame. Again, the film is leisurely at observing process: the seamstresses who labor to construct new designs, starting from scratch to suit his whims; a lengthy business meeting in which we learn some of the complexities of international marketing (as well as the difficulties of that task when everyone at the table doesn’t speak the same language). Even Saint Laurent’s Warholian nights in clubs and discos are treated this way, as if observing the milieu for which he designs were just another part of his job.

If you’re like me, high fashion may not strike you as interesting artistic endeavor. I admit to being an ignoramus on all matters sartorial, and I trudged to the screening with no great anticipation. But director Bertrand Bonello, who has yet to have an international success despite 15 years of distinctive filmmaking in France (he was recently the subject of a retrospective at the Film Society of Lincoln Center), overrides that particular to weave a languorous but transfixing portrait of artistic life and the decadence that often comes with it. In the decade through which we follow him, Saint Laurent falls into the usual pattern of drink and drugs for inspiration and relaxation. But the world he brings us into is as fascinating as anything in Visconti (a comparison Bonello may be courting with the casting of Helmut Berger as the aged Saint Laurent). At two and one-half hours it’s a long film, probably too long. Yet when we come to the films climax, a 1976 fashion show edited in a multiframe grid that echoes the Mondrian paintings the designer collected, featuring elaborate, impractical dresses that seem designed only for this fleeting moment, the movie justifies itself.

If you were a fan of the HBO series Entourage, you’re probably already planning to see the movie sequel. Or at the very least you don’t need me to help you make up your mind. But if you’re like me and never saw the series, you may be wondering if it’s worth seeing or if you’ll be hopelessly lost. (That’s the case with most recent movie sequels: If you haven’t seen the predecessor, the new one does nothing to bring you up to speed.)

I can tell you that the movie of Entourage provides you with everything you need to know about the setup, which is pretty simple: the adventures in La-La Land of a movie star (Adrian Grenier), the three besties he brought with him from Queens to handle his needs (Kevin Dillon, Jerry Ferrara, and Kevin Connolly, who somehow gets top billing—guess they flipped a coin), and his deal-making agent (Jeremy Piven).

But I suspect that you would have to be a fan of the show and therefore invested in the characters to care about any of this. The plot—movie star Vince decides he wants to direct and gets the chance now that agent Ari is in charge of a studio—would be adequate on a sitcom where the plot is mostly there as a skeleton for the jokes and recurring character bits. (I don’t know how many episodes of the show you had to watch before Kevin Dillon stopped being excruciatingly annoying, and I don’t plan to find out). As a feature, though, it’s pretty thin stuff, with a sense of humor and attitude toward women that seems directed at audiences well shy of the legal drinking age.

If you get dragged to see it by one of the show’s devotees, you can at least amuse yourself by trying to identify the endless stream of C, D, and Z-list celebrity cameos. A few are funny: Kelsey Grammer, Liam Neeson. But you know they’re scraping the bottom of the barrel with Andrew Dice Clay, and it limbos even lower: you can argue among yourselves afterward whether the true bottom was reached with David Spade, David Faustino, or Chad Lowe.