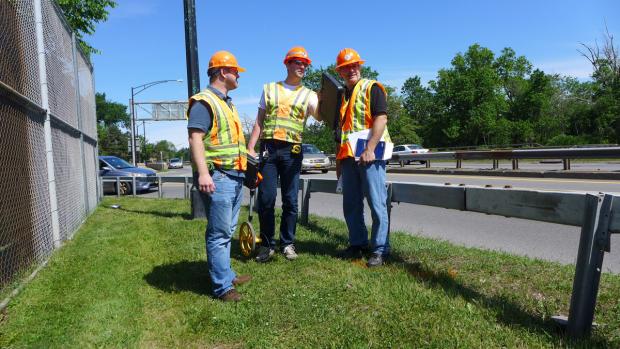 In reflective safety vests and bright orange helmets, a trio of Department of Transportation employees walked along Route 198/Scajaquada Expressway in Buffalo on June 2 along the shoulder of the roadway, working. John Wentz, Brian Dankert, and Norman Scherer were out “Collecting data so that they can decide what to do,” Scherer says, regarding replacement or enhancement of guardrails along the route following the tragic and fatal crash in Delaware Park (adjacent to Route 198, in part) on Saturday, May 30. The guys from NYSDOT were toting a distance wheel, measuring tape, and spraypaint, saying “If we find anything we’ll mark it.” Following the accident on Saturday, temporary concrete barriers were installed in areas where the roadway curves closest to the park. On May 31 the speed limit was lowered to 30 m.p.h. from 50 m.p.h. along the 3.5-mile-long 198. The Public reached out to local DOT Public Information Officer Susan S. Surdej (who handles all media inquiries) for a comment before this past publication deadline but calls were not returned in time. Following is an update from Surdej, received on June 3: “The City installed temporary concrete barriers, with the assistance of DOT, on Monday (June 1). DOT had underground utilities marked out on Monday in preparation for the installatin of interim guide rails which will be installed today. It is anticipated that guide rail installation will be completed by June 10. Permanent guide rails, more aesthetic with the park, are being designed.”