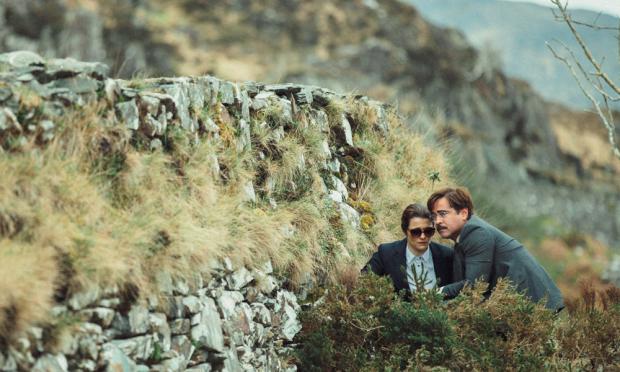 To the extent that movies are largely consumed by couples on dates, The Lobster would have to rate as a spectacularly misconceived product: a movie satirizing the notion that people should enter into relationships with each other. On the other hand, if you are single and feeling oppressed in a world of happy couples (or couples ostentatiously pretending to be happy), this absurdly hilarious movie is for you: it’s less a rom-com than a rom-bomb.

Colin Farrell stars as David, an architect whose wife has recently left him. No problem so far: Many a romantic comedy starts out following a sullen dumpee.

But David lives in a world where the rules are somewhat different from ours. It’s a world where people are required to be part of a couple. By law. Like others in his situation, David has 45 days to re-enlist in the army of the attached. If not, he will be turned into an animal.

Of course, the folk enforcing this aren’t completely barbaric: You get to choose the animal you will be. Most people elect to become dogs, as did David’s brother, who remains his companion.

The newly separated are hustled off to a hotel to find partners. It’s not exactly a low-pressure situation. For one thing, the alarm clocks wake you up with an announcement of how many days you have left. Dazzling the opposite sex with your wardrobe and bling is not an option: everyone has to wear the same outfits. A dance in which all of the women wear the same floral print dress is one of the many absurd sight gags that provoked me to a fit of giggling. I’m giggling now just reading over my notes, while trying to restrain myself from giving away too many of the good bits. (It helps that some of the funniest moments can’t be described: You have to see them.)

This is clearly a society where those who make the rules have no compunction about bullying those who are forced to follow them, usually in the pettiest of ways. (Think of John Cleese berating his hotel staff on Fawlty Towers.)

So it’s no surprise when David, prompted by the demise of his brother (a moment in which it must be said that the film’s bleakness goes over the edge), sets out to join the outlawed loners of the world. Of course, they turn out to be just as hidebound in their enforcement of the status quo as the pro-marriage folk. And of course just when love is forbidden to David is when he finds it.

The Lobster is the first English language film by Greece’s Yorgos Lanthimos, who first gained international attention with his second feature, Dogtooth (2009), a prize winner at Cannes and nominee for best foreign language film. In that and his next film, Alps (2011), he satirized other social structures: childraising and mourning. The Lobster is equally as absurd (I know it’s the third time I’ve used that word, but it’s inescapable), but with a heightened sense of the ridiculous. It might be that he’s working with professional actors for the first time, though the flat, fearful monotones he has his cast use flattens out their distinctiveness. It openly references cinema’s greatest satirist, Luis Bunuel, but the tone is often closer to the extreme British satires of the 1960s and 70s, like O Lucky Man!, The Ruling Class, or The Magic Christian. The larger meaning may in the end be no more than that the many are never justified in restricting the rights of the individual, and the second half of the film loses steam. But the best parts of The Lobster made me laugh more than any movie in recent memory.