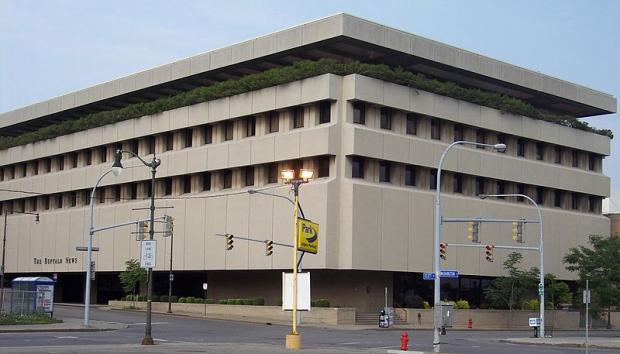 What the hell is happening with the Buffalo News?

That’s a question I’ve heard a lot over the past month. I haven’t worked there in nearly 10 years, but I’ve got friends who are still in the business and I keep an eye on industry trends, so I’ll try to parse it out as best I can.

For years the News looked like the safest bet in regional journalism (sizable metropolitan dailies that aren’t the New York Times or Washington Post). The paper, thanks to its ownership by Warren Buffet’s Berkshire Hathaway Company, wasn’t burdened with the debt that had turned countless newspapers into money pits in the last 20 years. Its market penetration remained among the nation’s highest for a long time.

Even the News’s late move into the digital world didn’t hurt it too badly. It was able to avoid some of the mistakes other papers had made.

The News had also gone deeply into the printing business to make up for some of the ad revenue it had lost in recent years. It prints the regional edition of the New York Times and a number of other local publications (Pennysavers, college newspapers, etc.)

But the perfect storm striking newspapers specifically and print publications in general didn’t skip the News. Every time a department store goes out of business (think Bon-Ton, for example), it can mean as much as a million dollars in lost advertising in a year. Those Sunday inserts don’t come cheap. And multiply it by all of the other businesses that have folded.

Meanwhile, Craig’s List has claimed the classified ad market, car dealers are increasingly relying on their websites, and Google is claiming increasing percentages of the overall ad market.

So when Trump’s tariffs on Canadian paper hit the fan (affecting not only the print edition of the News but its printing business), the paper became more vulnerable than it had been at any time since the closing of the Courier Express in 1982.

For a long stretch during the 1990s, the News was making more than $50 million a year in pre-tax profit. Over the last few years I had heard from News employees that the expectation was $10 million a year in profits (I’m not sure if that was pre- or post-tax). With that was an understanding with the union that the News would have no layoffs unless the paper found itself in serious straits (at least that was the understanding when I worked there).  What constituted serious straits was a bit nebulous.

But when the News lost $1.8 million in the first quarter of 2018 (the paper’s first quarterly loss in 40-plus years), management clearly saw it as a state of emergency. Hence the email sent from editor-in-chief Mike Connelly to the staff on May 7. The result is a lot of buy-outs, but from what I’ve heard not really optional buy-outs. The impression I’ve gotten is that it’s “take a buy-out or else.”

Well, the outlook isn’t good. Editor Connelly has said since he came to the News in 2012 that he wants to make the News a “digital-first” publication. His hires have overwhelmingly been digitally oriented. He has no love of unions, either, and is known for his abrasive—even vindictive—nature. Employees are ready for a rough ride.

▪ One of the worst possibilities is cutting back on daily print editions. That’s what has happened in Syracuse, Cleveland, New Orleans, and other cities with Advance Publications newspapers. Their home delivery has been reduced to three days a week. People in Lockport and Niagara Falls have already seen their Tuesday print editions done away with. It could happen here, particularly with rising paper prices, paper shortages, and low advertising sales for some days of the week.

▪ Earlier deadlines and fewer reporters mean that local government meeting coverage, frequently the source of accountability reporting, is going to take a hit. It already has seen serious reductions over the past decade, with the region’s hinterlands getting scant coverage.

▪ Other beats are likely to disappear. High school and local college sports may take a hit. Medical/health coverage is likely to decrease, given the buy-out of the paper’s main health reporter.

Whatever the effects, it’s not likely to make a better Buffalo News. There will be fewer people putting it together, and people tend to not to do more with less; they do less.

Many of the problems afflicting the Buffalo News are predictable, given the media economic  climate. But what’s happening in the sports section isn’t.

Columnists Jerry Sullivan and Bucky Gleason and Sabres reporter John Vogl are all taking buyouts. One of the inside editors has been moved to a news staff reporter position. So what does that all mean?

It should be understood that Sullivan and Gleason weren’t looking for buyouts. They other two moves weren’t being sought by the employees either.

Sullivan and Gleason were being removed from their columnist positions and were offered buyouts. They took them.

The reason being given was that their columns were too negative.

In his tweet announcing he was leaving, Sullivan said, “They felt my voice was becoming bad for business.”

I’ve accepted a buyout today after the News took away my column. They felt my voice was becoming bad for business. It’s been a privilege to cover Buffalo sports for 29 years. I wrote for the readers, who deserved a fair, objective and passionate perspective, even when it stung.

Yet Sully and Bucky, as they have come to be known to readers and viewers, have been among the News’s most recognizable “brands” over the past decade or more (in Sully’s case, 29 years).

After a Bills game, in particular, the audience may not have agreed with them, but it wanted to know what they thought.

That’s why the News put them behind microphones and in front of cameras, eventually landing them on WGRZ-TV. The understanding in media today is that creating that kind of brand is what works. Those are the people who the audience know.

It doesn’t matter how good most print reporters are, their pictures don’t run with their stories. Most people have no idea what they look like; when they leave, most people don’t notice.

But the columnists are the ones whose photos look you in the face every morning in your paper or on your tablet or phone. They’re the ones putting the events of the day into perspective, whether you agree with that perspective or not.

Through most of this millennium Bucky and Sully have been the voice of the fans in a city frustrated by impotent professional sports franchises. Negativity also happened to be honesty.

So why would the News push two of their most recognizable assets out the door?

There are no skeletons in the closet. I’ve known both for roughly 30 years and the only thing they might be guilty of is an excessive passion for sports—something they share with a lot of Western New Yorkers.

That leaves a couple of choices.

Either the leadership at 1 News Plaza really is that stupid.

Or perhaps pressure was coming from someplace like One Buffalo, where they seem to be a bit twitchy about criticism. And if the News, which has been making an increasing amount of its income from printing, was to pick up, say, printing of Buffalo Sabres game programs or Buffalo Bills materials…well, that would be good for business, right?

Neither answer is a good one.

Meanwhile, I wonder if The Athletic is recruiting anybody to cover Buffalo? I think the News may have just given them a gift.