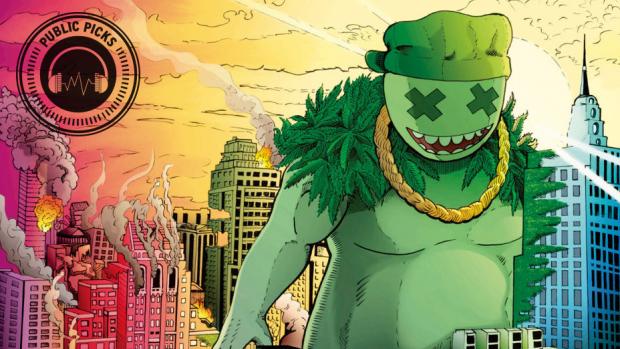 The album begins with Frigid Giant rapping smoothly and sharply over Cee Gee’s classic hip hop beat, stand up bassline and low key guitar melody on “Enter: The Green Giant.” “All Blood Runs Red” has Giant rapping ominously over demolished beats before moving into “No Superstitions,” which flows like a classic Eminem hit. “Blue Dream,” a mid-album highlight, comes with features from a pair of Buffalo rappers, Genecist and Mad Dukez who rap over a King Geedorah-esque sci-fi-inspired beat. The album wraps with a bonus track titled “Big Lebowski,” a head-bobbing, golden era hip hop-inspired personal statement in the form of an ode to the dude.

The record comes complete with comic-book-inspired artwork featuring a massive monster that appears to be a mash up of the two musicians—illustrated by Delgado, who is also visual artist by day. Stream the album in full on Bandcamp today.