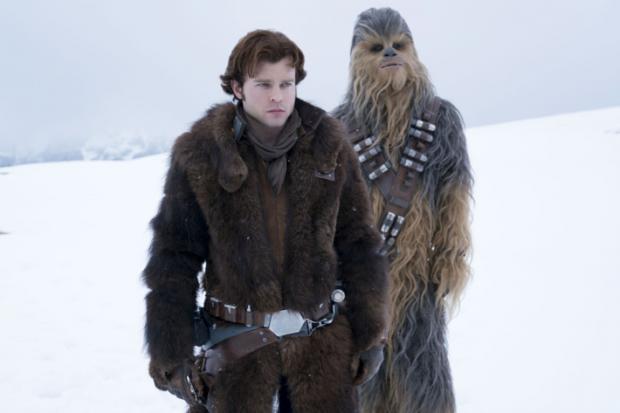 The TV ads proclaim “The summer belongs to Solo,” but the Correlian smuggler played by Harrison Ford in four Star Wars films and by Alden Ahrenreich in this Disney prequel barely managed to capture Memorial Day weekend, a box office disappointment for the House of Mouse. Solo: A Star Wars Story is the fourth Star Wars entry ordered by Kathleen Kennedy at Lucasfilm, and the second released in the last five months. It’s an origin story that never needed to be told. How did Han Solo get his blaster? How did he meet Chewbacca? Will we see him win the Millenium Falcon from Lando Calrissian (a charismatic Donald Glover) in a card game? Those questions and others you probably never asked are answered. Ahrenreich exhibits boyish charm as our anti-hero, and the film’s failure does not fall on his shorter-than-Ford’s shoulders. The script by Lawrence Kasden, an old pro at the Lucasfilm franchise factory, and his son Jonathan, lacks momentum or tension, and the direction (Ron Howard took over after original directors Phil Lord and Christopher Miller were famously fired with only a few weeks of filming left) has a slapdash feel, with poorly staged action and ugly cinematography. Woody Harrelson has some fun as Han’s criminal mentor, but Emilia Clarke fails to generate the sparks Carrie Fisher did with Ford as the love interest. A few grace notes will please some fans, but it’s a tired, lackluster affair that seems to have failed its only real purpose, which was to generate revenue for Disney. —GREGORY LAMBERSON