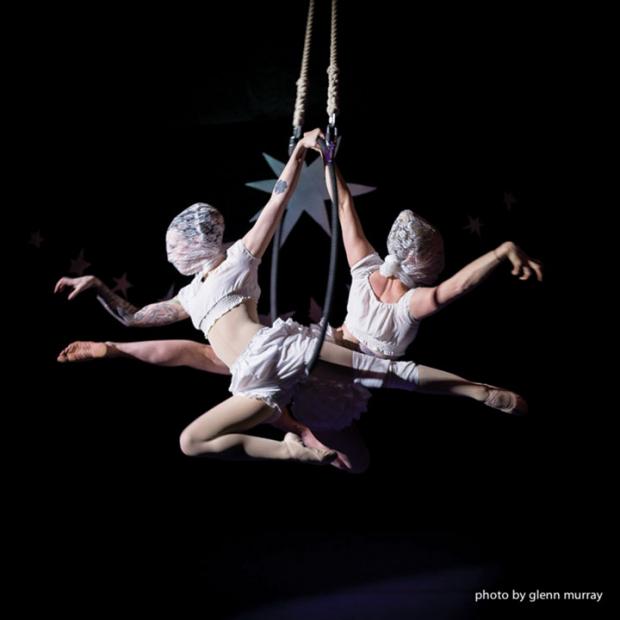 Packed into a recently renovated industrial garage outside Larkinville, audience members watched as Sarah Caputi writhed from two hanging pieces of silk. Clad in a white leotard, her sea green hair pulled back in a bun and face painted so the eyes were accentuated, she flailed her legs rhythmically, weaving each one in and out of the hanging cloth, while pulling herself upwards. As her two dance partners continued their routine on the ground—some 18 feet or so below—the spotlight pointed upwards, as Caputi unclasped her hands, and spun in a controlled freefall downwards.

She gracefully stopped several feet above the floor, her legs still enmeshed in the two fabrics, and arms outstretched as if to say “ta dah.” She was still upside down. The crowd roared in applause as she quickly reached towards the cloth again and readied herself for another maneuver.

Caputi and her dance troupe were one of 13 acts to perform earlier this month in an event entitled ‘A Dream of Flying.’ Held on May 6, the performance celebrated the official public opening of the Bird’s Nest, a community of circus arts performers who will also offer classes.

The show itself examined the blurred lines between reality and dreaming, and the many forms our dreams can take. It also highlighted one of the collective’s most unique aspects: gathering a broad spectrum of performers under one roof.

Performances from Saturday showcased various aerial arts, including the use of aerial silk, a hanging rope known as corde lisse, the lyra (an aerial hoop), and the trapeze. It also encompassed different forms of dance, baton twirling, and hula-hooping.

The road to opening had not been easy, though certainly fruitful. Founder and owner of the building, Ben Madoff, had announced in December his plans to open the Bird’s Nest, and had launched an online fundraising campaign to pay for the renovations and other required outfitting.   He recalls, “the campaign was an extraordinary journey for us.”

The community response to the Bird’s Nest had been highly enthusiastic. Local businesses responded to them, offering a wealth of partnerships and donations. “We put our campaign online, and we just started getting messages from people like, ‘Hey we’ve never met, but I’d like to help out,’” Madoff said.

“If we had different events, we’d go to a business and ask for support, like donating a raffle item,” Madoff explained. “All the businesses in the city were extremely generous. We spoke frequently with the Breadhive and Bootleg Bucha.” Emilee Philips, the de facto program coordinator at Bird’s Nest,  organized a raffle and silent auction during their launch event, in which Hyatt’s Art Supplies and Flying Bison Brewing Company donated baskets. The Breadhive Bakery gave them a three-pound pretzel as a sign of friendship.

Numerous other health-oriented organizations also lent their support, including East Meets West Yoga, Love in Motion Yoga, Bike-or-Bar, and the Buffalo Athletic Club, among others.

“In a way, fundraising was the obvious goal,” Madoff recalls, “but all the secondary goals are what we’ll remember the most because those are the partnerships and friends we made along the way.  It’s what is driving the place in the future.”

Those financial gains, however, allowed for the transformation of the Bird’s Nest space.

Tucked into a small side-street, the Bird’s Nest is almost equidistant between the burgeoning Larkin Square businesses to the west, and Buffalo’s old manufacturing legacy to the east. The area is emblematic of the transformation that’s taken place in their studio.

According to Madoff, the building was formerly a storehouse of junk for a contractor. Renovations included equal parts cleaning out the space and construction: “A lot of renovations were just tearing things out. They had accumulated 30 to 50 years’ worth of junk. They had 50 years of old electrical work and pipes on the ceiling.”

Preliminary construction was more basic, “just fixing things that are not in good condition,” Madoff said. They leveled the concrete of the warehouse’s floor, fixed the many broken windows, replaced the unusable garage doors, and added heating. “We just needed it to be made more user friendly,” Madoff said.

We’re getting a new floor!

The structural integrity of the building was extremely important, as well, as aerial artists must be ensured that the fixtures they are attached to will not give way. “The first thing we did was have a structural engineer look at the building.”

They purchased a number of rigging points—heavy duty clamps that are fixed to ceiling beams that aerialists will then use to hang silks, ropes, and other equipment. According to Madoff, “You need to use rigging hardware that is rated for at least ten times the dynamic load it’s expected to see. Usually, this is listed at five to 10 times the person’s weight.”

They purchased other equipment as well, such as two-inch thick carpet-bonded foam and crash pads. The foam covers nearly half of the space’s floor, but could also be rolled up and easily moved as necessary.

“We’ve only bought about thirty percent of the total equipment we’re expected to get, so far,” Madoff said.

The space’s 20-foot-high ceilings also offer aerial artists greater possibilities for practice, as well. “As you advance, you really need the height of the ceilings,” noted Larry ‘Larris’ Acker, an aerial artist and native of Buffalo.

“You don’t find this kind of height just anywhere,” Philips added, “In order to learn how to climb, and condition, and be on some of the more challenging aerial apparatus, this [space] is what you need.”

While the Bird’s Nest’s physical space is significant, it’s the sense of community that Madoff says he’s proudest of.

Madoff, a native of Ohio, had formed a group of acrobatic performers known as Acro Yoga Buffalo several years ago. The community was small, and practice was typically limited to Bidwell Park in Buffalo, or else other outdoor and impromptu locations.

Acker and Caputi had similar experiences.  Acker said he had initially practiced in a small invite-only theatre. Caputi had taken poll-dance classes, though the studio did not offer other art forms.   They were without an adequate space, and the community of performers was very limited.

The Bird’s Nest, conversely, encompasses a wide array of disciplines: “The community has grown. The two largest communities are acro and aerial, and it makes me really happy that they’ll be in the same place,” Madoff maintained.

Circus culture is now becoming more communal in teaching and in learning, though this wasn’t always the case. He explained, “when my teacher was learning partner acrobatics, circus culture was just turning a bend from where people did not share their skills. You don’t share your trick because you do that in your show, and it’s yours. You don’t want to give away your secrets because they’re proprietary.”

Madoff believes this sense of individualism is changing. “What it’s really evolving into is…people are starting to teach each other. In a lot of different cities, circus arts are growing communities of people who want to practice together.”

In addition, Acker believes that teaching and sharing techniques can make performers’ lives more financially sustainable. “Back then performers were very underpaid, but people now are seeing, hey I can teach and make some money and a living, because maybe you don’t have a gig for six months.”

The interest in circus arts seems to be growing throughout the United States as collectives continue to grow and proliferate.

The Bird’s Nest’s opening performance is one clear indication, as sales for ‘A Dream of Flying’ sold out within two to three weeks, according to Philips. Demand was so great, that she asked performers to put to a vote the option of selling tickets to the dress rehearsal. “Everyone was enthusiastic and feeling prepared enough,” she explained. Tickets for the dress rehearsal sold out, as well.

As practices such as CrossFit and yoga have also become popular in the US, classes in circus arts offer a new way to exercise.

“I have a lot of friends who are tired of going to the gym, and don’t want to get exercise that way,” Caputi says. ”They’re saying, ‘this [circus arts] looks fun, and I know someone who’s doing it, and it looks super cool and badass.’”

She also believes that the physical rigor is not to be overlooked: “A lot of this stuff is an insane workout, and you don’t realize it until you’re done. Even noticing in my own body how much stronger I’ve become in the last two years.”

Unlike other forms of exercise, the circus arts bridges art with exercise. “I was always artistic and I enjoyed sports in school,” Caputi explained, “I think many people don’t think they go together, but here they do.  You’re combining these things and creating them every time you [practice].”

Following the recent opening, the Bird’s Nest will provide space to both performers and students. The first disciplines offered will include acro yoga, trapezing, the lyra, silks, and hooping (the use of the hula hoop). While currently there are six paid instructors, Madoff expects this to increase over time.