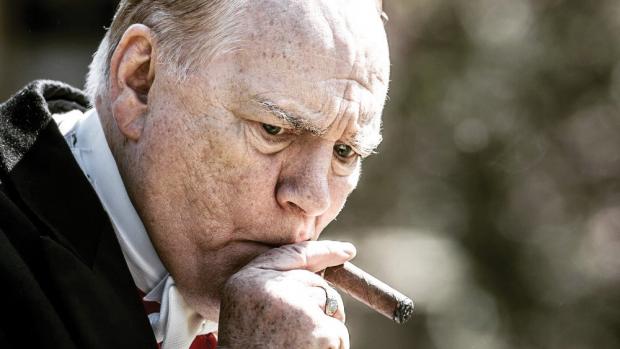 What do Gary Oldman, John Lithgow, Timothy Spall, Michael Gambon, Richard Burton, Orson Welles, Donald Pleasance, and Brendan Gleeson have in common? All have played Winston Churchill, one of the most important figures in the history of Great Britain. And they’re only the best known: imdb.com lists more than 200 portrayals of the great man on screens large and small.

To these add Brian Cox in Churchill. While the title might lead you to expect a full-fledged biography of the man, it actually covers a scant few days. Specifically, these are the three days prior to D-Day, 73 years ago this week, when the Allied forces landed on Normandy to begin a large sale attack on German forces in western Europe. The importance of the event can’t be underestimated: The premise of the cable series The Man in the High Castle, in which the United States has become a territory split up by Germany and Japan, comes from imagining what might have happened if the plan had been called off.

And calling it off is just what Churchill wants to do. Nearing 70, he has lived his life sending young men to their deaths. He is haunted by the memory of Gallipoli 30 years earlier, in what was supposed to be “the war to end all wars,” a similarly ambitious attack in which as many as a quarter million died. As much as he despises the “big men fighting from the safety of their armchairs,” that is what he has become. Even less than that, as the final okay for the invasion lies in the hands of General Dwight Eisenhower (John Slattery).

Directed by Jonathan Teplitzky (The Railway Man), Churchill presents an unexpected portrait of its subject, passive and indecisive. It offers a lot for an actor willing the seize the bit and gnaw on it, as Cox is more than capable of, most theatrically in a scene in which Churchill seeks help in prayer. But it’s a portrait in a fuzzy context, with other characters like Eisenhower Clementine Churchill (Miranda Richardson) reduced to supporting functions.

The Wedding Plan (originally titled Through the Wall) is the second feature from Rama Burshtein, an Israeli who came as an adult to religious orthodoxy, which has informed both of her films. 2013’s Fill the Void looked at an 18-year-old girl who thinks that she has a limitless future in front of her until her mother begins to pressure her to marry her late sister’s husband.

The new film concerns an older woman for whom independence has not brought happiness. Michal (Noa Koler) is 32 and more than ready to be married. In an opening scene with a mystic she visits to cure her problems, she says that she wants love. When pressed, she defines that as everything it means in a social context: “To be normal, to be respected. I don’t want to be alone anymore. I’m sick of being handicapped.”

A match is made, and Michal sets her wedding date for the last day of Hanukkah. At last, she feels, her troubles are over. That’s a feeling she’s not willing to relinquish when her groom-to-be breaks up with her three weeks before the date. She continues to plan her wedding. The only thing she leaves for God is to bring her a groom.

Burshtein doesn’t critique the social restrictions that Michal feels, which keeps her film from feeling parochial: Women feel pressures like these in even the most progressive cultures. Koler makes of her a surprisingly ingratiating character who is both happy with her life and uncertain of the deal she has struck with God; a stumbling block in the conversations she has with the men she meets, who range from an Israeli pop star to a deaf-mute psychologist, is the fact that, like Groucho Marx, she doesn’t seem to want to join any club that would have someone like her for a member.