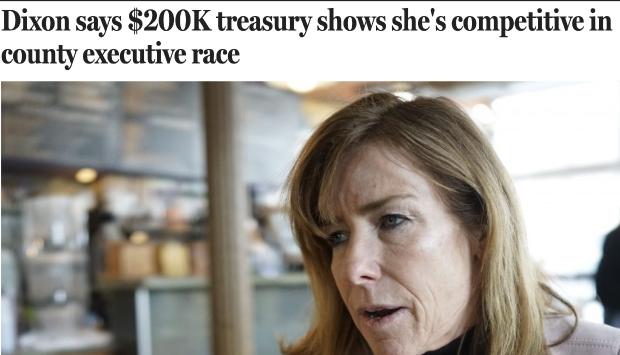 News reporting shouldn’t be a “choose your own adventure,” but the Buffalo News’ Bob McCarthy has a tendency to simply write down what people tell him and report that as fact, without checking. It is lazy horse-race reporting that purports to inform voters about inside-baseball fundraising, but offers zero substance and questionable facts. It’s candy for the Illuzzi-reader crowd.

On May 22, the Buffalo News published a story claiming that the Republican-endorsed candidate for County Executive had ”raised more than $200,000 since declaring her candidacy in March” and that this fundraising prowess lent her the “credibility to raise even more and prove competitive against Poloncarz.”

The News report that Lynne Dixon, the Republicans’ candidate for County Executive, raised over $200,000 since declaring her candidacy in March is false. She has raised less than $200,000 since January, and of that less than $100,000 can be counted as actual contributions from regular people.

and, according to Republican direct-mail wunderkind Chris Grant,

“I think she has showed an energy and a buzz around her campaign that has not been seen in a while,” he said. “There is a different element of folks who are attracted to her campaign, and she is tapping into something very different here.”

This is just the latest example of Bob McCarthy transcribing whatever the last Republican apparatchik told him, and reporting it as fact. McCarthy’s animus towards Democrats and their party committee chairman Jeremy Zellner is thinly veiled, and all of this “reporting” isn’t so much about facts as it is about feelings.

My initial reaction was this:

I’d probably wait for actual proof of this before I reported this hearsay. https://t.co/XCJOmSBuuS

So tomorrow when the filing posts, I assume there will be this much energy exerted saying the report was accurate, correct?

Well, the filing posted. The report was wholly inaccurate.

I guess it helps to check what a source is saying.

Of the $26,675 ”miscellaneous receipts”, $25,000 of it was a straight-up transfer from the Erie County Republican Committee. The rest was from local committees. Republican committees throwing money at a Republican race is hardly indicative of some sort of groundswell of small-i independent grassroots support for “change.”

Another $17,000 came from other campaign committees, LLCs, and PACs, and of that fully $10,000 came from one source — the “Friends of Nick Langworthy” campaign account. While Grant and Dixon declared that, thanks to fed-up West Seneca moms donating “more than” $200,000 since March because Dixon’s message was resonating, it turns out that less than $142,000 came from individual contributions & partnerships.

Breaking down the individual contributions, Pigeonista desperado and nominal “Democrat” James J. Eagan gave $20,000. Brian Lipke of Gibraltar Steel gave $10,000, and Pat Hotung of Main Place Liberty Group cut a check for $25,000. Take away those three mega-donations of $55,000, and regular people donated about $87,000 between January and May. Not too bad, but also not $200,000.

The problem here is not so much about whether Lynne Dixon raised “more than $200,000” since “March” and whether that is indicative of grassroots demands for change — the issue is that by the time the actual numbers were released to the Board of Elections, the Buffalo News’ Bob McCarthy had already reported this unsubstantiated hearsay, which was framed as evidence of “people…ready for change.” The whole meme — the whole narrative — collapsed the moment the actual filing was made, and there is no correction or other indication in the News that Dictaphone Bob was duped again, caught transcribing whatever the last Republican told him and not checking the facts.

“A lie travels around the globe while the truth is putting on its shoes,” goes the quip.

If we can agree that even $87,000 is a good take, I’m sure Dixon will continue to raise money well. So, I don’t understand (a) the need to exaggerate (i.e., lie) about the sum; and (b) why the Buffalo News just goes ahead and prints whatever Chris Grant says. Incidentally, if all of this was to show that West Seneca moms have concerns that don’t quite include the Paris Climate Accords, that is not reflected in Dixon’s financials and is, at best, puffery. Of 15 individual donations from West Seneca residents, 3 were female. The vast majority of the remaining donations were also from men.

“She’s pitch-perfect for Cheektowaga, which is not a radical, progressive town,” Grant said. “When the Democrats get away and veer into this liberal nonsense, that’s when they get in trouble.”

In 2015, Poloncarz faced off against a folksy former county legislator. In Cheektowaga, Poloncarz received 8,523 votes. Ray Walter received 3,555. In 2011, Poloncarz earned 12,315 Cheektowagan votes vs. Chris Collins’ 9,863. In 2007, however, Chris Collins trounced Jim Keane, but it seems as if Cheektowagans are ok with Poloncarz, who is not a “radical, progressive” of any sort.

Dictaphone McCarthy needs to check his facts, and the Buffalo News should not just publish what amounts to Dixonian propaganda without verifying the numbers. It’s all of it a disservice to the public. The coming months will see whether Dixon offers a genuine agenda beyond just throwing shade at Poloncarz and running on a platform in defense of one-use plastic bags.

What we do know is that Dixon and her partisans can freely urinate on Bob McCarthy’s leg, tell him it’s raining, and he’ll publish a few hundred words about the big rainstorm.