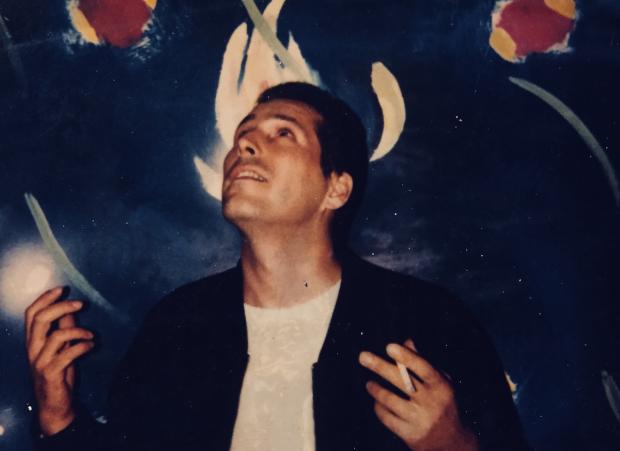 Saver of lost souls and broken credenzas
Speaker of long forgotten adages
Hoarder of salacious memories
Feeder of hungry birds, feral cats and foreigners
Squatter, Artist, Curmudgeon, both ahead and utterly behind his time
The seeds you planted live on…beloved Victor. —Leah Glickman

It was sometime in the late 1980s when my young daughter, Maria, and I happened upon a charming café called Buffalo Rome on an urban block of little distinction. My recollection is not clear on whether it was the first time I had sat in the café, but it was the first memory of meeting Victor Mirando. “That man looks like an artist,” observed Maria as we both watched the uncommonly handsome 30-something-year-old man in black gracefully wipe tables. Fully aware of our presence, I could tell he was as interested in us as we were in him.

“I am,” he said with an ever so pleased smile.

Bits of an artist and magical realism

Ahead of his time, Victor’s aesthetic combination of art, design, non-traditional music, quality food and drink, and the most diverse patronage around had not been “a thing,” as it is now. Not in the 1980s. Not in Buffalo.

Romantic souls of all walks seemed to be drawn to the alluring vibe of Buffalo Rome. There, lunch hour life seemed to move at a Sunday brunch in Tuscany pace. The ever present cat found stretched out on the sunlit banquettes or looking for opportunities, often successful, to lick the butter on the table was classic of Victor’s nonchalance when it came to ordinances. To know of the place was like to be in on a secret welcoming handshake. However, if customers became disenchanted over the cat, the allowed smoking, or the wait time to get their food, Victor was A-okay with them going elsewhere—he could be quite the grouch about people’s accustomed restaurant-going expectations, and he was utterly indifferent to lunch-hour time constraints and hunger pangs.

At home, he sometimes cared for dogs of friends who were called out of town on jobs or teaching assignments. One dog, in particular, a cream-colored Labrador named Bookshelf, was his loyal companion and charge for years, yet, he always claimed, “He’s Chris’s dog,” despite the fact that he kept the pet as his own up until the dog grew old and weak with assaulting flatulence and grotesque warts. Several months after “Chris’s dog” died, in an uncharacteristic moment of sentimental release, Victor declared, “I miss Bookshelf.”

Some years before rebuilding the new Buffalo Rome on Porter Avenue—a coffee shop version of the old place—Victor acquired a big old brick Italianate house, dilapidated and abandoned, on the West Side. By squatting in it, withstanding winters with a space heater, he singlehandedly, room by room, rehabbed it into a bed and breakfast, of sorts, for guests—visiting or staying. Rent, if he did collect any, it was often pay-what-you-can.

Up until last week: Victor, someone’s dog, whatever stray cat(s) or out-of-luck friend might be found living in the Jersey Street house or sipping a beverage under the crystal-chandelier-lit grape arbor.

I hardly knew Victor when he gave me my first paying design/build job. I was loitering around the newly reopened Buffalo Rome when he told me he needed a glass rack for the four-seat, slate-covered bar in the center of the cafe. He knew I was in the Design Studies program at UB, he said, “Design something, designer.” Something like that, anyway.  There were no instructions, cues, or demands of any kind.

I suggested a budget; he shrugged. “Sure.”

After some thought, I went for a futuristic-with-the-edges-knocked-off look—mechanical, but shopworn. The rack was made of layers of shaped MDF, painted white and then distressed, with bolts showing and aluminum brackets connecting it to the wall.

I installed it; he paid me, offering no feedback. Victor had created the whole cafe, every last detail with great care and a sharp eye, then, paid some kid whose work he had never seen to design and build the most visible thing in the room.

In the third version of Buffalo Rome, on Porter Avenue, there hangs a photo of the old Rome, the semicircular rack hanging in the middle of it all. I learned a lot from that job, taught by Victor mostly without him saying a thing. —Matt Kantar

There is a tall hedge on the west side. Around three o’clock in the afternoon, a cacophony of bird calls begins there. Should you approach the hedge, the noise stops and hundreds of sets of eyes peer out through the leaves. As you walk away, the screeching begins again. The birds are expecting to be fed. Sometimes they go down the alley, searching for their loving benefactor, and urging him to hurry home. He has been nurturing and nourishing people all day in his café. Now it is the birds’ turn to be taken care of, in the lush and verdant yard he created. They are waiting for Victor. He is not coming home. —Patricia Watson

In the end, Victor’s many signature one-liners that he often used to summarize a situation will likely live on among those who knew him. One such adage, “private Idaho,” could be applied to anyone who lived in their head, stood alone on a topic, did their own thing, or was plain delusional.

He built a world he wanted to live in and it was a wondrous place: Victor Mirando’s “private Idaho.”