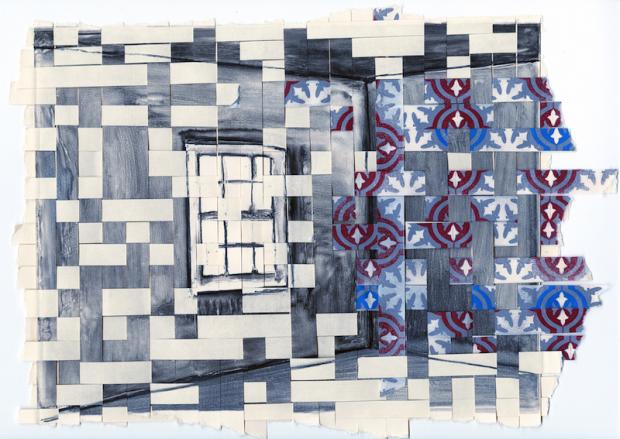 Maybe there’s a scientific name for it—though probably not—the phenomenon—as notably in the initial intensity stages of being in love—of not being able to clearly recollect—despite all efforts and exertions—the face of the absent beloved. “Clearly” being the operative word. Not by any means a total failure to recall what she or he looks like. Not that you might not recognize him or her on subsequent actual encounter. Nothing like that. But instead of an integral and precise mental image of the loved one, a patchwork of partial images, incomplete, and unsatisfactory.

But not just a loved one in a romantic sense, but anyone deeply beloved. Or anything similarly cared for, or cared about. A place, a time, a moment.

Llobet’s work consists of silkscreen-production materials, including a large black and white reiterated image of his late mother, plus colorful abstract pattern art reminiscent of tile decorations prevalent in his native Costa Rica—Arabic art in historical origin, filtered through medieval and early modern Spain, then to colonial Costa Rica—cut into strips—the black and white portrait of the mother, and the colorful tile decorative art—and woven—verticals and horizontals, warp and woof—into paper tapestry combinations of the one kind of imagery and the other. Similar but unique weave multiples, tied into one another by random extended vertical or horizontal strips. The portrait components thus fragmented and distorted, with redundant features and missing features. (A little like images in a fun house mirror, like in the Orson Welles movie.)

Whereas MacNeil makes multiple monoprints by painting on a sheet of plexiglass, then press-printing the wet paint image onto paper—one monoprint—then repainting the plexiglass, changing the image slightly from the previous iteration, and press-printing again. Over and over, evolving the original image. For a total of 450 images—monoprints—in the current piece, all 450 of which are shown—the full evolution—in a rapid-sequence video, about a minute or so in duration. Alternately, some of the physical monoprints—numbers 121 to 299—there wouldn’t have been room for all of them—are displayed row by row and column by column across several gallery walls.

McNeill’s images are architectural, by and large. Without a human figure. (Which may or may not be implied.) Progressing from first tentative sketch marks, to simple rectangular framework, to full-blown architectural structure—with pillars and cornices—but then something more problematical—lose the pillars, lose the straight lines and right angles—something more cave-like, more like a dream sequence—or nightmare—that then gradually transforms back—or seems to be about to—to more rational constructed space. Within the cave hollow, suddenly some verticals—support posts—and horizontals. End of video. End of sequence.

And in a single collaborative work, MacNeil transitioning more toward Llobet mode. A large weave work in a variety of abstract patterns and non-patterns, and occasional pictorial elements. But non-human pictorial—more like monsters, demons, dragons—from old woodcuts or engravings.

MacNeil and Llobet are fellow UB studio art program MFA candidates. Both are primarily painters and printmakers, but MacNeil has been extending her work into installation and performance art. Llobet has been extending to street art, mural art, public art. Their WNYBAC exhibit continues through June 2.