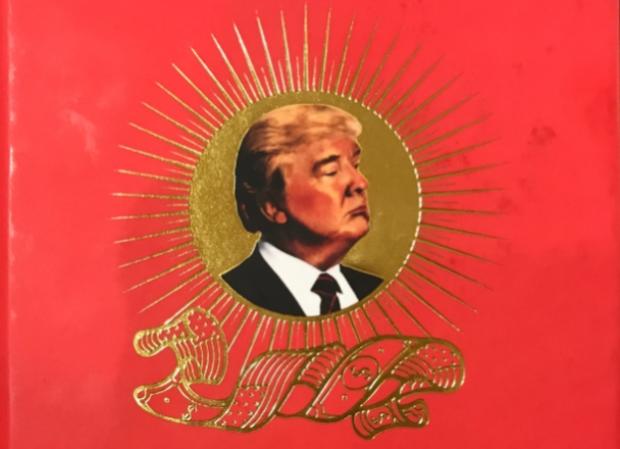 It is Year Zero — the year that the United States turned its back on the great postwar alliances of the industrialized, democratic western world.

Never before has an American President treated our European allies with such dismissive disrespect.

It is Year Zero — the year that a Republican candidate for Congress brazenly assaulted and battered a young reporter because he asked a relevant, newsworthy question twice.

He then released a statement filled with lies, despite the statements of four witnesses, and the existence of a tape that clearly revealed what happened.

It is Year Zero — a year in which a man who wished President Obama dead and called his wife an ape still sits on the board of a predominately minority school district.

Carl Paladino is an unapologetic, deluded racist who belongs nowhere near the education of any child, anywhere, at any time.

It is Year Zero — a year in which that congressional candidate was elected to Congress the day after he battered and injured an innocent reporter.

He only apologized after he had won.

It is Year Zero — the year in which so-called “conservative” pundits and the neofascist “alt-right” laughed about the battering of an innocent reporter, and insulted the victim’s manhood.

Even the right-wing National Review is appalled.

It is Year Zero — a year in which WBEN listeners here in Buffalo texted in virtual howls of derisive laughter at the notion of the big, tough Congressional candidate beating the shit out of a reporter.

Ask them if they’d think it was so funny if some intemperate local politician assaulted WBEN’s Mike Baggerman or Brian Mazurowski.

It is Year Zero — the year when Donald Trump quite deliberately failed and refused to approvingly mention the cornerstone of the NATO alliance, Article V of its constituent document, which holds that an attack on any NATO member is an attack on them all.

Article V has been invoked exactly once — in defense of the US after 9/11.

It is Year Zero — the year when Donald Trump decides to treat the NATO alliance — a bulwark first against aggressive Communist expansion, and now against belligerent Russian provocation and jihadi terrorism — as some sort of Belgian Mar-a-Lago with a steep initiation fee where payment is somehow due the United States lest members be expelled.

That’s not what it is, and not how it works. NATO defeated the Soviets and the Warsaw Pact. It protects its members — most significantly Estonia, Latvia, Lithuania, Sweden, Poland, and Montenegro — against Putin’s Russia.

It is Year Zero — the year where the growing evidence of Trump campaign collusion in 2016 with Russian intelligence drips out slowly, like water torture as all involved lawyer up and begin to invoke their Fifth Amendment rights.

It is Year Zero — the year in which Donald Trump fails to understand how the EU works, despite having had it all explained to him 11 times when German Chancellor Merkel came to Washington a few months ago.

You don’t get to cut a separate deal with individual EU member states; the EU consists in part of a trading bloc and a customs union.

It is Year Zero — when Donald Trump causes weekly international incidents with our closest allies, most recently characterizing Germany as “evil” because it dares to sell BMWs, VWs, and Mercedes in the US pursuant to trade deals with the EU.

Mercedes builds in Alabama, BMW builds in South Carolina, and VW builds in Tennessee. It’d be a shame if anything happened to that.

It is Year Zero — when Donald Trump genuflects to murderous dictators like Putin, Duterte, and the House of Saud but hectors and demeans our closest allies.

When has Trump ever criticized Putin or Duterte? Even mildly?

It is Year Zero — when Donald Trump’s desire to break up the EU is perfectly aligned with the interests of Vladimir Putin’s Russia.

It is Year Zero — when Donald Trump’s belittling of NATO is perfectly aligned with the interests of Vladimir Putin’s Russia.

It is Year Zero — where the “rule of law” is a partisan issue, and the Trump Administration’s blatant refusal to abide by its own promises not to violate the Emoluments Clause of the Constitution is met with Beltway shrugs and silence.

It is Year Zero — as the Turkish strongman visiting the US sics his security forces and local thugs on peaceful American protesters in Washington DC as the Trump Administration reacts with silence.

Not a peep from the White House. No expulsions, no arrests, no one from the Turkish diplomatic missions png’d.

It is Year Zero — as Trump’s Education Secretary finds no issue whatsoever should private schools receiving federal funding decide to discriminate against a protected class of people.

She would allow federal funding of exclusive, bigoted private schools.

It is Year Zero — as Trump’s Education Secretary works to systematically de-fund and dismantle our public education system.

It is Year Zero — as the Trump Administration’s proposed budget grants massive tax cuts to the richest Americans, paid for by its poorest.

No word yet on how this makes “America great again”. Class warfare is being waged, alright — by the superwealthy and the useful idiots in office they’ve bought.

It is Year Zero — where a purported security expert, prospective Trump appointee, and elected law enforcement officer harassed a citizen for the crime of shaking his head at him.

Sheriff Clarke’s stolen valor is something you’d expect the right to be howling about. Oddly enough, silence.

During the same call, he revealed the presence of two American nuclear subs in the vicinity of North Korea — a state secret.

It is Year Zero — Trump told his Russian benefactors all about ISIS’ plans to blow up airliners.

It was intelligence from the Israelis that Trump wasn’t even supposed to repeat to our closest allies, much less a hostile power. He doubled down on this during a meeting with PM Netanyahu in Israel.

It is Year Zero — the President knowingly hired as National Security Advisor a man in the pay of the Turkish and Russian governments.

Flynn lied on his security clearance forms, to boot.

It is Year Zero. There is a revolution underway that would be fundamentally transforming the United States into an authoritarian dictatorship, if the Republicans still constituted a political party and not a radical insurgency. There is no wall, there is no repeal of Obamacare, there is no Muslim ban. So far, and for the most part, our system is protecting itself and us. Query how much more pressure it can take.

For me, this is an appalling betrayal of the very idea of America. My parents didn’t escape one totalitarian dictatorship to end up living in another one 50 years later. They didn’t abandon Titoism in order to eventually end up with Trumpism, with its corporatist white supremacy that treats hostile powers with obsequiousness and our closest allies with hostility. They didn’t leave a state with mandatory one-party elections in order to be subjected to the neofascist fever dreams of semi-literate cretins who think democracy weak and our alliances cucked.

And I’m a straight, privileged white guy. Imagine how all this feels to literally anyone who belongs to an historically marginalized or discriminated-against group.

The Trump Administration suffers from a crushing combination of arrogance and ineptitude. Luckily, our bureaucracy is such that it can continue to function even in cases of neglect — benign and malignant. There is too much news; every day brings a month’s worth, and every month brings enough to fill an average year. Yet people also see this chaos for the distraction it is.

None of this is normal, and all of it is fundamentally un-American. I don’t mean ha ha Putin’s puppet — I mean our head of state having nothing but praise for murderers and only disrespect for our closest friends.

It’s Year Zero. Time to pay close attention to who, exactly, cheers for dictatorship over democracy. Never let them forget it.