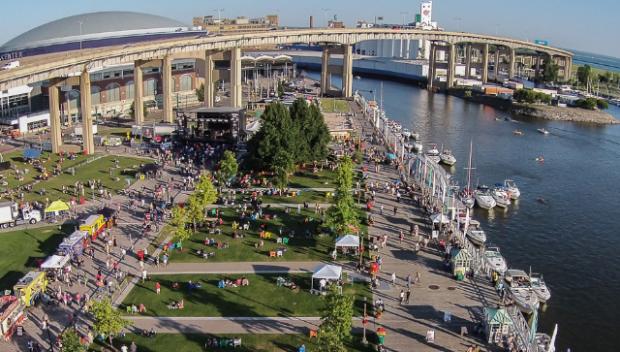 Photo by Joe Cascio via www.canalsidebuffalo.com
by
Alan Bedenko
/ May. 27, 2015 6am EST

The county’s public art partnership with the Albright Knox has brought us the wonderful Shark Girl, Silent Poets, and You Are Beautiful.

Out of every 150 murders in Buffalo, there are no arrests.

The notion of “beer-related development” is a real thing, as we see from Big Ditch, Resurgence, and Community Beer Works.

Buffalo teachers have been without a new contract for 11 years, and picketed in front of Carl Paladino’s home. To his credit, Mr. Paladino bought the teachers pizza and took it all in uncharacteristically good humor.

Canalside is hopping, and giving people from all over the region an excuse to come downtown.  That waterfront area had been a dilapidated parking lot sitting in the shadow of a long-abandoned hockey arena.

The tower formerly known as HSBC boasted a 90%+ occupancy rate in 2005. Now, it’s 5%, and the building is in foreclosure — Buffalo’s most prominent distressed property.

A majority of Buffalo’s children live in poverty.

The state’s education department got around to replacing the feckless John King with MaryEllen Elia, a western New York native who was fired from her most recent job in Florida and may be a more test-obsessed “reformer” than her predecessor.

A great many residential rental and hotel projects have popped up downtown in recent years, thanks to historic tax credits. They have been credited with revitalizing long-dormant neighborhoods and reversing squalor.

The school district is in disarray, preoccupied with personal and political acrimony rather than education.

Anecdotally, we’re told that millennials hate cars and suburbs, and are choosing to move into the city, fueling its revival.

Since 2010, the City of Buffalo has lost 2,700 residents. The county, by contrast, has gained 3,800 residents in that time. Amherst alone has seen a gain of 2,400 people. This population growth in Erie County represents a reversal of 40+ years of decline, fueled at least in part by new immigrants to our area.

If you want real evidence of a regional renaissance — not the edifice of faux revival, or twee things to distract the well-to-do - but the actual, quantifiable and sustainable indicia of revival, look at the jobs data. Buffalo-Niagara has seen strong growth in private sector employment, and the upstate unemployment rate is lower than the national average at 5.1%. In just the last calendar year, 8,100 new jobs were created in our region.

We have a lot of work to do in terms of crime, education, and ensuring that our economic good times are widely applicable. We have schools to fix, neighborhoods to rebuild, and kids to educate. Blue bikes and paddle boats won’t lift families out of poverty — but jobs will.