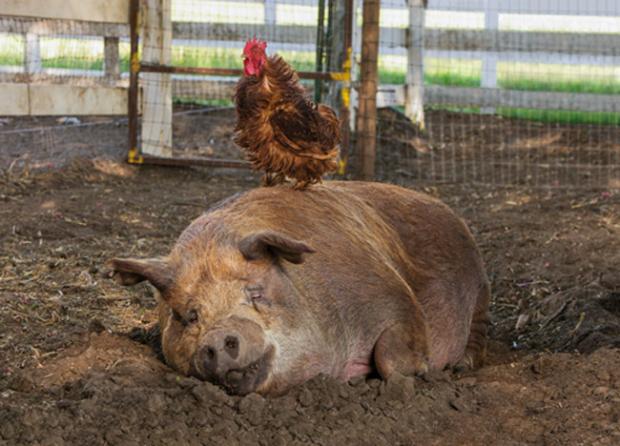 The Biggest Little Farm: Come for the cute pig and the irrascible rooster, stay for the lesson about biodiversity.
by
M. Faust
/ May. 26, 2019 9pm EST

I’m not going to lie to you: I was not in a big rush to watch any screener of a movie with the cutesy title of The Biggest Little Farm. I like to eat as much as anyone, probably more, but that doesn’t mean I’m all that interested in knowing where it comes from.

And the opening scenes of the documentary, in which we learn how a rescue dog named Todd was responsible for getting a young California couple—a cameraman and a food blogger—to go for their dream of owning a farm certainly set off my sensitivity alarms.

I’m happy to say that I was wrong. If these were tactics to bring in a bigger audience than a small documentary like this might otherwise get, it turns out they were worth it. The Biggest Little Farm is an entertaining and informative look at what it takes to build and maintain a successful small farm, giving ample evidence that small farms are the only truly sustainable ones. And it does so without any lectures on what you should and shouldn’t eat.

It was in 2011 that John and Molly Chester, at the time living in cramped quarters in Los Angeles, decided to pursue their dream of running a small biodiverse farm dedicated to providing nutrient-dense foods. After finding investors in tune with their aims, they purchased a 200 acre lot a hour north of LA. Surrounded by industrial farms that produced single crops, the lot itself had been neglected for years, the soil essentially dead.

Beginning with the task of revitalizing the soil, the Chesters and a crew of interns work on a long term plan to produce a fully rounded ecosystem, including numerous kinds of livestock and as many different kinds of crops native to the area as they can manage. As their plan starts to take root, nature starts throwing up seeming obstacles: birds that eat the fruit in the orchards, snails that destroy leaves, and coyotes that kill more than they eat. Especially when it comes to those coyotes, John has to fight to maintain his conviction that nature has a place and a plan for everything in it —a conviction that is happily proven correct.

If this sounds like dull stuff, it’s not. John Chester is an able cameraman (with more experience than he lets on here), and he has employed others to help him capture plenty of audience pleasing nature footage. Inevitably there are a few scenes that wouldn’t be appropriate for younger children, but if you have young teens in the family you’d been doing them a favor by taking them to see this over the holiday weekend instead of the newest Disney retread. Look for it at the Dipson Amerst theater.