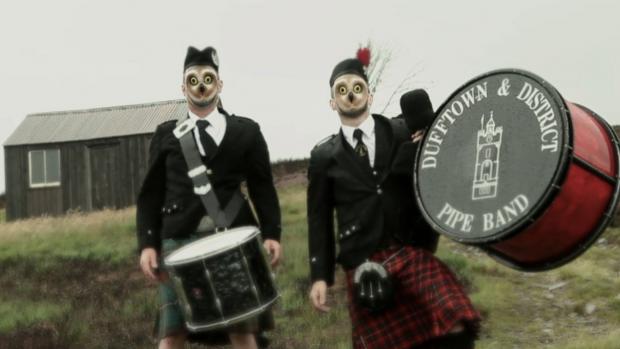 Don’t go to Jillian McDonald’s video on view at Squeaky Wheel—in their excellent new digs in the Market Arcade Building—expecting a well-constructed plot with neat and tidy characterizations and motivations. Do go expecting to get in touch with your inner shaman. The feature-length video is called Valley of the Deer. The characters aren’t types you’re likely to meet on the street, but shaman figures and archetypes. Part-human and part-animal, deer, wolf, bear, cow, fox, many more.

The premise of shamanism is that we humans have animal ancestors—which come to think about it, we do—and shamanist practice is intended to communicate with them. To assist in this heady enterprise, the shaman outfits himself in imitation of the animal species he wants to get in touch with. With an animal mask and whatever other apparel items seem useful and proper. And most propitious for the enterprise—by dint of authenticity—if the mask and other items are actual relics of an actual animal of the proper species. If the mask is the actual head—and horns or antlers, as appropriate—of a real but former member of the species.

The video characters wear such masks, disguises. Animals of many sorts. Nor do they speak, but for the most part just appear—appear and disappear, always a little ominously—against a rugged background of hills, rocks, grasses. Terrain for the most part unfit for farming. Fit only for grazing sheep. (Thus there are sheep in flocks, and their shepherds, in masks of other species.) And gray skies. And occasional structures—barns, solitary and desolate looking human domiciles, or what once were—constructed of gray stone and slate. Even occasional stone castles, sometimes in ruins. And heather, and thistle. This is northwest Scotland. Looking fierce and beautiful.

Still from Valley of the Deer.

At first there seems to be no plot at all. Just various indistinct shaman types and landscape. But later some distinct figures—archetypes—appear. Military figures, with bagpipes and drums. A sorceress figure. A virgin bride, all in white. And death in several forms, sometimes in a pig mask, with rusty sickle harvest tool. More often just as a presence, in the multiple skulls and strewn bones, and occasionally simply dead creatures—birds, other animals—with no particular shaman reference. And graveyards, with tombstones with extensive inscriptions. And amid so much death, a vitalist figure. Young, female, literally dancing among the gravestones. As if in defiance of death. As if that were a tenable proposition.

Not one story here, but the suggestion of many stories, the artist points out in some brief wall text. But at the end they seem to coalesce into one archetypal story. Something like the Stravinsky ballet, Le Sacre du Printemps. Not much of a story there either, in the sense of elaborate narrative, but archetypal. A primitive religious ritual murder of the virgin. To appease the gods, and preserve the annual cycle. Keep order in the universe. Stravinskyan. René Girardean.

Two or three sequences show parts of Loch Ness. But alas, no monster. No Nessie. (And she’d have felt so at home among the archetypes.)

Other work in the Jillian McDonald installation includes some sketchy wall drawings of some the shaman figures in the video. And in two show windows on Main Street—one door further downtown from the Market Arcade main entrance archway—two more videos. Of Scotland again, but again no stories. Scenes, landscapes, of an even more stark and taciturn character than in the shaman video. A woody heath. A swale exhaling mist. An ancient castle festooned with a rope of used car lot type little triangle flags. Welcome King Duncan.