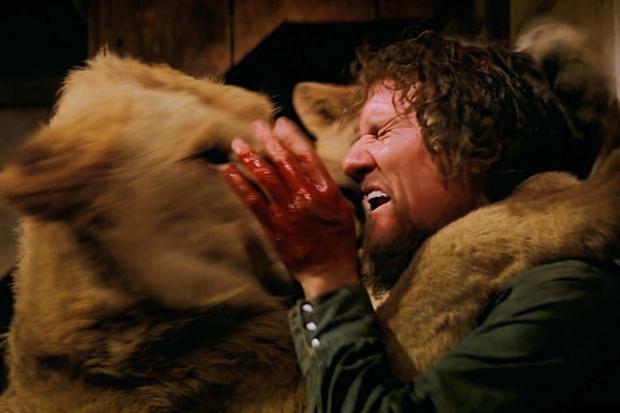 If ever a movie demanded the disclaimer, “Kids, don’t try this at home,” Roar is it. It does note at the beginning that “No animals were harmed in the making of this film. Seventy cast and crew members were.” None were killed, a miracle you can only appreciate by seeing the film.

Rescued from the dustcan of history (more on that later), this movie from 1981 is essentially 93 minutes of a family being attacked by lions. Mostly lions, anyway, though there are tigers on hand, along with other big cats and an even bigger elephant, which is seen fracturing the leg of Tippi Hedren.

Yes, that Tippi Hedren, star of The Birds. Her avian attackers in the Hitchcock film were faked. These animals are not. Also along for the ride are her two stepsons and her daughter, Melanie Griffith, who required reconstructive facial surgery after being mauled by a lion. She walked out on the production at one point, sensibly telling her mother, “I don’t want to come out of this with half a face.” (Coming back was perhaps not as sensible.)

Dad is played by—you can see this coming, right?—Noel Marshall, at the time Hedren’s husband. He’s also the producer and director of Roar, a movie I’m amazed to admit I never heard of until recently.

The story goes that Hedren and Marshall, who was her agent before they got married, were shooting a film in South Africa in 1968 when they became concerned about the fate of some big cats that were used in the production. On a visit to an African wildlife preserve, they were taken by the sight of a pride of lions roaming over an abandoned plantation house. They decided this would be a great basis for a movie that could help draw attention to the plight of endangered and exploited animals.

Back in Beverly Hills, they started collecting big cats, acquiring them from zoos, circuses, and animal control officers. As their menagerie grew (and their neighbors started to complain), they moved the 100+ collection to a ranch 40 miles north of Los Angeles.

Using funds he made as the producer of The Exorcist, Marshall began shooting what would eventually become a $5 million home movie. Casting his own family was the only option: Not only were they already familiar with their feline co-stars, no professional actor in his or her right mind was likely to sign onto such a project.

Although the cats were no longer wild, neither were they trained. Large amounts of time were spent waiting for them to do something as the camera rolled. Director of photography Jan de Bont, who went on to great international success as a cinematographer and as the director of films like Speed and Twister, kept five cameras rolling simultaneously to capture everything they did. (How he placed those cameras to remain hidden is the kind of thing one hopes will be on a making-of documentary when Roar is released on DVD.)

Using a slim dramatic structure—an African zoologist, involved in an experiment to share his living space with lions, invites his estranged family for a visit—Marshall’s hope was that his lions were so photogenic that he’d be able to get enough footage to edit into a feature: If there’s anything the internet has since proven to us, it’s that people love to look at movies of cats.

There certainly is lots of up-close footage of full-grown, healthy, active lions here. And it’s clear that the Marshall family is comfortable with them, or at least as comfortable as people can be. But it doesn’t take much for a 400-pound lion to cause damage to a relatively fragile homo sapiens. That blood you see on Marshall’s hands in an early scene did not come out of a bottle—it came out of the director-star.

The list of mishaps (see below) makes you wonder why they kept going with the production. Jan de Bont had to get 120 stitches in his head after a too-close encounter. Hedren fractured a leg in a scene (shown in the film) in which an elephant picks her up and tosses her around. Both Marshall and Hedren got gangrene from their multiple wounds. By the time you get to a scene for which they pour honey on Hedren’s face to entice a sweet-toothed jaguar to do what it might, you realize that you’re watching something that would even make Jackie Chan shudder.

A pair of floods that devastated the set sent their budget spiraling (and financial backers fleeing). By the time the film was finally completed, it had gained a reputation as the biggest disaster in history, and it was never even released in the US.

In the wake of Grizzly Man and the death of Steve Irwin, not to mention the endless atrocities you can see online, Roar may seem tame to thrillseekers expecting a Faces of Death experience. Dramatically the movie suffers from not wanting to be too scary. (Marshall and Hedren’s goal, after all, was to evoke sympathy and support for wild animals.) But knowing that everything in the film is real makes it a one-of-a-kind experience. It will have to be—no sane people would ever want to remake this.

One last bit of trivia: The script contains some contributions from actor Ted Cassidy, whom you will recall as Lurch from the original The Addams Family.

Roar opens this Friday at the Screening Room. Seating is limited: Get there early.