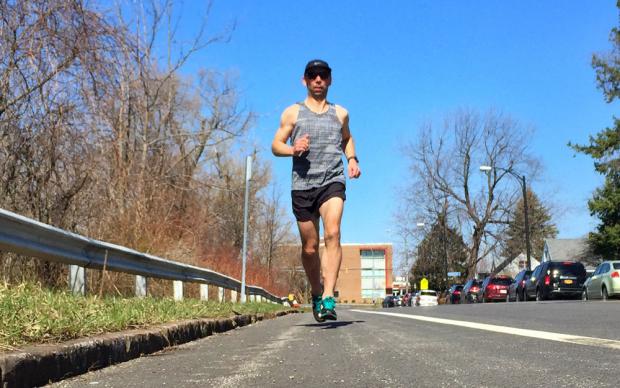 Jim Cielencki has a thirst for the unknown. No matter what he’s pursuing he goes into it with full force and explores all the possibilities.

A former BMX rider for Sunday Bikes and former co-owner of Sunday Skate Shop, Cielencki’s latest endeavor is running, which he began four years ago. Starting on New Year’s Day, he set out to run every street in the city with his Mile by Mile project. He plans to finish the project on May 29 when he runs the Buffalo Marathon, which includes the final streets he has left to run.

Originally from Cheektowaga, Cielencki moved to Austin, Texas in late 2009 and discovered their running scene.

“I lived in Austin, Texas and needed something else to do,” Cielencki said. “I decided I was going to train for a triathlon and I realized I can’t swim, but the running was really fun.”

When he decided to move back to Buffalo in 2014 he picked up on small details of the neighborhoods he had missed while away or had never noticed before while running.

“When I moved back from Austin I remember being like ‘that’s different’ and I told myself that this is like a ‘child’s eye’ and this is only going to last for a short period of time until you get comfortable, but I don’t think it has fully left.”

One day Cielencki was driving downtown on NYS route 33 and noticed four footbridges and realized he had driven under them numerous times, yet never crossed them on foot, so he decided to run to them from his house. From that day on his curiosity encouraged him to search out and experience every other neighborhood in the city while running.

“As a BMX bike rider, part of the things you do is explore because you’re looking for the next spot or the new obstacle,” Cielencki said. “So I was always in these areas, so that whole side of me just doesn’t go away.”

At the start of the year he left his house with the idea of running a route full of twists and turns to celebrate the New Year.

“I left my house and I went into the West side and up through Forest,” Cielencki said. “I spelled 2016 between Bird and Delevan. Then I did some of the marathon course on accident. I didn’t realize I was going to do [the Mile by Mile project] at that point. I’ve been refining the process of how to do it efficiently. I feel like a human Pac-Man in a sense. Dead ends are the worst.”

When he first came up with the unique challenge for himself he was prepared to run 1,400 miles and thought it would take about a year. After consulting with a friend he realized it was only about 700 miles and he had been counting curb miles, which is both sides of the street.

Due to Cielencki’s schedule, he ran four to five times a week, usually allowing him to complete 15 miles each day, as he would split it up, doing eight in the morning and seven later in the day. He chose to run mostly in the mornings because there are less people out and it’s better for taking photos, which he snapped each time he ran and would post on his @MILEBYMILEBFLO Instagram account. He started the account, apart from his personal one, to showcase not only what he observes on his runs, but also to share the intimate stories of the people he meets along the way.

“If they would talk to me, I’d let them talk,” Cielencki said. “It just opens up doors. One of the guys said he was the drummer for Lance Diamond and he played with Ike Turner and Boz Scaggs, and he was a boxer. For me it was just like ‘I want to hear about you, tell me your story.’ I’ve done that throughout the whole city. It’s pretty cool.”

As he comes upon any new neighborhood Cielencki makes sure to wave to people to let them know he’s approachable.  After being featured on Channel 7 in March, people have been recognizing him a lot more lately.

“When I was on Channel 7 I did a 20 mile run,” Cielencki said. “I started at MLK Park and we did like Genesee Street to Broadway with Sycamore in between. I just went up and down. About six to eight times people were like ‘Hey, I seen you on TV.’ Everyone over there has been super open. I ask people where they’re from and they’ll say ‘I grew up over here’ and they’ll tell me a story about it. I think this whole thing has come to be some sort of open source history.”

He also discovered the Wilson Street Urban Farm, which he had no idea existed. As he sprinted down the street he was greeted by the farmer and spent some time talking with him.

“For me it’s more about the photos and just discovering,” Cielencki said. “I have a million questions about the city, so I started reading more. I guess it’s just the realization of what’s out there.”

Cielencki’s friends often joined him on his runs, especially on Sundays when people in the community were going to church. Shawn Weishaar, who has known Cielencki for about two years, runs four to six times a week himself. Being from the Southtowns, Weishaar hadn’t really ran a lot in the city and enjoyed learning about all the new areas he was setting foot in. He also expressed his gratitude to have a knowledgeable tour running guide like Cielencki, who knows a lot about running and the city of Buffalo.

“He is constantly striving to be a better runner,” Weishaar said. “You can easily tell how passionate he is about running if you spend a couple minutes talking to him. Jim is all about growing and nurturing the running community. You have a question about running whether it’s an injury, shoes or just general advice—you go to Jim. He is always willing to help a fellow runner out.”

Some of the other memorable, and sometimes humorous, experiences Cielencki’s had while on his runs included passing by the house his mother grew up in on Schauf Avenue, running down Detroit Street where his dad’s house used to be before it was torn down, talking to veterans, helping a dad find his kid and meeting a guy who sang him The Wildroot jingle near the old Wildroot factory, which is located on Bailey Avenue.

“Joining Jim on this project has shown me what a creative mind he has and how much love he has for this city,” said Sarah Pinard, who met Cielencki about a year ago through Fleet Feet Sports Buffalo, a running store where he works. She runs with their training program and is a frequent customer of the store.

“He is incredibly passionate about showing this city and all its diversity to his community of friends, colleagues, and anyone who expresses interest.”

Though he hasn’t finished running each street yet—he still has a few sporadic streets left (including the Buffalo Marathon Route)—he did finish running each neighborhood on Monday, May 9 at 11:03 a.m. on Leonard Street, off of Kensington Avenue. He was congratulated by four neighbors working on a house.

“I was kind of emotional,” Cielencki said. “I was kind of like ‘Oh my God. This is it. This is like a great point’ and I’m just like ‘Oh, I gotta talk to all these people.’ It was kind of funny.”

All Cielencki has left now to do is the marathon route, which he will complete at the Buffalo marathon.

“We all go the same way and if you just take a different street or go a little further I guarantee wherever you live there’s something really unique. We live in a beautiful city and people who live in a certain neighborhood might be like ‘I don’t care’ or they just don’t even realize. Another man’s trash is another man’s treasure.”

Runner Jim Cielencki used this heat map to chart the streets he ran down.