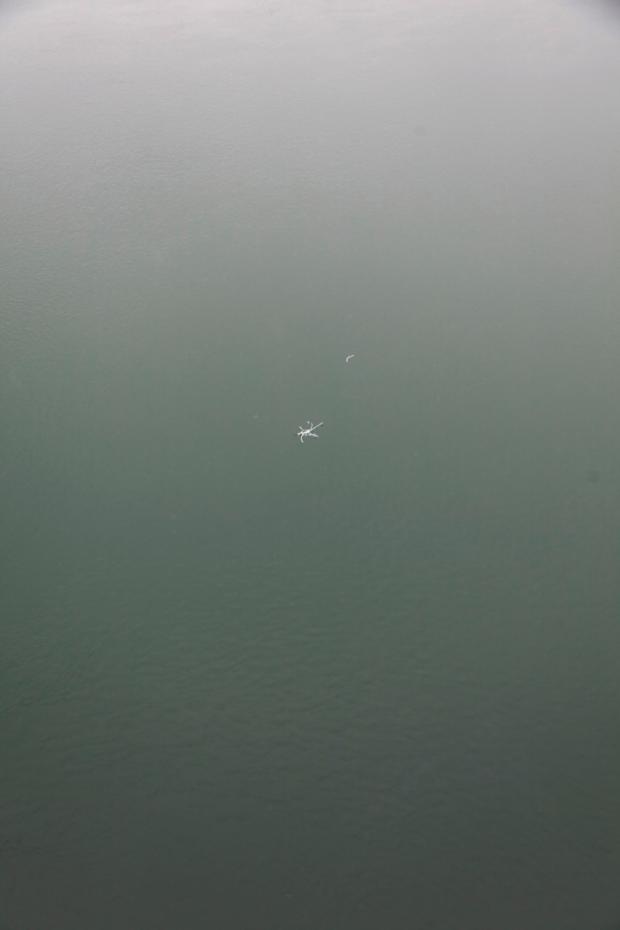 We’re familiar with Max Collins’s artwork. We’ve seen lots of it. Public art, in public places. Huge scale blown-up photos wheat-pasted on building walls and the like structures. Such as the gorilla on the front of the Hardware Café on Allen Street. Or Frank Sinatra on a garage door near Betty’s Restaurant. Or Roberto Clemente on a building on Niagara Street near Maryland. The pigeon hovering in flight, accepting a handout, on a wall somewhere downtown. The beautiful just eyes partial portrait on the Ro building on Elmwood.

Including photos about public spaces. The WNYBAC show last year of wheat-pasted on boards photos about the remake of the train tracks and sidewalks downtown to permit car traffic again on Main Street. (Including—just for the sake of irony—some re-photos of some of the grandiose concept drawings for the rail transit project and pedestrian zone. Downtown Buffalo as Taj Mahal.) Or largely abstract photos for the Belt Line railroad exhibit at Sugar City. (How you knew these were about the Belt Line was that all the photos in the exhibit—from numerous photographers—were about the Belt Line. It was a theme exhibit.)

Plus work in conjunction with other local artists. Collins’s signature wheat-pasted mural of Julian Montague’s cobwebs imagery in Montague’s spiders and their effects exhibit at BT&C gallery.

Most of the images Collins’s own—the downtown makeover photos, the gorilla, the Buffalo Zoo animal—but along with some other photographers’ work. Some public domain photos, such as the Frank Sinatra, retrieved from the Internet, or the Roberto Clemente, by one of the artist’s favorite sports photographers, Neil Leiffert. Or the Montague cobwebs images.

Collins’s current exhibit at the Castellani Art Museum marks a new direction for the artist, away from the public art—the representational art, photography by and large—toward an abstract, sculptural and to some extent performance art. More hermetic meditational. About nature and ritual. Life and death. Losing the imagery—the images are the things themselves, the sculptural objects—but retaining the wheat paste signature technique.

Not so much announces a new direction as confirms it. And not to say that he has once and for all abandoned his previous photographic imagery manner. But what’s in the current show is something very different. It consists of wrapped logs in white paper—office paper—wheat-pasted to the logs. In the gallery, and in a video included in the exhibit, in the woods somewhere. In unspecified locations. Hike though a woods sometime and you may come upon one of them. While they last. Paper pasted on logs in a woods won’t last forever. Which is a large part of the point of the work. Temporality. Transience.

Work inspired—instigated—in part by the tragic death of the artist’s girlfriend—her eyes on the Ro building—and in part by grad school. Collins just got his MFA degree from UB. This is his degree thesis show.

Work amply prognosticated by some of Collins’s other work of late that at the time seemed more by way of one-off—or sometimes, like the papered logs in the woods, unseen—than coherent artistic corpus. A wheat-pasted white small boulder among several larger unmarked boulders (on the UB campus) depicted in the exhibit flyer. Some similarly marked tree remnants—somewhat between stumps and sticks—somewhere in Niagara Falls, also shown in the flyer. Or the central work in a recent show at Hi-Temp. In a dark space, a mysterious stack circle of papered logs lit from within the stack and amid copious smoke machine smoke. The work was called “rien ne se crée,” from father of chemistry Antoine Lavoisier’s dictum, “Dans la nature, rien ne se perd, rien ne se crée, tout se transforme.” In nature, nothing is lost, nothing is created, everything is transformed. The work title excerpt a humility statement on the part of the artist. But more significantly, if nothing is created, nothing dies. A faith and hope statement.

In a brief discourse at the opening about the work and what it signifies, Collins talked vaguely about Eastern philosophy, and the idea of concealing to reveal. But above all, it seems to be about marking. How marking marks difference. Marks the sacral. The Zen stone in the garden. The pebble among infinite pebbles on the beach that Einstein stoops and picks up—selects—that results in our concept and model of the nature of the universe.

The video includes footage on the Hi-Temp exhibit and on wrapped logs in the woods, and documents the launching of a loose assemblage of wrapped logs into the Niagara River from one of the Grand Island bridges, and similar loose assemblage on fire and burning one night in what might be the Buffalo River. Evocative of various heroic culture funeral rites. Viking burning ship burials at sea. Funeral pyres. Patroclus’s in the Iliad, Achilles’s friend and lover and alter ego. (The “rien ne se crée” piece as a pyre.)

The Max Collins at the Castellani exhibit is called Natural Processes. It continues through September 11.