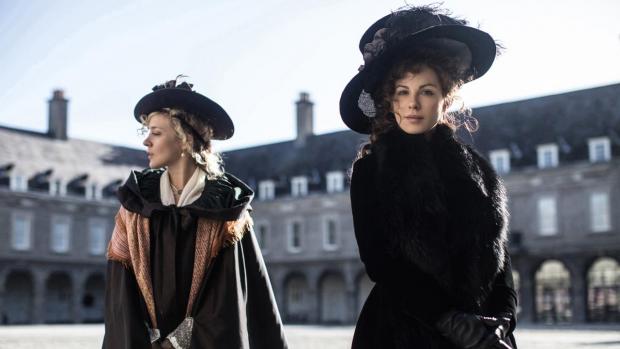 So you think you’ve got it tough? Forget your troubles by considering the hardships of the rich and/or famous in two new films opening this week.

Lady Susan Vernon (Kate Beckinsale), the femme fatale at the center of Love and Friendship, used to be well off until her husband died and left her and their daughter poorly provided for. This being England of the 1790s, her options are limited: find a suitable husband for herself and one for her daughter, and in the meantime cadge off of friends and in-laws.

Don’t feel bad if you haven’t heard of Lady Susan, the Jane Austen epistolary novella from which the movie was adapted: It was an early work that was never published in her lifetime. (Just to confuse matters more, the film’s title comes from an unrelated collection of Austen’s teenaged writings.)

And anyway, an early cousin of Pride and Prejudice or Sense and Sensibility is not what you’re going to find here. As adapted by Whit Stillman, who has made a career out of chronicling the lives of young, privileged Americans, Love and Friendship is a dryly funny story of a woman with no redeeming characteristics aside from her survival instinct.

To be clear, maternal instinct is not a virtue she’s rich in. Her teenaged daughter Frederica (Morfydd Clark) insists on getting herself kicked out of boarding school, and Susan mostly seems to want to get her off her hands. Of course she never admits to anything but the deepest bond between them: The gulf between what these characters say, in dialogue that requires an attentive ear, and what they actually think is one of the movie’s pleasures.

(By the same token, despite being a story about marriage, it’s hard to imagine any of these people getting naked and nasty, or even mildly disheveled and moderately rude. The inarguable evidence of sexual conduct at the end of the film was Stillman’s invention.)

The easiest path to getting her daughter off her hands is to attach her to Sir James Martin (Tom Bennett), a blithe nincompoop whose attempts to hold his own in polite society get the film’s biggest laughs. (His discovery of the pea—“A novelty vegetable!”—is priceless.)

The plot is episodic and the story somewhat overpopulated. Or perhaps it only seems that way given Stillman’s choice to introduce his characters at the beginning of the film with an onscreen title and comment. This does speed things up—he’s not the kind of filmmaker to run to epic length—but it does breed confusion in the early reels, when the story seems like it will be more dour than it turns out to be. You might want to scan a synopsis of the story before you see the film. Then again, you can also plan to see it twice: The dialogue alone offers enough riches to require a second viewing. It opens Friday at the Amherst and Eastern Hills Cinema.

A Bigger Splash is troubled by no such excess of dramatis personae. Until a police detective shows up in the final reel, there are essentially only four of them, all populating a lavish summer home on an Italian island.

Marianne Lane (Tilda Swinton) is a famous rock star recovering from throat surgery that has left her nearly mute. Her lover Paul (Matthias Schoenaerts), a documentary filmmaker, is tending to her, though recuperating from problems of his own. Barging into their idyll is Harry (Ralph Fiennes), record producer and Marianne’s former lover, accompanied by the college-age daughter no one ever knew he had, Penelope (Dakota Johnson). Will sexual tensions, lingering and new, rise to the steaminess of the region?

Mush of the pre-release publicity for the film has centered on the casting of Swinton, who bears an unmistakable resemblance to David Bowie, as a rock star. But don’t be expecting to see her in performance: She may as well be playing a cookbook author for all the difference it makes. Aside from a few flashback scenes, she never speaks above a tortured whisper.

The film will still appeal to that core fan base who is happy simply to gaze on Swinton, and Fiennes gives an energetic and uninhibited performance as a lout. (His Mick Jagger imitation is impressive.) Otherwise there’s not much to recommend this one. It’s a remake of La Piscine, a French film from 1969 starring Alain Delon. You’re unlikely to have seen it, and I mention it only because it offers an explanation for the ungainly shape of the plot: a pre-existing story clumsily adapted with inappropriate modernizations. The director is Luca Guadagnino (I Am Love); if there’s a reason why he gave this the same title as the 1975 documentary about painter David Hockney, I don’t know what it is. It opens Friday at the Amherst Theater.