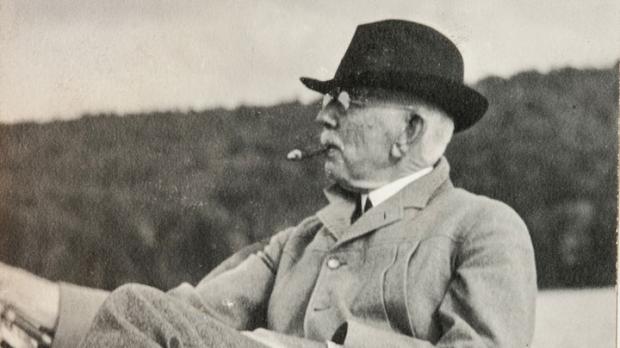 The Albright family, at least the three members of it who we know who used one, had an ambivalent relationship with the camera. First there was Raymond K. Albright. John J. Albright’s oldest son, born to him and his wife Harriet in 1875. Raymond was 13 years old when, in 1888 his parents, with him, his sister Ruth and his brother Langdon embarked on what is reputed to have been a 14-month tour of Europe and the Mediterranean. Despite my every effort, I was able to find no documentation—not  a passport, not a ticket, no diaries and no letters, no nothing—that supported a grandson’s claim that such a trip had indeed taken place. That is, at least, until I discovered in the archives of the George Eastman Museum several boxes filled with the clearly marked photographs of one “Raymond K. Albright.” There they were: photos, I knew from their port-hole shape, that were taken by Eastman’s first camera, the Kodak I, a hand-held box camera which, like our recent throw-away cameras, contained the images, one hundred of them, within the box which, when all photos were shot, were returned to Kodak in Rochester for processing.

The 13-year-old Raymond was an excellent photographer, and the collection at the Eastman, the largest collection of 19th-century travel photographs made by one photographer, are extraordinary. Perhaps most interesting for our purposes is the one that he took of a Greek Revival building outside of Athens which, when Albright asked Buffalo architect E. B. Green to design for him a brand new art gallery, clearly was the model that Green used. Other photos reproduced here are one of Albright himself being guided down Mount Vesuvius, Albright on a donkey in Egypt and, my favorite, an Albright maid hanging out the Albright family laundry to dry at their home at 730 W. Ferry.

Raymond K. Albright was a secret photographer. Indeed, as far as we know, he never took another photograph. His wife however, was drawn to these photos and when Raymond died in 1955, she took these photos, which obviously had been kept for almost 75 years, and gave them to the Eastman Museum. No one in the Albright family has ever seen these photos before.

Another “secret” Albright photographer was Charlotte Spaulding, whose family were neighbors of the Albrights at their summer home in the Adirondacks. Charlotte was drawn to the artistic side of photography and had become a disciple of Alfred Stieglitz and, it is rumored, a lover of Edward Steichen. It was through them that she learned how to make the gauzy, haunting and romantic photographs that were characteristic of the group of photographers known as “Photo-Pictorialists.” She took many such images in the early years of the 20th century but then, for reasons which we will never know, never took another photograph following her marriage to John Albright’s son Langdon Albright in 1908. She put her camera away, apparently forever. Indeed, it was not until recently that even her family members knew that once upon a time, before, perhaps the demands of marrying a scion of one of Buffalo’s leading families, seemed to have taken over, dousing in the process a creative flame that had burned for a few years anyway.

And then there was Susan. Susan Fuller Albright, the young woman  who Albright brought to Buffalo to help with the kids after his first wife Harriet died in 1895 and  married two years later. Working with a camera given her by Albright friend and colleague George Eastman, Susan took, between 1900 and her death in 1929, hundreds of photographs of her family. In addition to being extraordinary photos, the nine albums that contain her photos are a remarkable document of the life of a family over the course of the first quarter of the last century. Taken in their various homes and on their incredible tour of  Europe in 1912, it was the photographs of Susan Fuller Albright, which no person outside of the Albright family has ever seen before, that helped me to find a “lens” into the life of John J. Albright that was indispensable.

Mark Goldman’s new book is Albright: The Life and Times of John J. Albright. Goldman is hosting a weekend exploration of the industrialist and philanthorpist’s local legacy at the Albright-Knox Art Gallery June 2-4.