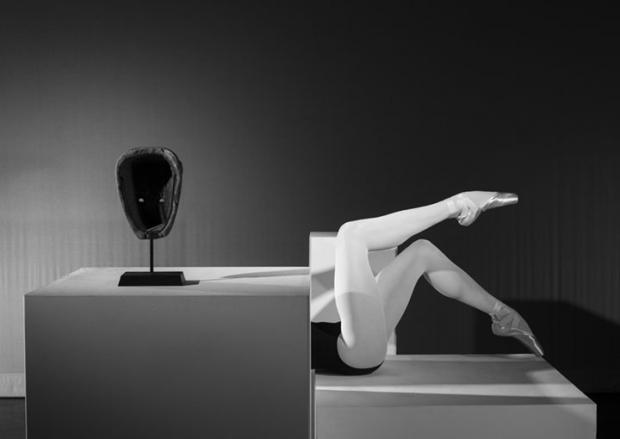 Anthropology and archeology and art in an amalgam in the current show at the UB Anderson Gallery called The Language of Objects. Part of an ongoing effort to make fuller use of the gallery’s extensive Cravens Collection of pre-modern-world cultural items. Bring the collection materials more into the current art world conversation.

The works on show are by three contemporary artists—Brendan Fernandes, Matthew Craven, and Alyssa Phoebus Mumtaz—enlisted to engage with and employ—whether physically incorporate, or spiritually, as inspiration—Cravens Collection artifacts in new artistic creations.

Fernandes—a Canadian of Kenyan and India Indian descent—makes the most explicit use of the artifacts. One portion of his work on show consists of African-origin wooden masks and white plastic 3-D printer reproductions of them, displayed such that the viewer can examine the masks and reproductions front and back. Back being important less for strictly aesthetic than anthropological and archeological reasons, and less in terms of the public ritual uses than with regard to individual users of the masks, due to trace remnants of sweat, skin, hair fibers of the users. Across the room is a photographic display of nine masks seen from the back, called Insiders, in reference to the inside versus outside of the masks, but also to the typical function of the masks in initiation rites of one sort or another.

Other Fernandes work in the show includes photos of classical ballet dancers in barre or floor exercise poses in juxtaposition with various of the collection masks, and several extreme minimalism sculptures, consisting of two or three armature wires each, suggesting—after a minute or so looking—human figures in classical ballet poses. Fernandes was a dancer until an injury closed off that career possibility for him.

And offsite—in the Main Street show windows of the Eleven Twenty Projects building—three masks of the artist’s own devising, of neon materials and monumental dimensions. So with a comic flair. Lest we miss the comic possibilities of the authentic African masks. The one with the Nixon nose, for example.

And final comic element—we’re back at the Anderson site now—the artist’s own design but New Era company manufacture exhibit commemorative baseball cap. A black hat with white mask embroidered logo. One of the Fernandes-design neon masks, actually. A hyena figure.

Matthew Craven—no relation to collection donor the late Annette Cravens, just to say, in light of the similarity if not identity of their names—has a number of anthropology/archeology homage works consisting of multiple disparate images of ancient to modern artifacts—the Venus of Willendorf to Brancusi’s The Kiss, Archaic Age Greek pots to Henry Moore wood sculptures—with titles like Monolith or Vision or Crossed. As a kind of object/concept game, perhaps. In each array, one or two items clearly reflect the title word or idea, and you have to figure out how the other items—as many as you can—also relate. How is a pot like a pillar?

Other Craven works consist of profusions of multi-colored geometric patterns. A sense of Southwest American Indian decorative impulse gone slightly out of control.

Alyssa Phoebus Mumtaz has a half dozen or so exquisite dyed handmade paper collaged on silk fabric works, representing or suggesting ceremonial garments laid out flat, like snow angels.

And series of photos of a string of ancient Islamic prayer beads—gold against an indigo backing—a little reminiscent of Man Ray photograms—in configurations suggesting snakes to snails to an Aladdin’s lamp to characters of the Arabic alphabet. And some elaborate minimalism pencil on paper drawings of looms and woven work in progress. Reminiscent of work of Agnes Martin. And Penelope.

An accompanying ancillary exhibit is on studies of Cravens Collection objects by UB students in archeology and anthropology and museum work. Individual students select or are assigned individual artifacts—all masks in this case—to research into provenance, date, usage, and whatever other relevant questions or issues or factors.

Nicholas Olson, an undergrad in anthropology, studied a handsome little Lega mask—from the Lega people, from what is now the Democratic Republic of the Congo—that he reports is “referred to as a ‘Lukwakongo’ mask, which translates ‘death gathers in,’ signifying…the perpetuity of initiated kinsmen.” He notes that “Lega art became highly prized and sought after following the Cubism movement…that had deep roots in African art.” (Indeed, this show as a whole—with its abundance of African masks—recalls no art history masterpiece so much as Picasso’s cubist seminal Les Demoiselles d’Avignon.)

The Language of Objects exhibit and ancillary student exhibit continue through July 30.