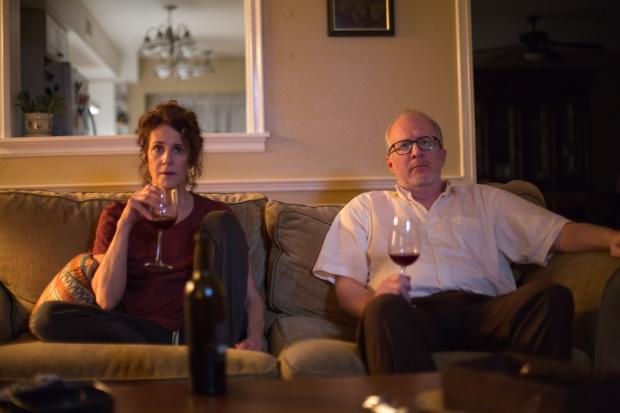 In 1981, philosopher and founder of the Harvard Film Archive Stanley Cavell published Pursuits of Happiness: The Hollywood Comedy of Remarriage, a study of seven screwball comedies (It Happened One Night, The Awful Truth, Bringing Up Baby, The Philadelphia Story, His Girl Friday, The Lady Eve, and Adam’s Rib) in which couples who seem perfectly matched are split apart but find their way back together. His discussion put a finger on something that made those movies, classics all, as emotionally satisfying as they are funny, the notion that couples occasionally need to break out of their safe patterns to bring their relationships back to life.

I hope Cavell gets a chance to see the new film The Lovers, at least before some callow young academic gets around to discussing it in terms of his book. It’s not exactly an illustration of his now commonly accepted arguments, but it takes off from them in interesting ways.

If ever Michael (Tracy Letts) and Mary (Debra Winger) were a perfect couple, it’s hard to see it. Middle-aged empty-nesters working at jobs that add nothing to their lives, each seems to live for only one thing, an extramarital affair. Michael has been seeing Lucy (Melora Walters), a dancer who teaches ballet classes to young girls; Mary has been cutting out to see Robert (Aiden Gillen, Game of Thrones’ Littlefinger). Each is certain the other doesn’t care, and neither seems to know that they’re not the only cheater in this house.

Both outside partners are pushing for permanence, and all that’s holding Michael and Mary separately back is inertia. When their son Joel announces a trip home from college with his new girlfriend, they decide that this will be the time: as soon as the youngsters leave, so will the oldsters.

But of course things don’t work out that way. (And who wants to see a movie where things work out the way you expect them to?) One morning Michael and Mary look at each other in a way they haven’t in years, and spontaneity erupts. And keeps erupting.

Fifty years ago, Hollywood hitmaker Billy Wilder was all but run out of town when he made Kiss Me Stupid, a comedy that suggested that a little adultery could be good for a marriage. How far we ‘ve come: The Lovers is arguably a movie which suggests that reconnecting with your spouse is just the thing to enliven your relationship with your lover.

As written and directed by Azazel Jacobs, The Lovers is both bawdy and sad, but never when you think it will be. It’s an actors’ showcase, despite the fact that neither star gets much in the way of the kind of soul-exclaiming dialogue you might be expecting. It’s wonderful to have Winger back on screen in a major role. I kept thinking that Letts’ role might have been taken by John Lithgow, whom he somewhat resembles, but the differences in the way they two would have played the part is the key to the movie’s success.

Equally important is the musical score by Mandy Hoffman. I haven’t heard anything by her before (she’s worked with Jacobs on other projects, including the HBO series Doll & Em), but it’s a remarkably mature contribution, using a full orchestra (her arrangements reminded me of Andre Previn) that does a lot to keep us from misinterpreting what we see on screen.

It would be just about impossible to misinterpret anything in Chuck, a likeable but awfully familiar boxing biography. Liev Schreiber stars as Chuck Wepner, a New Jersey boxer remembered for two things: standing up to Muhammad Ali for a hair under fifteen rounds in a 1975 fight, and for the movie that was inspired by that event, Rocky.

Wepner’s career was anything but glamorous, which would have been clear enough without plentiful clips featuring Anthony Quinn in Requiem for a Heavyweight: he wasn’t a very skilled fighter, and the basis for his success was his ability to withstand pain and stay on his feet. (He was nicknamed the Bayonne Bleeder.) He never made a living from the sport, and supported his family by hawking bar supplies.

But the bulk of his story as told in the film takes place after Rocky became a hit, firing a hunger for fame that had already been sparked by the Ali fight. This being the mid-1970s, cue the disco scenes, cocaine abuse, et cetera.

Canadian director Philippe Falardeau’s chief success here is making the era look as ugly as it was. What makes the film work at all is Schreiber, one of those actors who is watchable doing just about anything, even if he does it in an ugly pornstache and an uglier plaid overcoat. Enacting what is presumably Wepner’s own version of his story, he favors stoicism over pathos, which makes us respect the guy for facing up to his limitations more than we fret over his hardships.