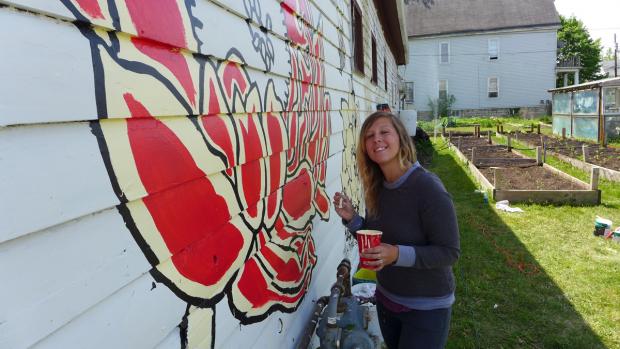 Giant flowers are blooming in the Old First Ward, at the corner of South Park Avenue and Hamburg Street. A workman’s cottage, owned by Bill Metzger, Gene McCarthy’s pub owner and Great Lakes Brewing News publisher, is having its western exterior wall festooned with a striking floral mural by Nicole Cherry. “Bill saw my art and we made a design together,” Cherry says. Metzger, who moved to the OFW in 2007, adds that he wants to “Lift the face of this neighborhood, I want to contribute art to it. I’ll be doing some art at Gene McCarthy’s. I travel to a lot of cities with my publications and in a city like Portland, Oregon it’s mandated that 15% of a project is put toward art projects. I wanted to do something within reach of me, financially.” Cherry, who studied art and design at Buffalo State College says “painting is mostly a hobby, this is my first big project ever.” The mural, begun on May 21, features (from left to right) a peony, calla lilies, irises, a tiger lily, a lotus flower and a chrysanthemum. “I’ll keep adding to it until it’s done.” Expect this colorful addition of public art when traveling eastward on South Park Avenue.