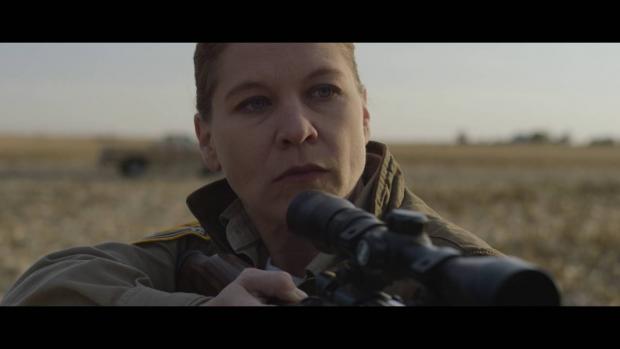 As friendly as the name may sound, you would have no reason to visit the town of Goodland, Kansas, a small town only slightly less flat than the surrounding terrain. (“You could watch your dog run away for three days,” as one local pithily notes.) So when a stranger with the unlikely name of Ergo Raines (Matt Weiss) stops at the gas station and asks if there’s a place he can get a room, it draw attention. Even Ida (Sara Kennedy), the precocious clerk at the decrepit local motel, can’t believe she’ll be booking a room: “You know the new hotel up the road has a pool?”

Ergo claims to be taking photographs for a book on the America that the changing economy has left behind. In the case of Goodland, that would be the oil boom. This sets off the bullshit meter of local Sheriff Georgette Gaines (Cinnamon Schultz), but her curiosity is diverted to a more pressing case, that of a drifter who ended up on the wrong end of a combine harvester.

Gee, do you think the two could be connected?

Death by farm equipment and a persistent lady sheriff should tip you off that we’re in Fargo territory, which if you ask me is always a fine place to be. And if that Coen brothers classic of rural noir and jet black humor set a high bar for those who follow it, debuting writer-director Josh Doke acquits himself admirably. A native of those parts, he has an eye for local color, dusty as it is, and an ear for the kind of dialogue that has marked crime thrillers since the heyday of Philip Marlowe. And he knows how to get effects on a minimal budget: a dire event inside a bank is depicted by a long silent shot outside it, broken only by a sound effect.

If Goodland has a flaw, it’s that this trim thriller (you could watch it twice in the time it takes to sit through one viewing of Avengers: Infinity War) sends you away with a few threads only partially unraveled: The final line of dialogue is a question that seems to pave the way for a sequel or a series. Which I for one would be happy to see. Check it out at the Screening Room this Thursday at 7:30pm, Saturday at 5pm, or next Wednesday at 7:30pm.

If you follow the news, fake or otherwise, you’ve probably come to think of it as a daily dose of despair. Even if you bear in mind that bad news is what sells, and a perpetual parade of horrors is the best way to keep viewers glued to their screens, it’s hard not to feel at times that the world is a snowball gathering speed as it rolls downhill.

You don’t need to be religious to get some relief for that despair from the new documentary Pope Francis: A Man of His Word, now playing at the Dipson Eastern Hills Mall. As the film demonstrates without belaboring the point, one of the signature traits of this Pope is his willingness to reach out to people of all (or no) faiths in an attempt to bring a message of hope to the world.

Filmmaker Wim Wenders, best know for showing angels regarding the foibles of humanity in his 1987 hit Wings of Desire, interviews Pope Francis and accompanies him on various trips around the world, to a Philadelphia prison, to the Philippines in the wake of a typhoon, to refugees who have survived crossing the Mediterranean sea, to a children’s hospital in Africa, to Yad Vashem, the World Holocaust Remembrance Center. Always remembering the saint whose name he took, he urges listeners to work for the common good, and to resist the global acceptance of indifference that urges us to ignore the suffering of others.

It’s not a probing documentary. Wenders, certainly a capable documentarian, doesn’t do much with his subject’s biography, or with the resistance he faces from conservative elements of the church he heads. (If you are of a Manicheanistic bent, it’s hard not to think of him as the anti-Trump.) But it’s genuinely inspirational, and these days that counts for something.

All the way through watching Claire Denis’s Let the Sunshine In, I kept thinking of Alan Rudolph, the independent director and Robert Altman acolyte who specialized in the 1980s and 1990s in wistful, jazz-tinged comedies about characters whose determination to find love was matched by their inability to get along with anyone. (He was recently the subject of a Manhattan retrospective, the first in years.)

If only Rudolph had made this film as well. Juliette Binoche stars as Isabelle, a middle-aged artist who has divorced her husband and is now despairing of ever finding love again. That may explain her penchant for affairs with married men, though even the single guys who come her way are clearly (to us, at least) wholly inappropriate.

But while Rudolph was able to find both humor and sympathy in the neuroses of his characters, Isabelle remains a cipher to us. Binoche gives the character her considerable all, and she’s a delight to watch, but that doesn’t stop us from growing frustrated with this woman.

I should confess that I have never seen a film by Denis that didn’t bore me to tears, an opinion not widely shared, so if you’re a fan don’t just take my word for it. Fans of French cinema will certainly want to see it for the all-star supporting cast, which includes Xavier Beauvois, Nicolas Duvauchelle, Josiane Balasko, Bruno Podalydès, Valeria Bruni-Tedeschi, and Gérard Depardieu. It opens Friday at the Dipson Amherst Theater.