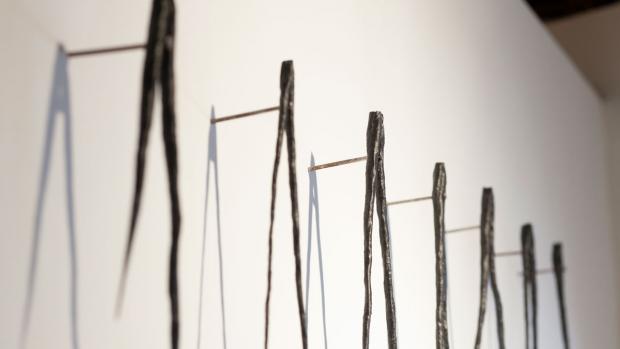 A doorbell to nowhere. A skittish ballet of tacks across a wall. A disembodied hand swiping over and over on a blank iPad. Delayed, a collaborative exhibition by artists Evelyne Leblanc-Roberge, Megan Metté, and Megan Scheffer, presents works that revel in their own absurdity. Deceptively simple in content and elegantly installed in Buffalo’s Big Orbit Gallery, the show is both delightful to take in and deeply affecting.

The artists, based in Buffalo and Rochester, begin the show with a question: “Are we suspended in a constant state of waiting?” Their works spin this question out across a diverse range of media—photography, video, drawing, sculpture, and sound. Many of the pieces emerge from a place of boredom, capturing what happens when one’s thoughts begin to wander. Delayed creates an environment in which the mind can play tricks on itself, recasting the mundane as something whimsical, beautiful, and sometimes unsettling.

Leblanc-Roberge’s works have often presented unique takes on classic tromp l’oeil illusions, and it is in her contributions to the show that the perceptual trickery is most apparent. There’s the iPad video of the swiping hand, but particularly captivating are two other videos from Les attentes—The Waiting, a series of works that deconstruct the artifice of standard waiting room decor. In one video, the image of a potted plant, spread across several sheets of paper, wafts in a breeze and slowly drifts away. In the other, a pair of hands keeps reconfiguring a set of tiny chairs. It is an exercise in futility, at once charmingly playful and existentially bleak.

Leblanc-Roberge’s other piece comes from the series Wall+Paper, which emerged from her correspondences with people serving life sentences in prison. According to the artist, some inmates described the sky, sometimes visible only through a small window, as just another wall. In The Opacity of the Sky, Leblanc-Roberge takes the description to heart: a lush cloudscape, spanning the entirety of the longest wall in the gallery, is rendered flat by the addition of crumpled scraps of paper and some improbably perched birds.

Metté, primarily a photographer, has focused much of her work on domestic spaces, using abstraction and careful framing to critique the idea of the perfect home. The images in her series Press, however, are caught between interior and exterior, with outdoor plants defamiliarized by the insertion of frosted glass windows and other transparent surfaces in front of the camera. The artist explains that the intent is to reassert control over her environment, transforming the passive state of waiting into an active state of creativity. The images, artfully arranged on the wall and floor, feel like portals to other worlds, an escape from the sterile gallery environment, yet they are also made distant by the haziness of the glass.

Vent, a companion sound piece, feels equally suspended between inside and outside. Created using sounds recorded in and around the gallery itself, the piece is dominated by the oppressive sounds of the gallery’s HVAC system, transformed into a mesmerizing drone. Traces of organic sounds from the outside world are occasionally allowed to sneak through.

Scheffer often uses her work to respond to the Diagnostic and Statistical Manual of Mental Disorders (DSM). In her contributions to the show, waiting becomes a matter of individuality, a state of suspension between categories in the face of the impulse toward labeling and cut-and-dry diagnoses for mental health issues.

For A Subjective Manifestation of a Pathological Condition, the artist constructed a bed of dandelions on the gallery floor. Scheffer notes that the dandelion, not quite a flower but not completely a weed, encapsulates the limits of categorization. In A Reductionistic Anachronism, a grid of dozens of ink drawings create a dizzying network of swirling lines. The work is too big to take in as a whole, yet individual details are equally elusive, as the lines become tangled in a chaotic web.

Each piece in Delayed is distinctive in its own way, yet the exhibition functions well as whole. Beyond the thematic resonance between the works, there is also a shared vocabulary of imagery—plants, grids, optical illusions—that lends the show a remarkable sense of cohesion.

Big Orbit Gallery, a CEPA Gallery project space, is free and open to the public on Saturdays from 12:00 p.m. to 3:00 p.m. A closing reception for Delayed will be held on Saturday, June 9, 8-10pm. For more information, visit cepagallery.org.