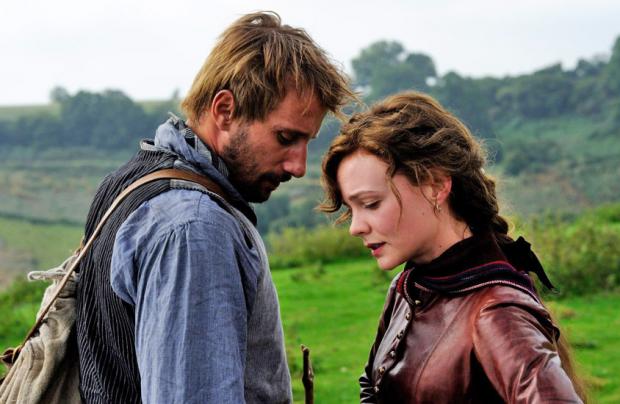 Did Thomas Hardy invent the Harlequin romance? I wouldn’t make that accusation against the great 19th century novelist whose stories were all set in the rural south of England. But when you strip his first successful novel of its psychological depth and social critique, the plot that remains rather resembles something you might find on a drugstore paperback rack with Fabio on the cover.

Carey Mulligan stars as Bathsheba Everdene, a young woman of independent spirit who is only certain of what she does not want, to be the property of a man. When she inherits a successful farm from her late uncle, she is determined to run it herself.

But being away from the city doesn’t release a young woman from social restrictions. She is courted rather bluntly by a neighbor, Gabriel Oak (Matthias Schoenaerts), whom she turns away even though his character is as sturdy as his name implies. When he is ruined by a spectacularly tragic stupid pet trick, Bathsheba hires Oak on her farm, further solidifying the distance between them.

A  successful local farmer becomes her next suitor. Though the more ironically named William Boldwood (Michael Sheen) is initially indifferent to her, he becomes intrigued by a thoughtlessly flirtatious gesture on her part. Recognizing that his wealth makes him an appropriate if unexciting match (his conversational high point: “I have some interesting pigs”), she holds him at arm’s length while she mulls over his offer.

It is the dashing but caddish Sergeant Frank Troy (Tom Sturridge) who manages to sweep her off her feet with a display of his swordsmanship (a bit of symbolism guaranteed to make high school literature students snicker). His pornstache notwithstanding, Troy arouses Bathsheba’s passions, and she makes a bad decision that will change the course of every life in this quartet.

At one point Bathsheba tartly notes that “It’s difficult for me to express my feelings in a language designed by men to express theirs.” It’s a line from Hardy, and more of this would have gone a long way toward making her a plausible proto-feminist. But on film she’s an opaque heroine, just as she was when Julie Christie played her in John Schlesinger’s 1967 film. That version ran for three hours. This one is a full hour shorter, which does not work in its favor: like red wine, Hardy needs room to breathe, and his novels would better be served by a long-form television format. Instead of simmering, the story is put on rapid boil. The climax in particular is so rushed that you feel like you’re being shooed out of the theater in time for the next seating.

Still, as Hardy heroines who find fate up against their will, Bathsheba fares rather better in the end than Tess, the d’Urberville lass whose tale was filmed so well by Roman Polanski. As directed by Denmark’s Thomas Vinterberg (The Celebration), long past his Dogme 95 strictures, this is a handsome production, sweepingly scored and beautifully photographed. It captures an element that was especially dear to Hardy, the details of farm life. For instance, do you know why you shouldn’t let a sheep eat too much clover, and what you have to do if it does? You will after seeing this movie, and that has to be worth something.