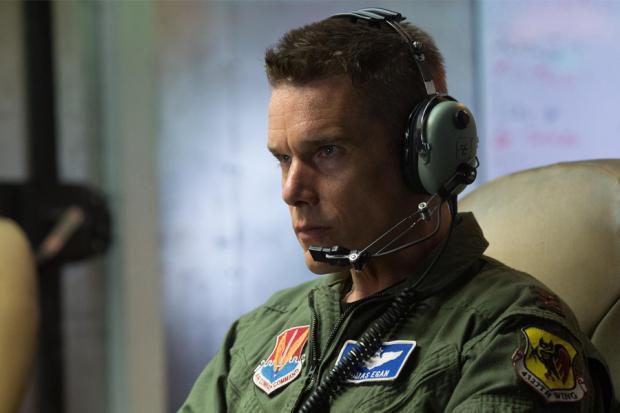 “It used to be when we’d go to war with a country, we’d go to the country,” says an authority figure in Good Kill. He’s talking about our government’s use of unmanned aerial vehicles—drones—as used to track and kill “enemy combatants” on the other side of the globe.

Ethan Hawke stars as Maj. Tom Egan, an Air Force pilot. He used to fly an F-16, and he was good at it. Now he sits in an airless metal room and tracks people on a computer monitor. Occasionally he is told to kill one of them, for reasons not known to him. Sometimes his strikes kill more than the intended person—they call that collateral damage. When he is done doing this for the day, he leaves and rives a few miles to his home in Las Vagas, with his wife and child.

The entrance to the drone command center may say “You Are Leaving the U.S. of A,” but it is located in the Nevada desert. Egan is something new in this history of warfare, a commuter soldier, which raises only one of the troublesome questions Good Kill wants you to think about: can a soldier be expected to be a warrior for only eight hours a day? Or is it too much to expect him to decompress and resume a “normal” life?

Here’s another question you’ll have to think about: can war become too sanitized? Can a man do this, kill people who not only pose no immediate threat to him but in fact don’t even have any idea that he is watching them, and remain completely abstracted? Egan has been in “real” combat, and he can’t make this adjustment. “I feel like a coward every day,” he says. “The worst thing that can happen to me is carpal tunnel.”

Of course as a decorated officer in his 30s, he’s older than most of the other drone operators, who are recruited from the ranks of video gamers. They’re expected to be able to push buttons without getting emotional about it.

Good Kill was written and directed by Andrew Niccol, who has made a career out of asking what we might do with new technologies once they’re fully developed: Gattaca, The Truman Show, S1m0ne, In Time. Here, he looks at one that is fully developed and points out that we really haven’t thought through what we’re doing with it.

If you think that UAVs are, in Ollie North’s phrase, “a neat idea,” you may be disinclined to see this. If that’s your stance, I’d guess it is at least partly because they can keep American soldiers, at least some of them, out of harm’s way. If so, see this movie. It asks different questions about the kinds of stress we put the men and women in our military to, and they are questions that need to be asked, even if you might not like the answers you arrive at.