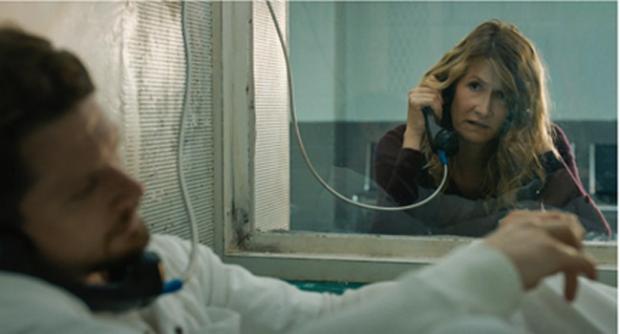 Lately there seem to be two kinds of movies in theaters: stories that could never really happen because they are physically impossible (gotta keep those CGI guys employed), and movies that claim to be based on real stories. Of course, phrases like “Based on a true story” and “Inspired by actual events” leave a lot of wiggle room, which is why Hollywood employs so many lawyers. (My favorite part of these is at the very end of the credits, long after everyone but me has left the auditorium, when there is invariably some lawyerly text that says, essentially, none of the people in this movie were real.)

As if to wrench the pendulum back from the likes of Endgame and Pokémon Detective Pikachu, there have been a bumper crop of these “reality movies” lately. Three recent ones vary in their approach to what the filmmakers want to do with whatever really happened.

The most straightforward is Trial by Fire, a film so unimpeachably issue-driven that it could have been made by Stanley Kramer. Mr Kramer being inconveniently dead, the film was instead directed by Edward Zwick. The film opens with a fire in a Texas shack that kills three little girls. From his behavior, the girl’s father, a shirtless guy so skeevy-looking that my first guess was that the fire started while he was cooking meth, is so clearly guilty of setting the blaze to kill them that the perspicacious filmgoer will immediately realize that he must be innocent. This takes some time to establish, during which Todd Willingham is tried, sentenced to death and jailed on death row for the better part of two decades.

Todd is portrayed by Jack O’Connell, who was subject to even worse indignities as the star of Angelina Jolie’s torture bio Unbroken. O’Connell is British and has moderately pointy teeth that give Todd a slightly feral appearance. As is standard for this genre, years of incarceration on Death Row bring out the best in him. He holds imaginary conversations with his eldest dead daughter and rattles off quotes like “To live is to suffer. To survive, you have to find meaning in the suffering.” Are punishment and suffering good for the soul? Maybe, but surely there’s an easier way.

It is this kindler, gentler Todd who is finally visited, through some particularly vague script contrivances, by Laura Dern as a divorcee and playwright involved with an anti-death penalty group. She starts digging into his case and discovers all kinds of holes in it.

Inspired by an article in the New Yorker, Trial by Fire does its best to smooth out a case that, while invaluable for anyone making an argument against the idea that justice is to be find in any small town Texas courtroom, to this day has a lot of unresolved issues. It doesn’t help that facts are revealed to us not chronologically but rather when they are dramatically useful. It’s a powerful enough viewing experience, but it doesn’t leave you with much hope for what to do about injustice other than to stay the hell out of Texas.

There is no apparent axe to be ground in The White Crow, a biopic of Rudolf Nureyev that culminates with his defection from the USSR while at a Paris airport in 1961, when he was 23. The dancer, to many the most famous male ballet star of the century, is played by Oleg Ivenko, a Ukranian-born dancer. How capably he is able to recreate Nureyev in the films many dance sequences is a question to be left to those more invested in the terpsichorean art than I: I can only say that if the real Nureyev (who died in 1993) was better than this, he must have been spectacular. Directed by Ralph Fiennes, who is as capable behind the camera as he is in front of it (he co-stars in the film as Nureyev’s teacher) from a script by the eminent playwright David Hare (The Hours), The White Crow shifts continually among different points in Nureyev’s young life in such a way to involve viewers rather than distance them (though one scene left me wondering how young Rudi got out of the woods after what appears to have been a character-building exercise by his military father).

The Soviets are somewhat more kindly treated by Red Joan, a film that has almost no relation to the character who inspired it. That would be Melita Norwood, the British woman who, when she was in her 80s, was revealed to have given the USSR government information that helped them build their own nuclear bomb.  The elderly Joan is played by Judi Dench, usually reason enough to see a movie: even if she’s not in much of the film, her scenes with her son, a conservative barrister who knew nothing of this part of her past, are a delight. The bulk of the film follows the development of Joan (here played by Sophie Cookson) from a provincial university student who is brought out of her shell by a brother and sister pair of Russians. Joan is able to divide her loyalties too conveniently for the story to have the dramatic impact it should have, and the screenplay by Lindsay Shapero can’t even argue verisimilitude in its defense: the story veers so far from that of the real Norwood that Shapero had no excuse not to invent something more interesting while she was at it.