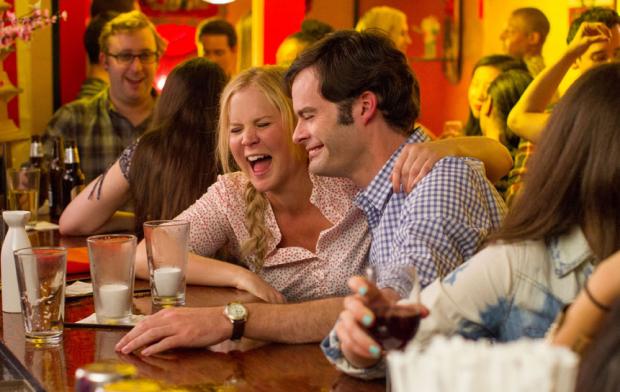 Hollywood never seems more like a treadmill than in summer, when it trots out one big movie per week, usually an animation or special effects extravaganza, that it expects everyone in the world to see. You can be forgiven for thinking that your options over the next few months are limited to, in chronological order, Tomorrowland, San Andreas, Spy, Jurassic World, Inside Out, Ted 2, Terminator Genisys, Minions, Ant-Man, Pixels, Mission: Impossible Rogue Nation, Fantastic Four, and Man From U.N.C.L.E.

Fear not: Just because your cinematic tastes are somewhere above the lowest common denominator doesn’t mean you have to avoid those nice air-conditioned moviehouses until September. The sci-fi comic book reboots may be getting all the publicity, but there will be plenty of other films to see, some of them even at your local multiplex.

Here’s what we have to look forward to these muggy months, with approximate Buffalo opening dates:

ALOHA—Because I can’t believe that the career of writer/director Cameron Crowe (Almost Famous, Jerry Maguire) is entirely kaput, all of his output since 2001 notwithstanding. May 29

LOVE AND MERCY—John Cusack seems awfully skinny to be playing the post-breakdown Brian Wilson, but even if worst comes to worst, this biopic will still include some of the most rapturous pop music recorded in our lifetimes. June 5

THE MAFIA KILLS ONLY IN SUMMER—Italian comedy recounting that country’s recent gang history through the eyes of a boy obsessed with politics. June 5

SAINT LAURENT—Biopic of the famed fashion designer (played by Gaspard Ulliel, whom you may remember as everyone’s favorite cannibal in Hannibal Rising) during his glory years in the 1960s and 70s. June 5

THE CONNECTION—A French magistrate battles a Marseille drug lord in a mirror-view of the story told in The French Connection. June 19

I’LL SEE YOU IN MY DREAMS—How is it possible that comedy about a widow starting a new life is the first time that Blythe Danner has  starred in a film? June 19

ALOFT—Jennifer Connelly and Cillian Murphy as a mother and son reunited after a 20-year separation in a drama that has been sitting on the shelf for over a year, never a good sign. June 19

MAX—Family drama about a dog that served with the US Marines in Afghanistan. Gotta be better than the film War Horse. Directed by Boaz Yakin (Now You See Me). June 26

BATKID BEGINS—When a major studio (Warner Brothers) releases a documentary at the height of the summer season, you have to suspect it’s something special. The subject is the effort behind helping a five-year-old boy with leukemia get his wish, to be Batman for a day. June 26

A LITTLE CHAOS—Alan Rickman directed and stars in this lavish comedy-drama as King Louis XIV, who hires a woman (Kate Winslet) to build a unique garden for his palace at Versailles. July 3

TESTAMENT OF YOUTH—Drama based on the autobiography of Vera Brittain (Alicia Vikander) and her experiences as a young woman during the First World War. July 10

TRAINWRECK—Judd Apatow and Amy Schumer. I’d buy stock in this if I could, especially given that it’s Schumer’s script. July 17

MR. HOLMES—Ian McKellen as an elderly Sherlock, hoping to solve the one case that has eluded him throughout his career as a consulting detective. Directed by Bill Condon (Gods and Monsters). July 17

SOUTHPAW—Having lost weight for his creepy role in Nightcrawler, Jake Gyllenhaal went to the opposite extreme to play a boxer here in the movie most likely to be moved to a fall release. July 24

INFINITELY POLAR BEAR—Mark Ruffalo gives the performance of his career in this comedy-drama as an unemployable manic-depressive father forced to care for his two young daughters when their mother (Zoe Saldana) has to leave them for 18 months. My favorite movie from last year’s Toronto Film Festival. July 24

VACATION—The inevitable reboot of the 1983 comedy, with Ed Helms leading a new generation of Griswolds on the road to Wallyworld. July 31

STRAIGHT OUTTA COMPTON—Paul Giamatti gets top billing in this biopic about the 1980s rappers NWA. The screenwriter is now working on a biopic of George Jones. Sounds pretty street to me. August 14

And a few that we can only hope some local theater will find room for:

A PIGEON SAT ON A BRANCH REFLECTING ON EXISTENCE, the third part of Swedish filmmaker Roy Andersson’s hilariously deadpan trilogy about human absurdity (the others are Stories from the Second Floor and You the Living).

THE YES MEN ARE REVOLTING—Socially conscious pranksters Mike Bonnano (a former UB student and Squeaky Wheel intern) and Andy Bichlbaum continue to pass themselves off as representatives of big corporations to bring attention to underreported issues that are not remotely funny. It may be the best Yes Men movie yet, and that’s saying something.

MANGLEHORN—We never got to see Al Pacino in Barry Levinson’s adaptation of Philip Roth’s The Humbling; hopefully David Gordon Green’s quirky drama with Pacino as a Texas locksmith shut off from the world and obsessed with a failed romance from his youth will make a local appearance on its way to Netflix and DVD.

THE END OF THE TOUR—Jason Segel as Infinite Jest author David Foster Wallace. Listen—you can hear the teeth gnashing!

Who doesn’t love going to the drive-in? One of the great things about summer in Western New York is that there are plentiful opportunities to enjoy cinema al fresco on a summer night. And if you haven’t been to one of our local drive-ins recently, you’ll be amazed at the improvements offered by digital projection and radio sound.

While rumors of the reopening of the Grandview in Angola are premature at best, we can still choose from the two-screen Delavan (33 miles from downtown Buffalo), the three-screen Sunset in Middleport (40 miles), and the four-screen Transit, just over the county line in Lockport (24 miles).

All offer double features of the latest hits, but the Transit has become a popular spot for family outings with its Retro Tuesday series. This summer’s schedule:

June 2: The Breakfast Club and Fast Times At Ridgemont High

June 23: The Princess Bride and Big

July 7: The Goonies and The Last Starfighter

July 14: The Sandlot and Field of Dreams

July 21: Smokey and the Bandit and Convoy

For those of you who can’t get the family into an air-conditioned theater early enough on a summer weekend, the North Park will continue its popular series of Saturday and Sunday morning matinees. To make a good thing better, they have recently added Warner Brothers cartoons to the show. Upcoming matinees include Matthew Broderick in War Games (May 31), The Lego Movie (June 6-7), Paddington (June 13-14), Harry Potter and the Deathly Hallows Part 2 (June 26-27), everybody’s favorite filmed-in-Buffalo movie The Natural (July 4-5), and the 1983 sci-fi cheeseball Krull (July 25-26).

After a successful launch last year overseen by veterans of the Toronto International Film Festival, the Niagara Integrated Film Festival will be back with four days of movies, food, and wine just a short hop over the Rainbow Bridge. The schedule hasn’t been finalized, but there will be a pre-fest screening of the new Pixar film Inside Out on June 14, and the opening gala will be the World War One coming of age story Testament of Youth, presented by director James Kent. NIFF dates are June 18–21. niagarafilmfest.com